The Senate Would Keep The Individual AMT, But Turn It Into A Very Different Tax

The individual alternative minimum tax (AMT) looks like it may survive yet another tax overhaul. But the latest incarnation of the tax may look very different from the current version. Instead of targeting primarily higher income taxpayers who live in high-tax states or have many children, the primary role of the Senate’s approach to the AMT in the Tax Cuts and Jobs Act (TCJA) would be to claw back the TCJA’s tax rate cuts for many rich, but not uber-rich, households.

The Senate Finance Committee had moved to repeal the individual AMT, but in a last-minute search for revenue, the full Senate retained the tax in the early morning of Dec. 2.

An individual AMT has been on the books since 1969, when Treasury reported that 155 high-income filers paid no income tax. In response to public outrage, Congress created a minimum tax as a brake on tax shelters. Congress tried to repeal the AMT as part of the Tax Reform Act of 1986 but instead ended up redesigning it.

The current version requires taxpayers to add a number of “preference items” to taxable income, subtract a special exemption, and calculate the tax liability under the AMT tax schedule. If this amount is greater than the regular tax liability, the difference is added to tax. The AMT’s rates of 26 percent and 28 percent seem flat, but its effective rates can be as high as 35 percent because its exemption phases out at a 25 percent rate over a wide range of income.

With about 90 percent of preferences eliminated from the regular tax, why would anyone pay the AMT? The answer: Because the Senate bill slashes individual income tax rates so much that all married couples with ordinary income between $290,000 and $765,000 would owe AMT even if they only claimed the standard deduction. In this simplest case, nobody with income outside this range would owe AMT. It turns out that single filers would be spared (because the Senate bill cuts tax rates more for high-income married couples than for singles), but they make up only about 10 percent of tax units in the affected income range. 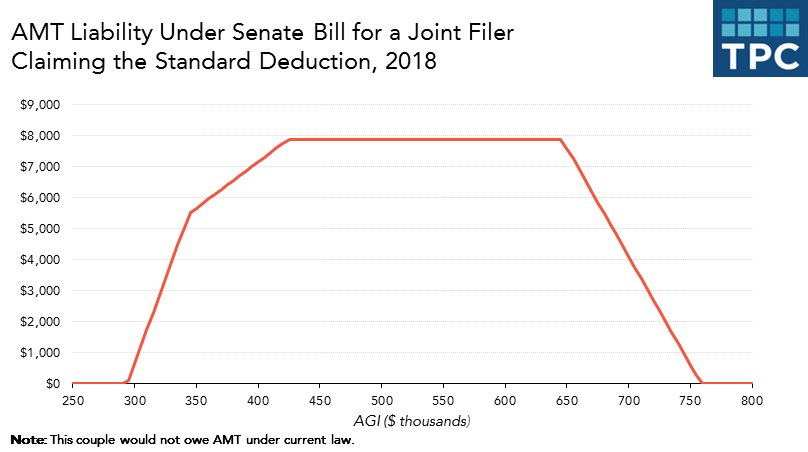 Most people in this income group would continue to itemize their deductions for expenses such as mortgage interest, charitable contributions, and property tax. But at least 80 percent of all households with AGI between $400,000 and $700,000 would be subject to the AMT. (Most of those unscathed are singles.) Because its exemption is higher, the Senate version of the AMT would apply to taxpayers with higher incomes than current law. In contrast, under current law, taxpayers with incomes between $200,000 and $500,000 are most likely to fall into the AMT. Overall, the bill would cut the number of AMT taxpayers in 2018 from 5.2 million to 2.3 million. 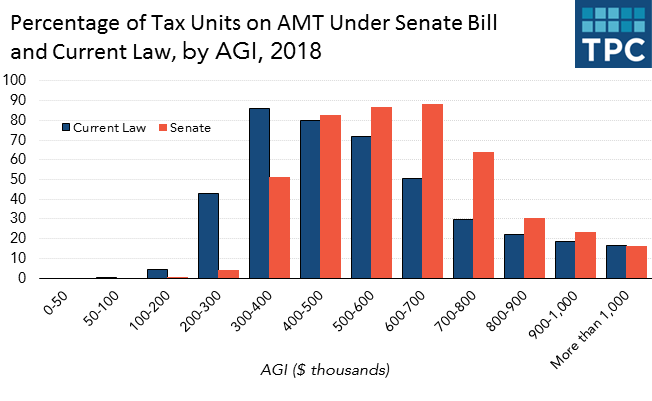 Real tax reform would eliminate the AMT. It is complex and unnecessary and perversely subjects many taxpayers to high effective marginal tax rates.  Since the Senate’s AMT mainly would undo a portion of its income tax rate cuts, it would be simpler and more transparent for Congress to raise income tax rates explicitly and ditch the shadow tax system.