About 82 percent of individual and business taxes due are paid voluntarily and on time. But not all taxpayers pay all they owe. Thus, the IRS is under pressure from Congress to close the tax gap—the difference between taxes due and taxes paid voluntarily and on time. The IRS can do a better job, but only if Congress gives it the resources it needs.

The most recent IRS estimate of the gross annual tax gap is $458 billion, based on tax years 2008-2010. Another $52 billion gets paid late, either voluntarily or through IRS collections. About $406 billion never gets paid.

The IRS promises to update those estimates, last published in 2016, within a few months. Using constant 2016 dollars, the Congressional Joint Committee on Taxation recently compared the tax gap trend for the first decade of this century.

While it’s tempting to see net compliance rates as falling, more accurate estimating techniques and the economic conditions experienced in the last study (the Great Recession) make that conclusion problematic. But we can say that the tax gap is stubbornly persistent.

What does the tax gap mean and how can we reduce it? I offer five observations.

First, the gap means that every day, non-payers shortchange the US Treasury by $1.25 billion. That’s an average of over $2,600 yearly for every tax filer.

Second, understanding the sources of the tax gap can help us design remedies. The tax gap has three main components. Two of them, non-filing and underpayments, account for about one-in-seven dollars of the tax gap. But underreporting income or improperly claiming deductions, credits, and the like account for 85 percent of the total tax gap, or $387 billion.

About $264 billion of that underreporting tax gap is from individual income taxes, and nearly half of that amount—about $125 billion—comes from underreporting by pass-through business filers such as sole proprietors, farmers, and those earning rental, royalty, partnership, and S-corporation income. They are prime targets for stepped-up enforcement. 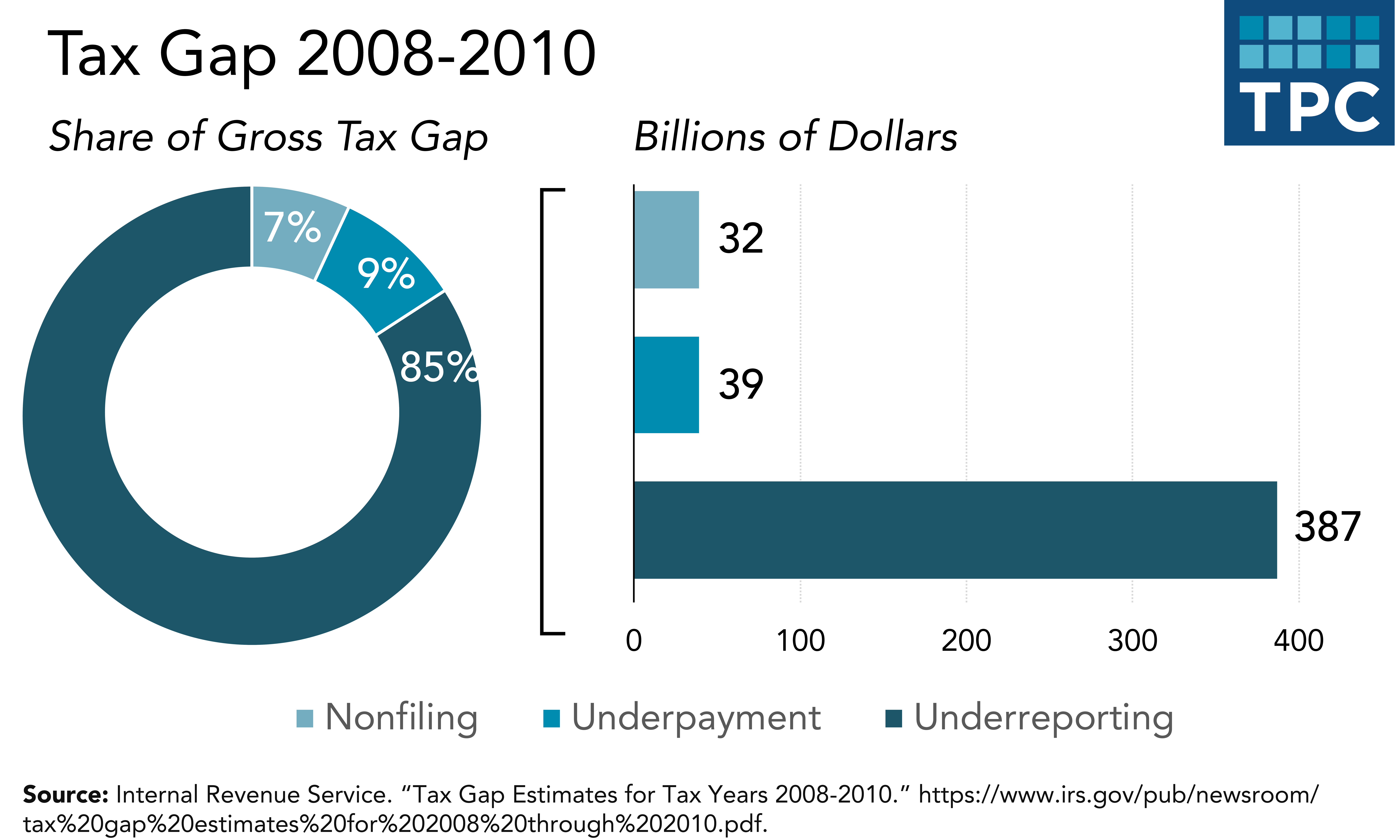 Third, audits are among the most effective ways to improve tax collections and should be increased.

But IRS enforcement staff has been pared by a third since 2010. With fewer resources, IRS audits in 2018 were only about half the percentage in 2010, especially among high-income taxpayers and giant corporations. The fraction of corporations being subject to audit in 2018 is down by a third overall since 2010 and the decline is half for the largest businesses.

Fourth, another key to strengthening compliance is better information reporting.

Because the IRS can match an employer’s wage and withholding reporting with its employees’ tax returns, the compliance rate for wage income is approximately 99%. But there is little or no third-party reporting on revenues or expenses for sole proprietors. Result: a compliance rate of only about a third.

Despite the obvious prime targets for tax collection, Congress has been loath to supply the IRS with the information tools and enforcement funding it needs to reduce the tax gap.

For example, Congress has failed to enact a number of recent proposals to boost compliance, including stronger oversight of paid tax preparers, increased IRS authority to automatically correct more tax return errors before refunds are issued, and mandated withholding for independent contractors.

Fifth, and finally, money is critical. Congress has cut the IRS budget by about 20 percent in constant dollars since 2010, which, says former IRS Commissioner John Koskinen, "amounts to a tax cut for tax cheats."

At the same time, Congress is asking the IRS to do far more with less. For example, Congress gave the agency a major role in administering the 2010 Affordable Care Act, the Foreign Account Tax Compliance Act, and other legislation that expanded IRS responsibilities.  Since 2010, though, Congress has cut IRS funding even as the IRS confronted a surge in stolen identity refund fraud and, recently, over a billion cyberattacks yearly. Without adequate resources, the IRS suspended efforts to pursue non-filers and suppressed collection notices and levy notices because it couldn’t handle the phone calls and correspondence they prompted.  All of these steps resulted from constrained funding and, collectively, they significantly shrank the IRS enforcement footprint.

If Congress really wants the IRS to reduce the tax gap, it needs to increase the agency’s budget and give it better information and enforcement tools. Closing the tax gap completely is not possible but more can be done. We will learn how much scope there is to narrow the tax gap when the IRS releases new data on this stubbornly persistent problem.