The Senate’s Tax Cuts and Jobs Act (TCJA) could reduce taxes by nearly three times as much for business owners in 2019 as for people who whose primary source of income is wages or salaries, according to a new analysis by the Tax Policy Center.

To put it another way, Joe the Plumber could get a much bigger tax cut as JTP LLC than as an employee of a building management firm. Similarly, a software engineer may pay less in taxes as a consultant than as an employee--even if she does exactly the same work at exactly the same pay. Or, a partner in a real estate development firm might get a far bigger tax cut than a surgeon employed by a hospital, even tough their income is the same. This violates a basic rule of good tax policy: that taxpayers with similar situations should be treated similarly. 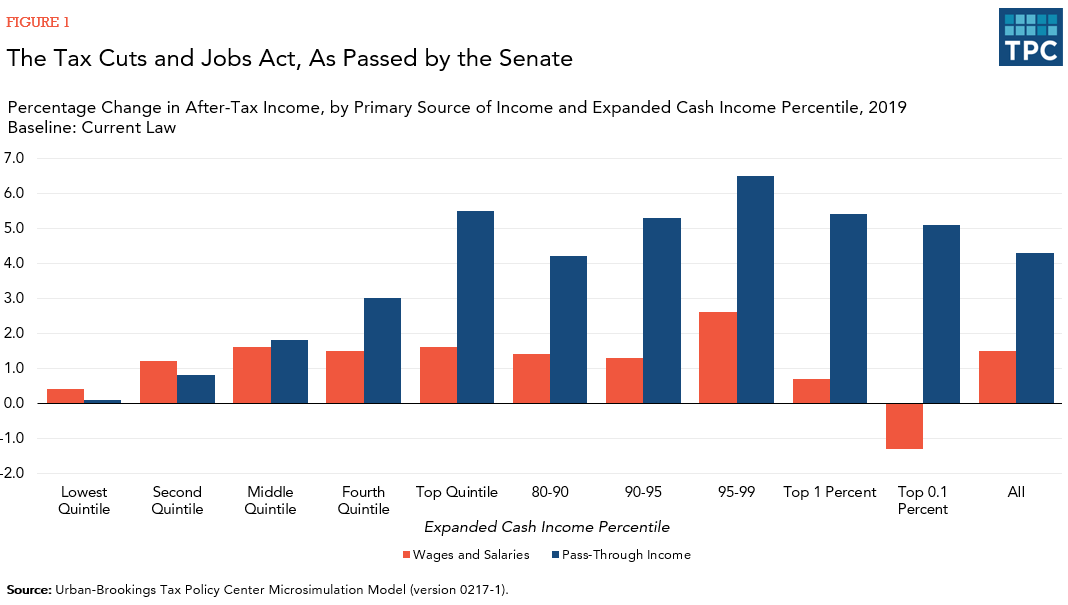 The Senate’s TCJA would significantly cut taxes for owners of pass-throughs businesses by allowing them to deduct 23 percent of their income when computing their individual income tax. For example, the Senate bill would tax wage income of top bracket taxpayers at 38.5 percent. But, after the deduction, it effectively would cut their top rate on business income to 29.64 percent.

Remember that these are averages. While the bill’s tax benefits would be broadly available to pass-through business owners, it includes some restrictions on access to the low rate. The Senate bill includes many complex rules aimed at preventing taxpayers from gaming the system. Some may fail and some may work too well. As a result, even pass-through owners who make equal amounts of money may pay different tax rates on their business income. But on average, taxpayers--especially high-income taxpayers--would be much better off owning their own pass-through businesses than working for someone else.