At first glance, the Senate version of the Tax Cuts and Jobs Act (TCJA), looks friendlier to families with children than the House plan. Rather than increasing the Child Tax Credit (CTC) from the current law amount of $1,000 per child under 17 to $1,600 as under the House version, the Senate would raise the CTC to $2,000 for each child under 18. But the increase would be largely offset by other proposed tax changes. For example, the Senate version of the TCJA significantly increases the standard deduction amount, but repeals personal exemptions.  And for low and moderate-income households who already receive a net refund due to refundable tax credits, the TCJA provides limited benefits.

Comparing the Senate version of the TCJA to current law, for taxpayers who use the standard deduction:

As with the House bill, the relatively few low- and middle-income taxpayers who itemize  deductions would see even smaller benefits or face a tax increase, relative to current law.

The table summarizes the Senate version of the bill. 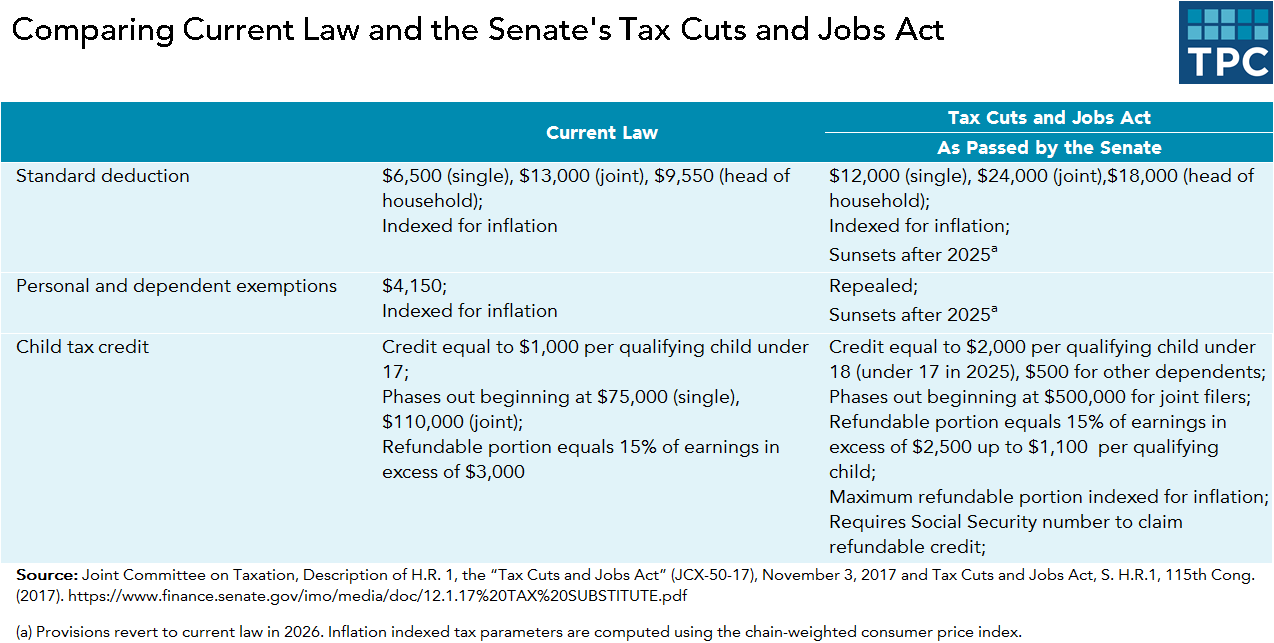 The lowest income parents of young children would pay slightly less in income taxes in 2018 (or get a slightly larger refund) under the Senate’s TCJA, largely because the refundable portion of the CTC would begin to phase in at earnings of $2,500 rather than $3,000. For every dollar earned over this amount, a family would receive a refundable credit worth 15 cents, until it reaches its maximum credit.  For many families, that would translate into an annual tax cut of $75 (figure 1 shows the difference between current law and the Senate version of the TCJA). 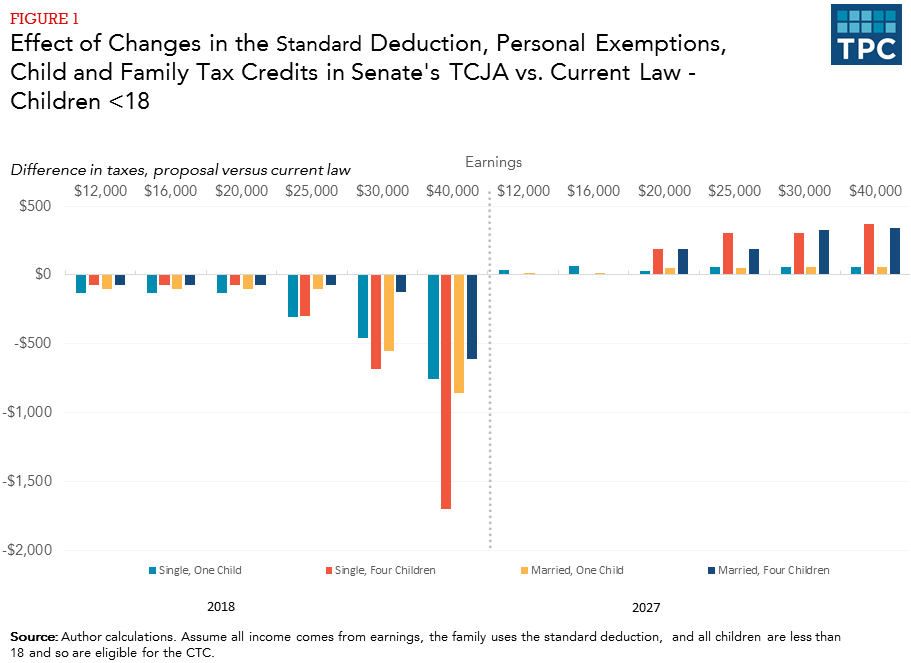 In 2018, married parents with children under 18 who earn less than about $25,000 tend to get smaller tax cuts than single parents with the same income and number of children. That’s because single parent families would owe about the same amount of income tax before accounting for tax credits, under current law and the TCJA. For these taxpayers, the benefit of a larger standard deduction is approximately offset by the repeal of personal exemptions. Single parents would qualify for a slightly higher refundable CTC under the Senate bill, but single parents could also offset positive amounts of income taxes owed with the expanded nonrefundable part of the CTC. In contrast, married couples with children at these income levels tend to have no income tax liability before accounting for refundable tax credits. As a result, they receive the same small benefits from the expanded refundable CTC, but the expanded nonrefundable CTC provides no additional benefit.

In 2018, low and moderate-income families with four children often see smaller tax benefits from the TCJA than a family with one child, whether headed by married or single parents. That’s because they, too, often only benefit from the reduced refundability threshold for the CTC – but don’t tend to benefit from other expansions to the CTC because they do not have positive income tax liability that can be offset by the nonrefundable portion of the CTC. 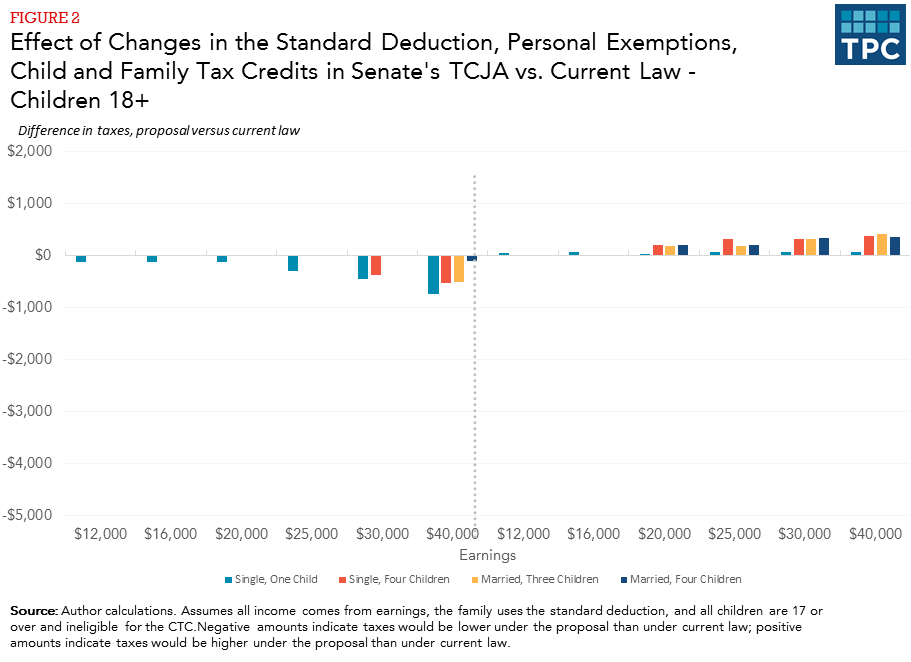 No matter how many children they have, or how old they are, almost all low- and moderate-income families would pay higher taxes after 2025, when almost all the individual provisions of the TCJA expire.  The one provision that doesn’t expire is the shift to a less generous method for indexing the individual income tax parameters for inflation, a change that would gradually raise income taxes for many households.

Senators Marco Rubio (R-FL) and Mike Lee (R-UT) tried to convince the Senate to include a $2,000 fully refundable (against payroll taxes) CTC in its version of the TCJA. This would have provided larger tax cuts to almost all families with children under 18, though not for families with older children. Unfortunately for low- and moderate-income families, their amendment was voted down.

Neither the Senate nor the House would meaningfully reduce taxes for low- and moderate-income families with children. And, if the expanded CTC in the Senate bill expires as scheduled, those families would pay more in tax than under current law.