Updated December 7, 2017: The version of the TCJA that passed the Senate on 12/2/2017 increased the pass-through deduction from 17.4 to 23 percent and reinstated the individual alternative minimum tax with a higher exemption level. An updated figure and table are available.

Ever since his presidential campaign, Donald Trump has insisted that Congress lower tax rates on income earned by pass-through businesses such as partnerships, S corporations, and sole proprietorships. Thus, he may be surprised to learn that the Senate Finance Committee version of the Tax Cuts and Jobs Act (TCJA) would impose marginal tax rates above 70 percent on some of those business owners.

Creating a low tax rate for income from pass-through entities without opening the door to potentially widespread abuse and a correspondingly large loss of tax revenue has proved to be a challenge for both the House and Senate tax writing committees. My Tax Policy Center colleague Len Burman circulated a table I made showing how income earned by pass-through entities would be taxed at a variety of rates in the version of the TCJA passed by the House on November 16. As many Twitter commenters noted, this provision needs its own postcard.

The Senate Finance Committee effort to create a special pass through tax rate has problems as well. This approach would allow a 17.4 percent deduction for qualifying pass-through income. So, a person receiving $100 of such income from a pass-through entity would pay tax on only $82.60 ($100 - $17.40). Thus, instead of paying the proposed top rate on ordinary income of 38.5 percent, it looks like pass-throughs would be taxed at a maximum rate of 31.8 percent (82.6% of 38.5). Seems simple.

But, not so fast.

Explaining all the details of the Senate Finance Committee’s pass-through provisions would require a team of lawyers, but one feature is worth highlighting: The new deduction would be limited for “specified service businesses” like doctors, lawyers, and accountants, and for businesses without sufficient wage expenses paid to employees. But those limits would not apply to taxpayers with taxable income below $250,000 ($500,000 for joint filers). And the benefit of the deduction phases-out rapidly, over an income range of just $50,000 ($100,000 for joint filers).

That means that individual taxpayers with pass-through income subject to the phase-out could face very high marginal tax rates for reporting additional income. How high?

Consider the example of a married couple whose entire income is “specified service” income generated by a pass-through entity and who claims the standard deduction. At an income of $524,000, the couple could take an $87,000 deduction (17.4 percent of the couple’s taxable income “without regard” to the deduction) that would reduce their taxes by $30,450 (since they are in the 35 percent tax bracket), but the deduction is entirely phased out at an income of $624,000. On average, that amounts to more than a 30% surtax on top of the 35% statutory tax rate over that range of income.

The actual phase-out is much more complicated, as the bill’s text released Monday night makes clear, because the deduction continues to apply even as its benefit is phased out. (If that sounds convoluted, it’s because it is.) The couple’s marginal income tax rate would jump to 61.375 percent at $528,541 of income. And it would rise to 73 percent until their income reaches $624,000 and the deduction is fully phased-out, at which point their marginal tax rate would return to the 35 percent ordinary income tax rate. (Note that these calculations do not include the additional 3.8 percent in self-employment payroll tax or the net investment income tax).

Here is how the overall tax rate schedule for pass-through income would look: 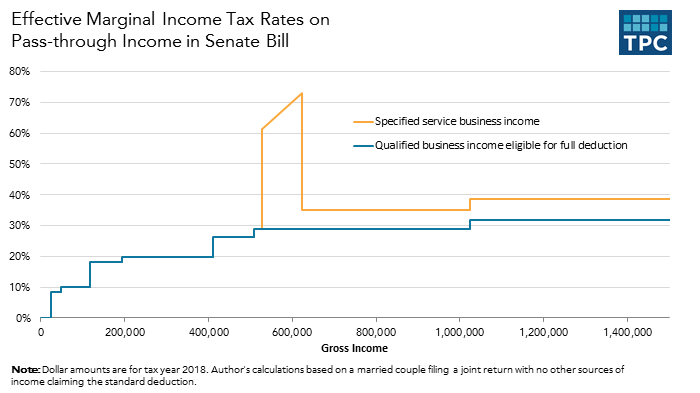 Perhaps this is what the bill authors’ intended. Or perhaps the phase-out range will be lengthened to prevent such high marginal tax rates, but that will raise the cost of the bill. (As a matter of legislative history, the income limits were increased in the Chairman’s Nov. 14th modification, but the width of the phase-out ranges were not changed.) Or perhaps this provision was pulled together at the last minute and is not quite ready for prime time.