The debate in Congress over the Tax Cuts and Jobs Act has attracted new attention to how government should tax alcoholic beverages. Lawmakers have  proposed reducing the federal excise tax on beer, wine, and spirits, with senators arguing that they serve as barriers to entrepreneurship. But these taxes do raise revenue –a 2016 estimate by the Congressional Budget Office said increasing these taxes could net 70 billion dollars over ten years. Do they also reduce the human costs that are associated with drinking?

Drinking alcohol can be harmful, both directly through health issues and indirectly through changes in behavior that increase other risks. Drunk driving is a prime example, and was implicated in more than 10,000 motor vehicle fatalities in 2015, equal to about 30 percent of all driving deaths. Those who argue for raising alcohol taxes often claim that higher taxes would reduce the injuries and deaths associated with drinking and driving.

The logic seems simple: If you increase the tax on alcoholic beverages, you make drinking more expensive, which should reduce how much people drink. However, while research does show that alcohol consumption drops when prices rise, our analysis finds that fatal alcohol-related crashes don’t follow suit.

Based on a new analysis coauthored with my Tax Policy Center colleague Robert McClelland, increasing alcohol taxes does not appear to reduce fatal crashes related to drunk driving.

We examined two alcohol excise tax increases enacted by Illinois in 1999 and in 2009. Those two changes took the state from a lower-than-average tax rate to the nation’s second-highest spirit tax in 2010. To understand how the tax change affected fatal auto accidents, we used the synthetic control method, which allowed us to create an alternative version of Illinois where the tax increases never took place.

We found that with each tax hike, alcohol-related fatal crashes in the synthetic Illinois tracked the actual Illinois.  In other words, neither tax increase changed the trajectory of fatal drunk driving crashes that Illinois already was on. 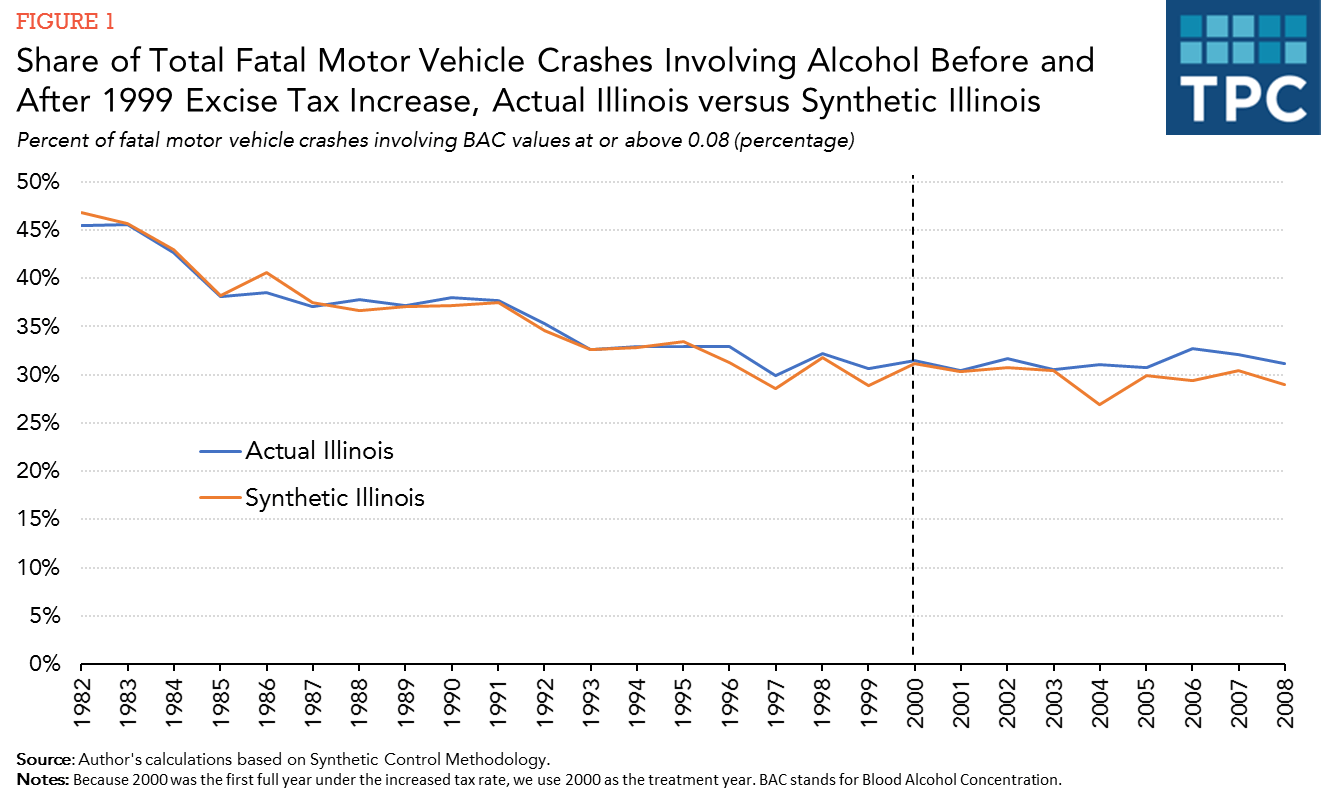 But if tax increases reduce alcohol consumption, why didn’t we see a reduction in the share of fatal alcohol-related crashes?  One reason is that not everyone drinks in the same way. Research indicates that heavy drinkers are less responsive to price changes than moderate or light drinkers. If heavy drinkers are responsible for more accidents and don’t reduce their consumption of alcoholic beverages in response to higher taxes, overall drinking could decline but drunk driving may not.

Another reason may be that alcohol excise taxes are relatively low as a share of the after-tax price of beer, wine, and other spirits. Thus, it might take a substantial tax increase to push drinkers to significantly change their behavior. However, Illinois increased its liquor taxes across the board more than we have seen in most other states, meaning that we likely have not yet seen a tax cut of sufficient scale to substantially change drunk-driving behavior.

It is also possible that taxpayers might be buying their alcoholic beverages in other, lower tax jurisdictions. This can happen with excise taxes on cigarettes, sugar-sweetened beverages, and saturated fats. Previous research on alcohol taxation has shown that people who live closer to a border will cross it to access to lower alcohol prices. Our study suggested this is correct. The 2009 tax increase led to a significant – if temporary – reduction in fatal alcohol-related crashes in the interior counties of Illinois, possibly because drivers there found it more difficult to avoid the tax increase by crossing state borders. While previous research has observed that consumers do cross national borders to avoid taxes, it is unlikely that this effect would be very consequential when considering changing federal excise taxes in the US. 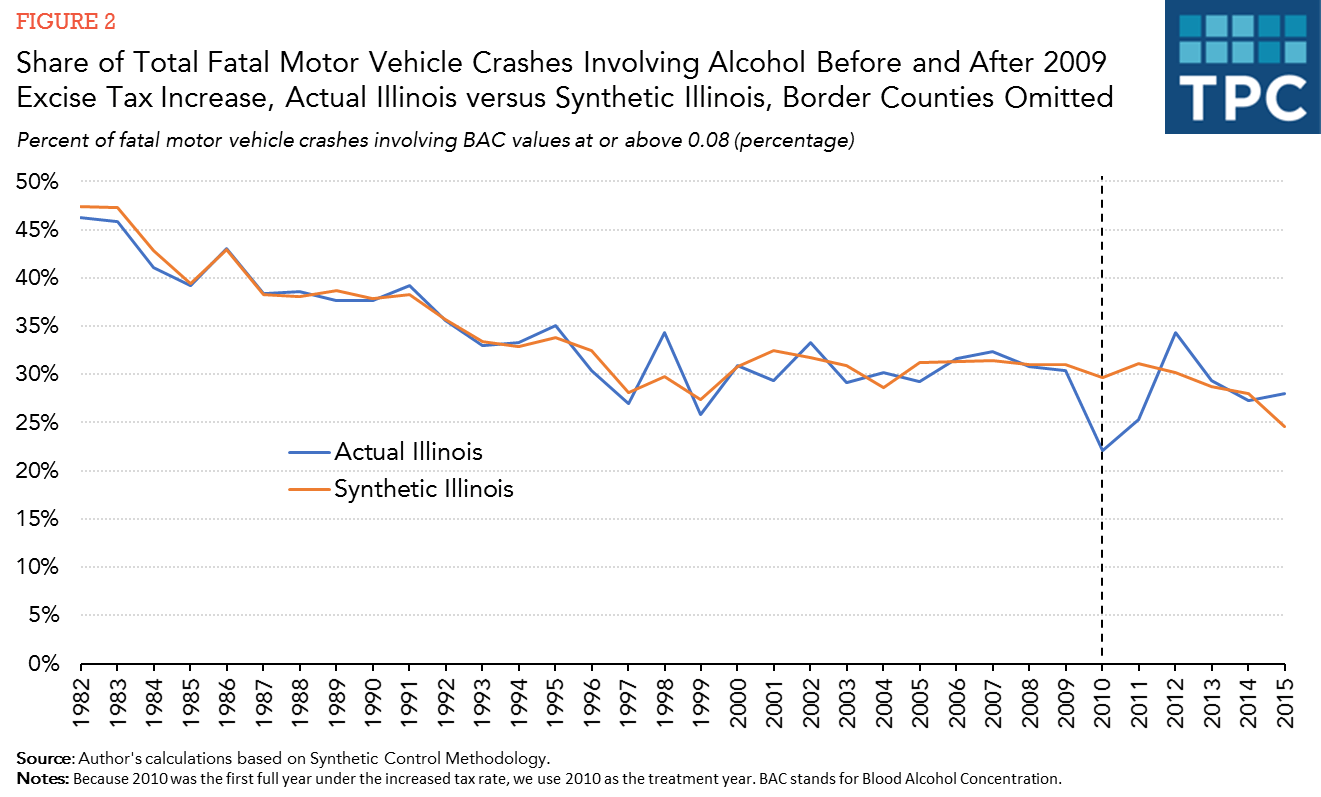 Although we have only observed the effect of tax increases on Illinois’ drunk driving rates of fatal accidents, and not the effect of a federal tax change, our results suggest that both federal and state policymakers who want to reduce the harmful effects of drunk driving may want to look for alternatives to raising alcohol taxes.