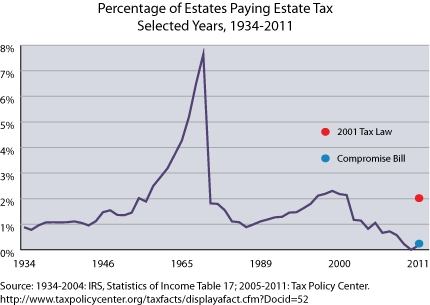 Resurrecting the Estate Tax as a Shadow of Its Former Self

For nearly a year, we’ve had no federal estate tax. The estates of those who died in 2010—including at least five billionaires—have passed to their heirs with nothing going to Uncle Sam. Compared to the estate tax in place in 2009, the tax hiatus cost the government an estimated $14 billion in desperately needed revenue.

The compromise tax bill worked out by President Obama and congressional Republicans would reinstate the tax for 2011 and 2012 with a $5 million exemption and a 35 percent tax rate. Though obviously a tax increase compared to what estates pay this year (i.e., nothing), that would be much less onerous for the wealthy than the $1 million exemption and 55 percent top tax rate that will take effect in January if Congress makes no changes. Absent congressional action, about 2 percent of estates would pay the estate tax (see red point on graph); under the compromise agreement, less than a tenth as many would owe anything (blue dot). That 0.2 percent would be the smallest percentage of estates owing tax since at least 1934 (other than 2010, when the one-year hiatus exempted every estate). 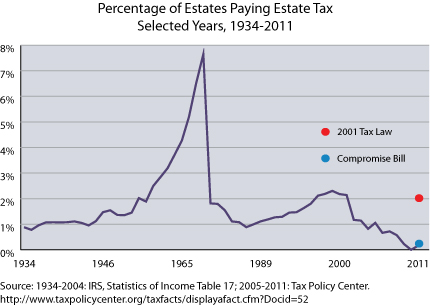 Those relatively few estates—just 3,600 by TPC estimate—would pay much less tax: an average of just over 14 percent of the estate’s value compared with about 19 percent if the law isn’t changed. According to the Joint Committee on Taxation, that will cost the federal government $68 billion in forgone revenue over the coming decade.

House Democrats have called for returning the estate tax to its 2009 level: a $3.5 million exemption and a 45 percent tax rate. That move would impose tax on a few more estates—an estimated 6,500 in 2011—and would raise the effective tax rate to roughly the same 19 percent that current law would claim. Making that level of tax permanent would save more than $35 billion over the next three years compared to the compromise proposal but would still lose more than $250 billion between now and 2020 compared to what would happen if Congress made no changes in the law.

Given the nation’s dire fiscal straits, with huge deficits predicted to swell rapidly, it’s hard to justify giving up nearly $70 billion in revenue that only the wealthiest two-tenths of one percent of people would pay. Congress and the president can justify many of the tax cuts in the compromise bill as stimulus badly needed while our economy is still weak and unemployment remains sky-high. But cutting the estate taxes for the wealthy will do little or nothing to boost the economy and only represents further fiscal irresponsibility.