Puerto Rico: Not Your Father’s Debt Crisis – or Your Greek Uncle’s

In a remarkable statement, Governor Alejandro Garcia Padilla announced this week that Puerto Rico’s debts are “not payable.” Nobody was really surprised.

The island can work its way out of this financial mess with a two-pronged strategy: An aggressive short-term effort to raise taxes, cut spending, and improve financial controls combined with a long-run plan to boost economic development. But it’s going to have to show bondholders that it’s serious. 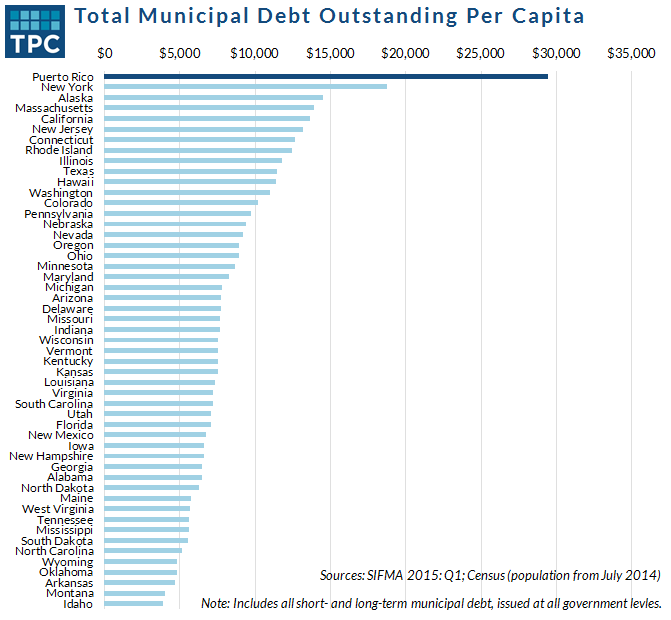 Puerto Rico has been mired in a recession since 2006. Its unemployment rate hovers near 12 percent, more than twice the U.S. average. Its residents owe more in public debt per capita than in any U.S. state.

A report that the commonwealth commissioned from three former IMF economists diagnosed the cause:  “structural problems, economic shocks and weak public finances have yielded a decade of stagnation, outmigration and debt.”

Part of the island’s problem is its status as a U.S. territory. It benefits from a dollar-denominated economy and access to U.S. trade, financial markets, rule of law, and regulatory institutions. It also enjoys a highly educated workforce and better infrastructure compared to many of its Latin American competitors. And, despite losing almost 5 percent of its population over the past decade, Puerto Rico’s out-migrants tend to be younger and less educated than those who stay, as is true in most developing countries.

At the same time, many aspects of Puerto Rico’s unusual relationship with the mainland have hurt the island.

Triple-tax exempt status – meaning that U.S. taxpayers pay no federal, state, or local income taxes on interest on bonds issued by the commonwealth, its municipalities, or public corporations – has allowed public debt to balloon.

Like Greece, Puerto Rico is part of a monetary union, so it can’t devalue its currency to boost exports or lower interest rates to spur investment. And it is still recovering from the loss, nearly a decade ago, of a federal tax credit – Section 936 – that exempted U.S. multinational corporations from taxes on Puerto Rican source income.

As a U.S. territory, neither the commonwealth nor any of its municipalities or public corporations can access federal bankruptcy protection. Unlike Greece, it can’t tap international lenders like the IMF. So what’s Puerto Rico to do?

In the near term, Gov. Padilla has proposed a “working group” to establish a 5-year fiscal plan, propose new spending cuts, and establish better financial systems and greater transparency. The group will also create a Fiscal Board to “guarantee the continuity and honor of the commitments agreed upon by us during the restructuring process.”

If this sounds confusing, that’s because it is.

Typically, struggling municipalities such as New York City in the 1970s or Detroit a few years ago turn to an outside control board or emergency manager to enforce fiscal discipline. Internal boards struggle to win the confidence of investors who will resist taking a haircut on their bond holdings unless they are sure the borrower has cleaned up its financial act.

Making matters worse, many recent investors are mutual funds and hedge funds that have now started circling the island after being only too happy to gobble up high yields in 2014 and earlier this year. They will be even less likely to stick around or stay out of court absent a credible workout plan.

Over the longer run, Puerto Rico’s legislature has already approved a Value-Added Tax starting in 2016.  Because it rewards investment as well as tax compliance, such a levy would be good for economic growth.  Although there is little chance Congress will bail out the commonwealth, or impose a control board as it did in for the District of Columbia in the 1990s, the federal government can also continue to help in incremental ways such as expediting the flow of already committed funds.

Puerto Rico will eventually emerge from this crisis, as the history of other defaults suggests. But economic development is a long game. Big new investment deals are exciting, but sustained growth takes basic building blocks like good schools, low crime, and investments to improve quality of life and lower costs of doing business.

The problem is all of these policies require money. Through a painful bankruptcy process, Detroit secured a “grand bargain” that included short term financing for quality of life investments. Creditors and other stakeholders should aim for such a resolution in Puerto Rico as well.

Full disclosure: I worked on Puerto Rico and other local economic development issues while serving as a senior economist with the Council of Economic Advisers from September 2013 to August 2014.