Indexing Capital Gains via Regulations is Still a Bad Idea

The Trump Administration reportedly is thinking about using its executive authority to redefine capital gains so only returns from the sale of assets in excess of inflation would be subject to tax. “Indexing capital gains” is seriously misguided for both legal and policy reasons.

Were it feasible, it would make sense to measure all income and expense in real terms since capital gains, like all forms of capital income, partly represent inflation. But indexing only capital gains make no sense.  It could cut capital gains taxes by up to $20 billion a year—nearly all for the richest Americans—and open the door to a raft of new, inefficient tax shelters.

I’d also be surprised if Treasury has the legal authority to index gains by fiat. Treasury is supposed to administer the law, not make it. Congress has had 100 years to define capital gains as net of inflation and has never chosen to do so. Indexing must have come up in Republicans’ deliberations about the Tax Cuts and Jobs Act. Presumably they chose not to make the change because of the cost or, possibly, because it would be terrible policy. President George H.W. Bush desperately wanted to cut capital gains taxes but Treasury Department lawyers concluded that only a legislated change by Congress could permit investors to index capital gains for inflation. Tax professors Daniel Hemel and David Kamin concluded that the legal case for indexing is even weaker now.

There are a host of other problems with applying inflation indexing only to capital gains. Here are the biggest:

Because capital gains aren’t taxed until you sell an asset, inflation is a smaller portion of your gain than it is for income that is taxed annually such as interest, rents, and dividends. To see why, think about two investments:  a $1,000 bond that pays 4% interest per year and $1,000 painting that appreciates by 4 percent annually. Assume inflation is 2 percent.  For the bond, half the $40 annual coupon payment (which is taxable income) is inflation. By contrast, the painting would be worth $1,480 after 10 years.  Of that $480 gain, $219 or 45.6% is attributable to inflation.

The inflation share declines as the holding period increases for the capital gains asset, but not for the bond.

Inflation overstates both capital gains and capital expenses such as interest and depreciation. If taxable gains are discounted while capital expenses are fully deductible, smart taxpayers will be able to generate large paper losses. This already occurs because of the lower tax rates on long-term capital gains. Current law attempts to limit this kind of tax arbitrage, but thee guardrails are already wobbly. Indexing capital gains would make even more tax shelter schemes profitable.

Indexing capital gains would add to our ballooning budget deficits

Because indexing proposals typically do not allow nominal gains to be converted into losses and since taxpayers would likely sell more assets if their effective tax rates were cut, the revenue loss might be smaller. But taxpayers could also increase the revenue cost by taking advantage of new sheltering opportunities.  On balance, I’d guess that indexing would reduce annual revenues by $10 billion-20 billion per year.

Some commentators have noted that the cost is small relative to the projected $1 trillion annual deficits, but that seems daft. As Will Rogers said, when you find yourself in a hole, the first thing to do is stop digging.

Very rich people hold most assets with capital gains. Therefore, the most well-off would reap the largest benefits from indexing the basis of capital assets. See chart. They are the biggest beneficiaries of last year’s tax cut that added nearly $2 trillion to the debt over the next decade. There is no reason they should get yet another windfall. 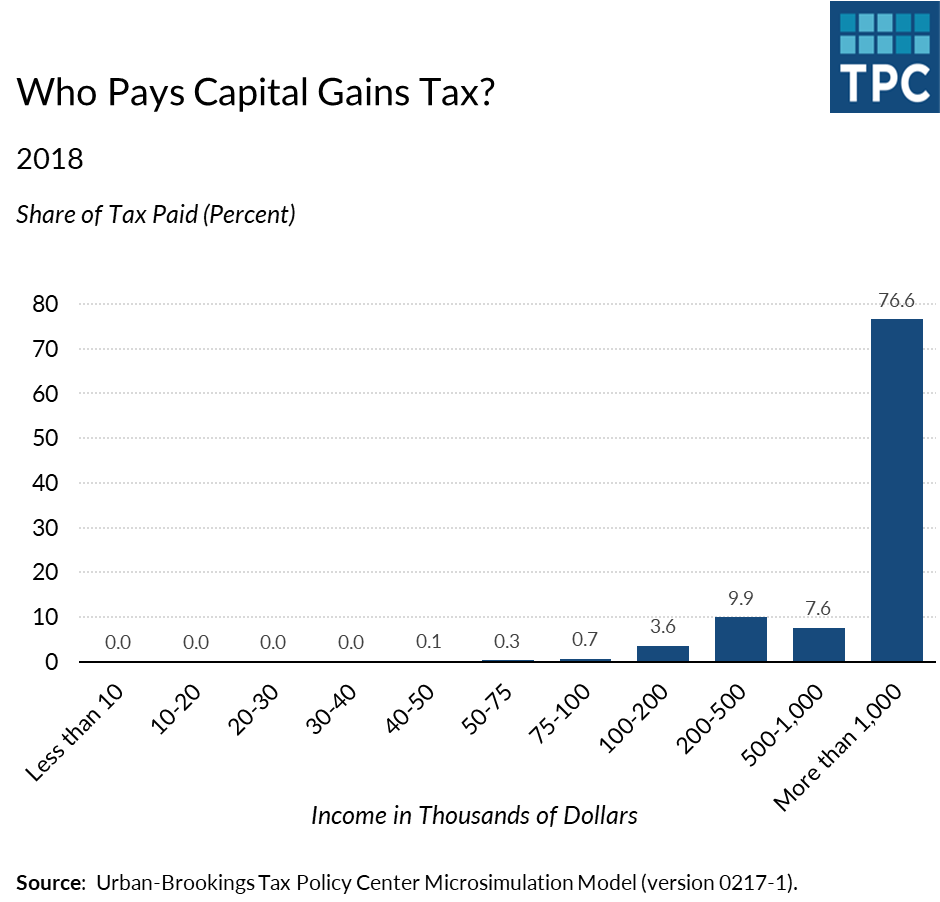 At first glance, indexing capital gains for inflation may seem like a good idea. But the closer you look, the worse it is. If President Trump really wants to cut taxes on capital gains, he should go to Congress with a plan to do so directly, and not through a poorly designed back-door regulatory scheme.

Note: This is an updated version of a blog I posted on May 10, 2018, after this idea first surfaced.