Most Taxpayers’ Benefits Come Mainly from the TCJA’s Individual Provisions, But the Rich Get Much of Their Tax Cuts from Corporate Changes

The Tax Cuts and Jobs Act (TCJA) affects the after-tax income of households in two ways: directly through the individual income tax and indirectly through changes in provisions such as the corporate income tax. A new analysis by the Tax Policy Center finds that, for the vast majority of households, the individual income tax provisions (which include tax treatment of so-called “pass-through” business income) account for most changes in after-tax income. However, for the highest-income taxpayers, cuts in the corporate and estate taxes drive much of the increase in after-tax income.

The TCJA made major changes to individual and corporate income taxes, estate and gift taxes, and certain federal excise taxes. But it is useful to separate the effects of individual income tax changes from other provisions in the law. Among the reasons: Most of the TCJA’s individual income tax provisions expire after 2025 and these changes have the most direct effect on taxpayers’ current after-tax incomes.

By contrast, the corporate changes are permanent and work through the economy much more slowly. TPC’s distributional analysis assumes that workers will eventually benefit from the corporate income tax cuts as increased investment boosts productivity and therefore wages. But that process will take years.

This figure shows how TPC calculates the effects of the two kinds of tax changes in 2018. 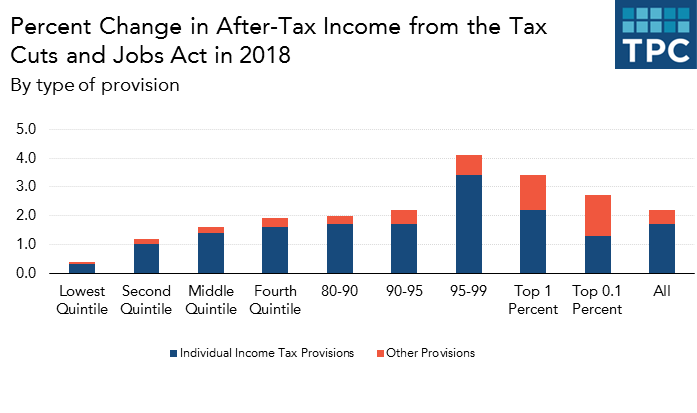 For all households, the TCJA will increase average after-tax income by 2.2 percent, with 1.7 percentage points of that increase (a little more than three-quarters) coming from the individual income tax provisions. The story is similar for middle-income households. Of their average 1.6 percent increase in after-tax income, nearly all (1.4 percentage points) comes from individual income tax changes.

But the picture is very different for the highest-income households, who are more likely to be capital owners and, thus, will benefit more from corporate tax cuts. Similarly, the highest-income households are most likely to benefit from cuts in the estate tax. For the top one percent, individual provisions account for about two-thirds of the overall impact, but for the top 0.1 percent they account for less than half.

Nearly all households will get a tax cut from the TCJA, at least until the individual provisions expire in 2025. But those tax changes will come from very different provisions of the law, depending on how much money you make.