Governors Talk Taxes in Their State of the State Addresses

It’s difficult to predict where states will end up on tax policy this year given last year’s budget drama and this year’s new federal tax bill. But if you know the political party of your state’s governor, it’s easy to figure out where they’ll start. In their annual state of the state (SOTS) addresses, Republicans touted tax cut plans they say will promote economic development, while Democrats were either silent on the topic or used their speeches to promote new energy taxes.

Some GOP state executives spoke about taxes even more than President Trump, who said “tax” a dozen times in his State of the Union speech, mostly promoting the Tax Cuts and Jobs Act. Seventeen governors (including two Democrats) topped the president and said “tax” (or “taxpayer”) more than 12 times. Maine’s Paul LePage led all governors by saying it 57 times. But another 16 governors mentioned “tax” five times or fewer, with Oklahoma’s Mary Fallin and Oregon’s Kate Brown saying it exactly once. 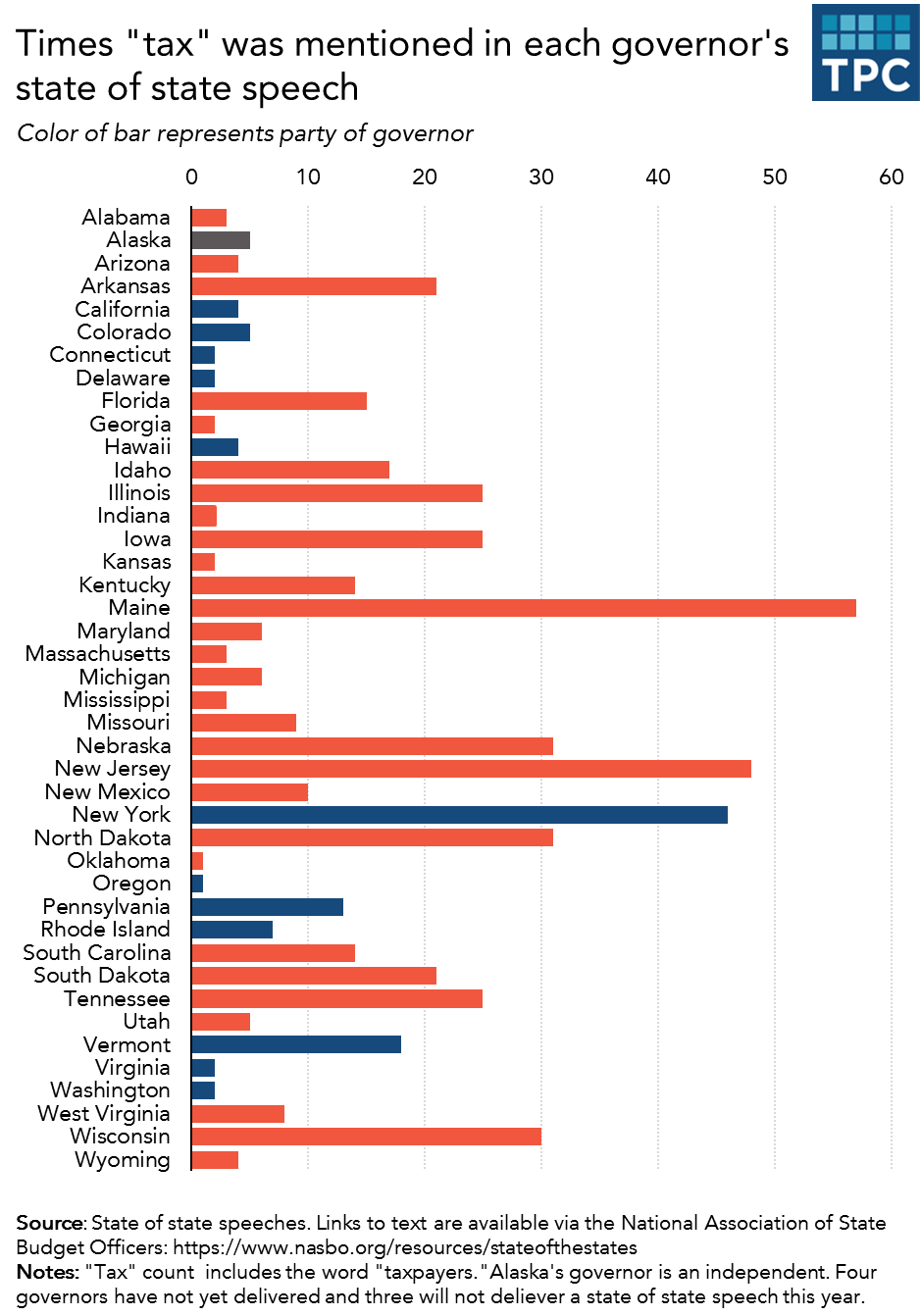 Two governors from states where tax cuts generated substantial fiscal fallout in recent years, Kansas and Oklahoma, had remarkably little to say on the subject this year. In his final SOTS speech, now-former Gov. Sam Brownback said “tax” only twice and never mentioned his controversial tax cut “experiment.” And Oklahoma’s Mary Fallin made only one mention of “taxpayers” even though her entire address was about the state’s budget problems.

However, the failed tax cuts in those states did not stop other Republican governors from championing new tax cuts in the name of economic growth.

While most Democratic governors avoided the tax issue entirely, a few pitched energy-related taxes of various kinds. Pennsylvania’s Tom Wolf spoke about the Keystone State joining 34 other states and enacting a severance tax. Wolf sold it as a way to keep taxes on families low, but it is not clear he’ll succeed. Pennsylvania’s been debating a severance tax for nearly a decade .

Washington’s Jay Inslee went even bolder, calling for his state to adopt the nation’s first carbon tax. He framed the idea as “simply joining our West Coast neighbors, and the rest of the world” in moving away from fossil fuels.

Colorado’s John Hickenlooper had a more modest request: raise the gas tax. Hickenlooper even tried to shame his legislature into action by noting that Utah has raised its gas tax rate twice since Colorado’s last increase 25 years ago. In fact, 23 states have hiked their gas tax since just 2013, and with few (if any) new federal dollars on the way, expect more to do so.

Wyoming’s Matt Mead was the sole Republican to talk tax hikes, asking his legislature to “continue to look at” increasing levies on lodging and tobacco.

While the new tax law has major implications for every state with an income tax, only six governors mentioned it. This is probably because most are still trying to figure out what exactly the TCJA means for their state.

One big exception was New York’s Andrew Cuomo who declared, “Washington has launched an all-out direct attack on New York State’s economic future by eliminating the full deductibility of state and local taxes.” Cuomo then previewed New York’s lawsuit against the law and its plan to get around the SALT deduction limit.

Republicans had a different perspective. South Carolina’s Henry McMaster called the TCJA a “great victory for American taxpayers” and an inspiration for his own $2.2 billion tax cut. McMaster’s plan is more a traditional tax rate cut than a tailored response to the new federal law, though. Idaho’s Butch Otter and Iowa’s Kim Reynolds also used the TCJA as “inspiration” for their own tax cut plans. LePage said Maine should maintain conformity with federal law, but only if it doesn’t raise taxes on Mainers.

Maryland’s Larry Hogan charted a “middle temperament” in his speech. As a Republican governor in a blue state he didn’t attack the TCJA but pledged to protect Marylanders from state tax increases resulting from it. Days later, the Maryland Senate unanimously passed a bill that lets Maryland keep personal exemptions even though Congress eliminated them from the federal tax.

The most common tax theme this year, however, was the victory lap governors took for previous tax cuts, which isn’t too surprising given most are currently ending four- or eight-year terms. In his final speech as governor, New Jersey’s Chris Christie said “tax” 48 times in a talk dedicated to his success at keeping taxes low. A few days later, his successor, Gov. Phil Murphy, used his inaugural address to support a millionaires tax.