According to new Tax Policy Center estimates, the refundable tax credit for low- and middle-income households proposed by Sen. Kamala Harris (D-CA) would cut taxes in 2019 by an average of about $3,200 or 1.8 percent of after-tax income. However, her plan would be extremely costly. Unless Congress agrees to offset the expense with other tax increases, her plan would reduce federal revenue by nearly $3 trillion over the next decade and by $3.4 trillion over the following ten years.

Harris, a likely Democratic candidate for president, calls her bill the LIFT (Livable Incomes for Families Today) the Middle Class Act. It is a refundable tax credit that would:

Her credit would provide generous assistance to low- and middle-income workers. About half of households would get a tax cut and nearly all the benefit would go to those making $87,000 or less.

Who would get a tax cut?

Households in the lowest 20 percent of the income distribution (who make $25,500 or less) would receive an average tax cut of $3,200, or 12.6 percent of their after-tax income. About 56 percent of that group would get a tax cut. Many of those who would not are older adults who have no wage income. 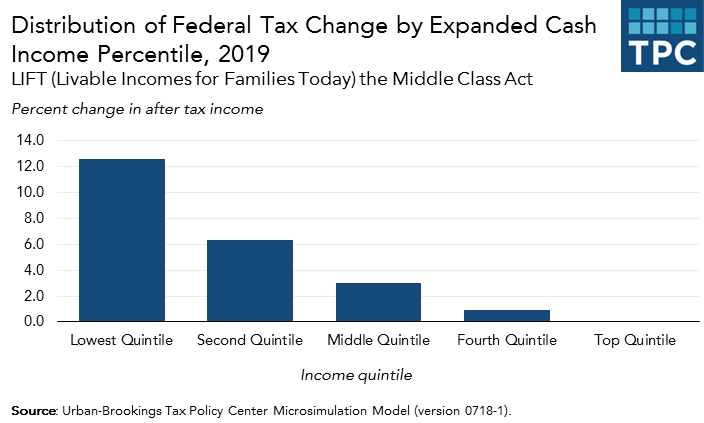 The plan would be easier to administer than today’s EITC because it would be based on the filing status of the tax unit (single, head of household, or married) instead of the number of children living in the home. Thus, in cases where children live in different households during a year (say with divorced parents or with grandparents) taxpayers won’t have to calculate where each child lives for the majority of the time—a test for EITC eligibility.

The very high phase-in rate provides a large incentive for some to enter the workforce – and also delivers the full credit to almost everyone who qualifies, including very low-income workers. Most people who work earn at least $3,000.

The bill’s economic effects will depend crucially on whether, and how, it is financed. Harris says she wants to fully pay for the plan. However, the two ideas she has proposed—repealing provisions of the Tax Cuts and Jobs Act that benefit taxpayers with income in excess of $100,000 and an unspecified tax on large financial institutions—would fall far short of that goal.

TPC estimates that, without offsetting revenue increases, the bill would boost the economy over the first few years by putting more money in the hands of low- and moderate-income people likely to spend it. Its work incentives also are likely to increase the number of low- and moderate-income people looking for employment or the number of hours they work. However, because the credit would phase out, it would raise the effective marginal tax rate on higher-income people, which could encourage them to work less.

Because Harris’s tax cuts would add significantly to the budget deficit, the bill would crowd out private investment and, over the medium and long term, slow economic growth.

If the bill is paid for with offsetting tax hikes, it would generate much less short-term stimulus but also be less of a drag on longer-term growth.

Harris’ bill is extremely ambitious and, in many ways, an improvement over the today’s EITC. But it also would be very expensive at a time when next year’s budget deficit is expected to top $1 trillion.