Investors respond to changes in capital gains tax rates, but less than you think

It is conventional wisdom that people adjust their investment patterns in response to upcoming changes in capital gains tax rates: They accelerate their gains if they know tax rates are about to rise, and they hold off on selling assets if they know that rates are about to fall.  But in a new paper, Tim Dowd, a senior economist at the Joint Committee on Taxation, and I found that while  investors do react to changes in capital gains taxes, the shift is much less dramatic than a simple view of recent history suggests.

Changes in the patterns of capital gains realizations are important for many reasons, including how new rates affect tax revenue. To better understand how investors shift capital gains in the face of imminent tax changes, Tim and I looked at the taxation of short- and long-term gains. If assets are held for a year (or less), gains from their sale are taxed like ordinary income (for instance, like interest income), but if they are held for more than a year, gains are taxed at a preferential tax rate reserved for long-term capital gains.

If investment decisions were driven only by tax rates, you’d expect investors who held stock for almost a year to hold off realizing gains for just a few more days until they could benefit from the lower rate on long-term capital gains. If investors foresee an increase in tax rates on capital gains income, they might realize gains earlier than they otherwise might have done. Further, you’d expect that investors would reduce their overall taxes by, on average, realizing larger gains when the lower long-term tax rate applies.

But we found that those surges exaggerate how much gains are shifted from one year to the next because they might include sales that would have occurred, all else equal, many years in the future.

When we plotted aggregate gains in 2012 by how many weeks the asset was held, we did find that realized capital gains declined as they approached the one-year mark, and then spiked in the weeks immediately beyond a one-year holding period. Using an econometric tool, we estimated how the pattern of gains would have looked if the tax rates on long-term capital gains did not fall for assets held for more than a year (this is the grey dashed line in Figure 1). 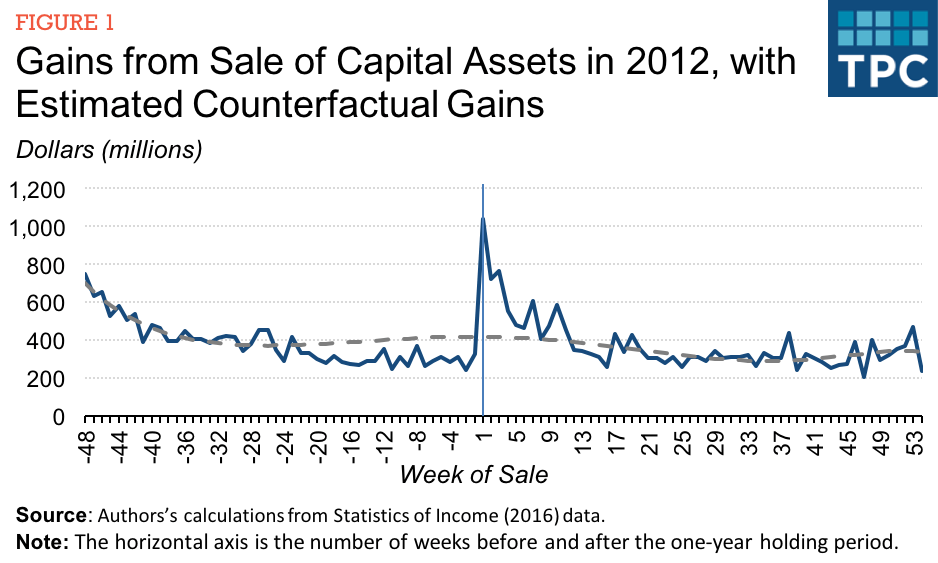 When we plotted the average gains each week, we found that they were much lower when taxed as ordinary income than when they were taxed at the lower long-term capital gains rate (these averages are the grey dashed lines in Figure 2). 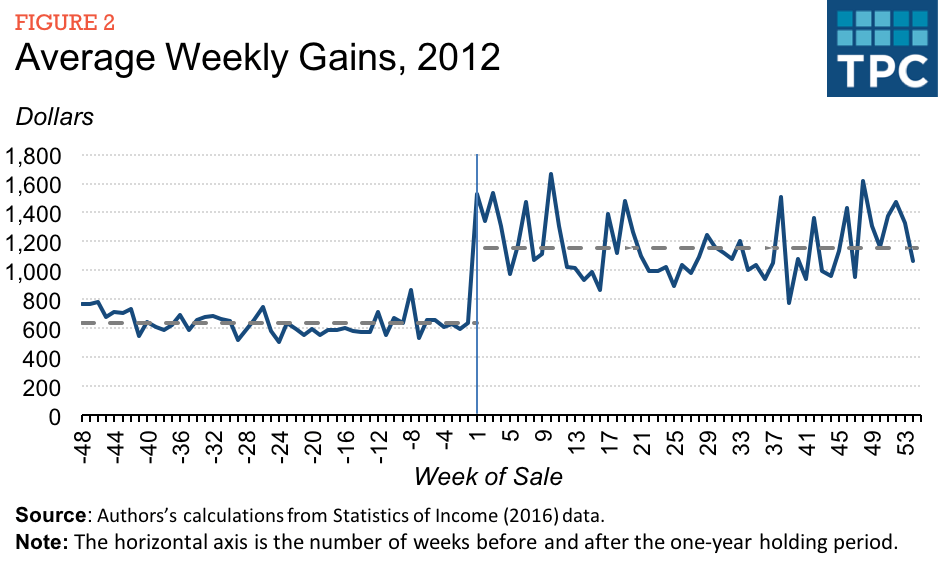 While both figures show that investors do respond to the incentives offered by the lower tax rates, the story turns out to be more complicated. We found that a large amount of capital gains were still being realized in the weeks leading up to the rate decline. And we found that investors moved only a small share of capital gains across the one-year boundary: A 10 percent decline in tax rates applied to long-term capital gains would delay realizations of only 2.2 percent of gains.  These estimates generally are smaller than those other researchers found using less robust data sets.

Investors clearly respond to taxes and increased rates lead to lower realizations. However, their timing of some realizations ignores the difference in tax rates. Why? In some cases, individuals are pairing sales of assets with accrued gains and assets with accrued losses, and so the tax rate does not matter.  From other research we know that there was a rush to sell assets at the end of 2012 ahead of a tax rate increase in 2013. It is also possible that some investors are simply unaware of the lower long-term capital gains tax rate.  However, none of these possibilities completely answers the question, and so there clearly is a role for more research in this area.