How the TCJA Affected the Housing Market

When the Tax Cuts and Jobs Act (TCJA) was enacted, critics claimed that reducing the tax subsidy for mortgage interest would hurt home values. But new TPC research shows that the reduced deduction had very little effect on the size of new mortgages, suggesting that the changes in the TCJA have not substantively impacted the housing market the way some predicted.

The tax code allows itemizers to deduct their mortgage interest payments for the year from their taxable income. But the TCJA reduced the advantage of itemizing in two key ways. First, it made taking the standard deduction more beneficial. The law nearly doubled the standard deduction from $6,350 to $12,000 for single taxpayers and from $12,700 to $24,000 for married couples filing jointly. It also capped the deduction for state and local taxes at $10,000. Since homeowners in some states tend to pay more than $10,000 in deductible state and local taxes, this further reduced the likelihood that homeowners would itemize and take advantage of the mortgage interest deduction.

Not surprisingly, the IRS found that the share of tax returns claiming the mortgage interest deduction fell from 31 percent in 2017 to 11 percent in 2018, though the reduction varied by income group. Higher income groups, who are more likely to own homes and other assets to itemize, saw the largest declines. 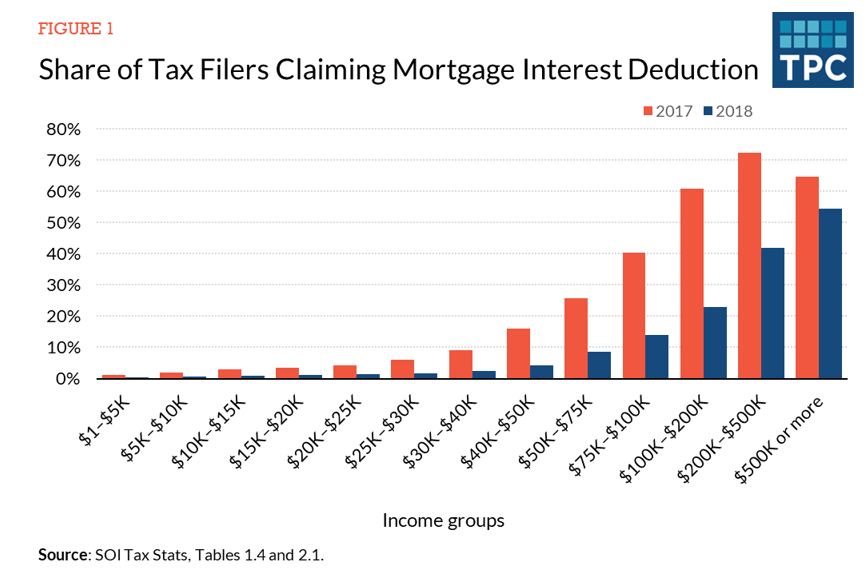 But, as our colleague Chenxi Lu points out, even with the reduced value of the subsidy, many homebuyers could still afford their mortgages by rebalancing their portfolios. Homebuyers may have other sources of funds, such as family members, for a down payment. And since the TCJA cut taxes for most taxpayers, including homebuyers, some of those tax savings could be used to pay for housing.

In our new report, we provide the first empirical estimates of how the TCJA affected mortgages and house prices. Using data from the American Community Survey, the Home Mortgage Disclosure Act, and Zillow, we analyzed how the size of new mortgages and the prices of newly sold homes changed since the TCJA took effect.

We find that the reduction in the subsidy for mortgage interest did, in fact, reduce the size of new mortgages. But we also find that the extra income from the lowered taxes offset that reduction. Combining those two factors, the overall effect was a small increase in the size of mortgages.

Think about it like this: families weren’t forced to switch from itemizing to the standard deduction. They switched because it kept more money in their pockets. And it looks like home buyers decided that some of that money, and the money from other tax cuts in the TCJA, could be used to pay for mortgage interest, overwhelming the effect of losing the subsidy.

As for home prices, we find that between 2017 and 2019 the overall change in prices is small (0.10 percent), but the effect varies by region. In the Northeast prices decreased by a quarter of a percent, and in the South and Midwest they increased by about the same amount. The Western region saw no change in prices.

We also studied changes in areas with high and low shares of households headed by a person of color. Structural racism in the United States, both historically and currently, has left many people of color with both lower average incomes to pay mortgage interest and fewer assets to facilitate down payments. Thus, changes in what appears to be a color-blind tax policy (such as the mortgage interest deduction) can actually have positive or negative effects on people of color.

Before the TCJA was passed, there was some alarm that home prices would be hurt. In our report we find that, while there is some variation, overall that alarm was misplaced. The effect on home prices from reducing the value of the mortgage interest deduction was mostly offset by disposable income from a reduction in total taxes.