Congress seems to be considering two ways to address the Tax Cut and Job Act’s $10,000 cap on the state and local tax (SALT) deduction. The House version of President Biden’s Build Back Better (BBB) bill would raise the cap to $80,000. An alternative plan,  first proposed by the Institute on Taxation and Economic Policy (ITEP), would eliminate the contentious cap entirely for those making $400,000 or less and then gradually restore the $10,000 deduction limit. Senators Bernie Sanders (I-VT) and Bob Menendez (D-NJ) are developing a proposal similar to that idea, though final details may differ.

The Tax Policy Center analyzed both the $80,000 cap and a $400,000 exemption from the deduction limit. The results: Repealing the deduction limit for all but very high income households would be less regressive than raising the cap to $80,000. Either would be less regressive than repealing the cap entirely. But all three would overwhelmingly benefit high-income tax filers and do almost nothing for middle income households.

How the numbers look

Middle-income households would get an average 2021 tax cut of about $20 from either proposal. That’s because only about 10 percent of all tax filers itemize their deductions. Each proposal would encourage a relatively small number of these households to become itemizers. But even for them, their tax savings would be small. 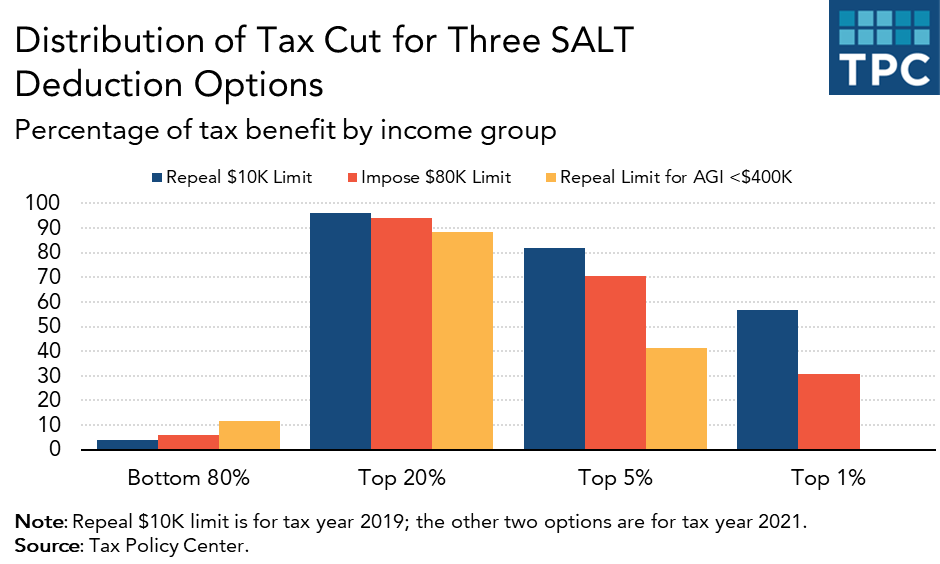 The revised SALT deduction is designed to raise revenue, at least on paper, because both plans would restore the $10,000 cap for all after 2025. Under current law, the cap would expire that year if Congress did nothing. However, compared to a permanent $10,000 SALT cap, both plans would be a huge tax cut.

However, this design could significantly raise effective marginal tax rates for about 800,000 households in the phase-in range, discouraging people from working, saving, and investing. Someone who pays $60,000 in state and local taxes and whose income increased from $400,000 to $500,000 would lose $50,000 in deductions over the phase-in range.

Helping the very rich or the merely rich

Congress could address this problem by capping the maximum SALT deduction at, say, $50,000 for people with incomes below $400,000. That still could increase marginal tax rates substantially, but by no more than 40 percent over the $100,000 phase-in range. It also would reduce the 2021 revenue cost and be slightly less regressive.

The plan Sanders, Menendez and other Senate Democrats are developing would be only a modest improvement over the House’s $80,000 SALT cap. The House plan would produce a huge windfall for the very rich. The Senate would limit its windfall to the merely rich. And neither would do much at all for middle-income households.