The House budget reconciliation deal rejected a corporate income tax rate increase in favor of a 15 percent minimum tax on book income. Though both President Biden and the House Ways and Means committee proposed a tax rate hike, conservative Democrats blocked that measure, arguing it would harm the economy. But a moderate rate hike would be less of a disincentive than the book minimum tax for large, capital-intensive corporations to invest.

About 300 companies with at least $1 billion in annual adjusted book income over three years could be subject to the book minimum tax once it becomes effective in 2023. However, these firms account for about 60 percent of capital spending, so their reaction could have a substantial impact on the economy.

Both a rate increase and the minimum book income tax would raise revenues from corporations, but their effects are quite different. Compared to the standard 21 percent corporate tax, a 15 percent tax on book income imposes a lower tax rate on a broader base.

The major difference between the two tax bases is the rate of depreciation, or cost recovery, for capital assets: For book income, a firm writes off the value of its capital assets in line with their decline in economic productivity. By contrast, current tax law allows the cost of most machinery and equipment as well as research and development (R&D) to be “expensed”, or fully deducted when incurred. (Under current law, equipment expensing under “bonus depreciation” will be phased out between 2023 and 2026.)

The standard corporate income tax subsidizes equipment and R&D investment because Congress believes they have high socioeconomic benefits. Equipment investment raises worker productivity and eventually wages, and R&D can generate knowledge that spurs innovation. Investment in structures, by comparison, has fewer positive effects and therefore does not benefit from accelerated tax depreciation.

Tax depreciation is a key component of a company’s effective marginal tax rate (EMTR), which affects its incentive to invest. The EMTR describes the income tax burden as a percentage of the pre-tax return to an investment that just breaks even after taxes. Generally, faster depreciation lowers EMTRs, and full expensing brings it to zero for an investment financed with equity. A corporate income tax with a zero EMTR taxes only excess returns to investment, or “rents,” and therefore does not distort marginal investment decisions.

To see how the 15 percent book minimum tax could affect investment, we used TPC’s investment and capital model (ICM) to calculate its impact on corporate EMTRs for equity-financed investments. For comparison, we also calculated the effect of simply raising the corporate income tax rate to 25 percent. 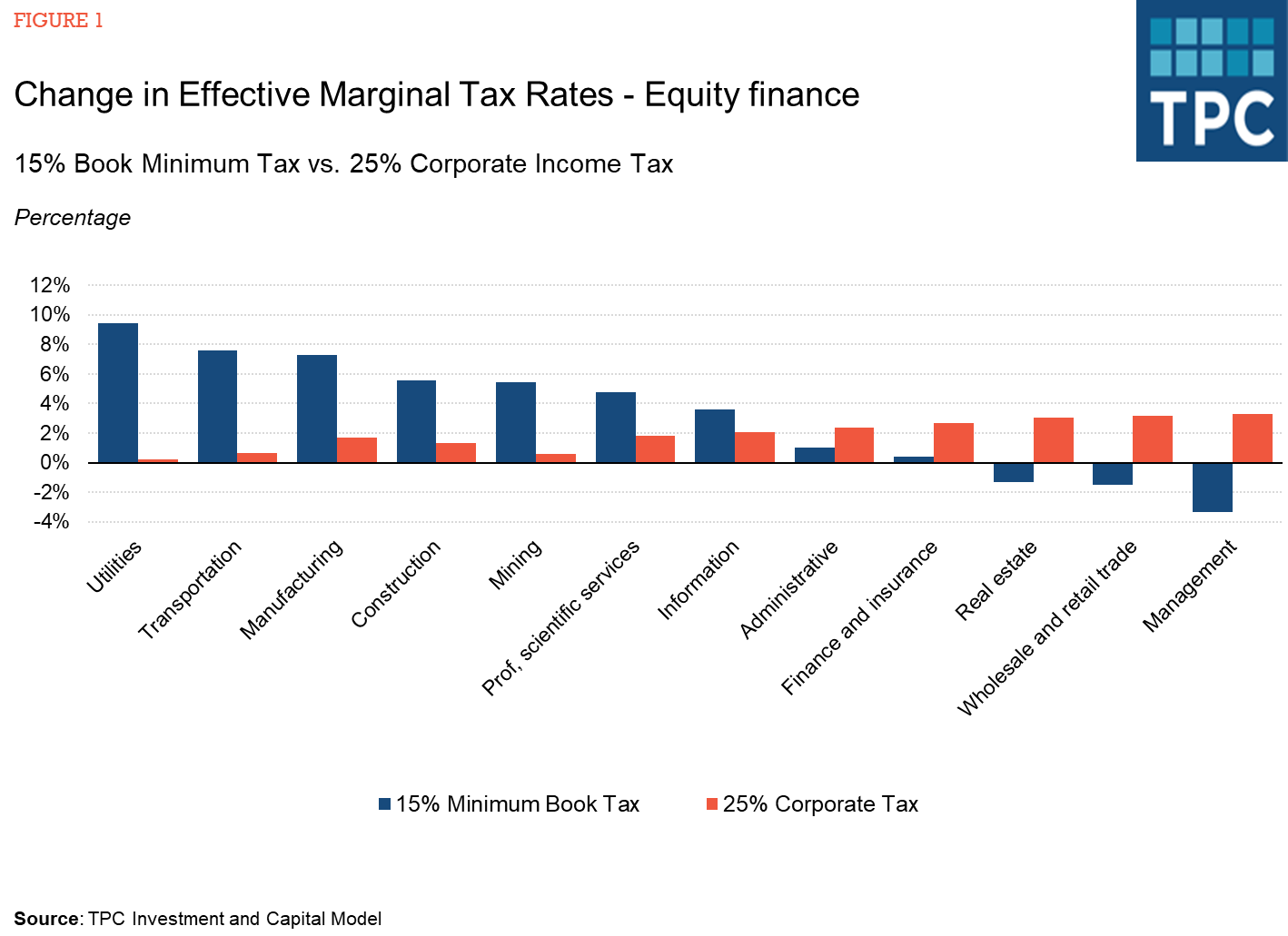 We found that under the book minimum tax, slower cost recovery outweighs the benefit of the lower book tax rate for companies that invest heavily in equipment and R&D, who experience higher EMTRs. This is most likely to be the case for utilities and transportation and manufacturing firms.

By contrast, raising the regular corporate tax rate to 25 percent would deter investment in these sectors less than the book minimum tax. However, large finance, real estate, and wholesale and retail trade businesses, which invest less in equipment and R&D, would be hit harder by a moderate corporate rate hike.

Another important difference between the book minimum tax and a rate increase is the relative effect on debt financing. Interest expense is generally deductible from both book and tax income. A lower statutory tax rate reduces the tax benefit of both interest and depreciation deductions, while a rate hike increases them. So EMTRs on debt-financed investment would rise under the book minimum tax but fall under a corporate rate increase, and this effect would be more intense for companies investing heavily in equipment and R&D. 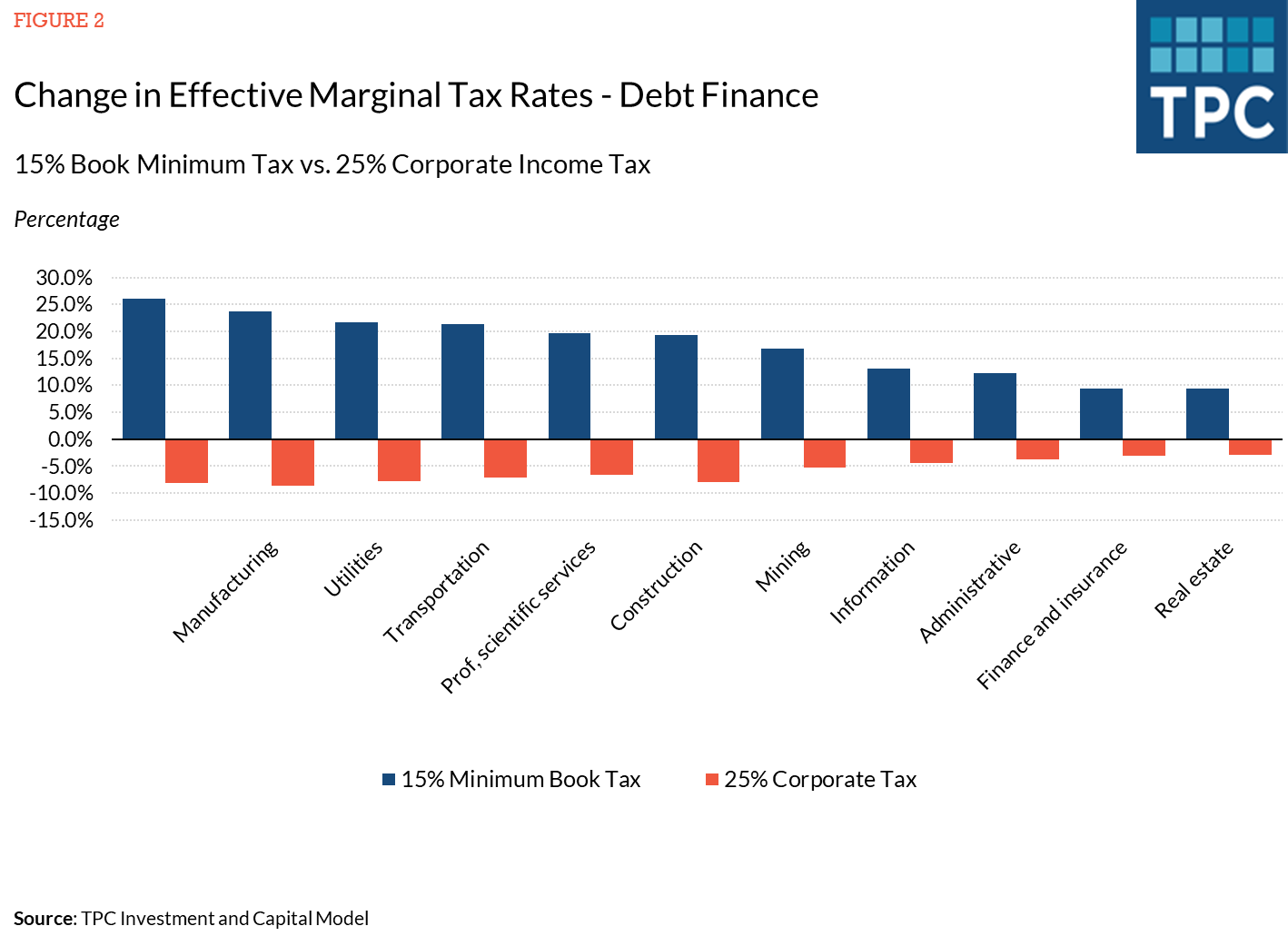 As a result, the book minimum tax may reduce debt financing by large corporations, which could help protect them in economic downturns. However, that benefit must be weighed against the minimum tax’s investment disincentives. In addition, multiple tax regimes increase uncertainty, which can also reduce investment.

The book minimum tax on big corporations appears to be politically popular, perhaps because of the many cases of corporations that report high book profits but pay little or no corporate tax. Tax avoidance—for example, by offshore profit-shifting—contributes to that issue. And President Biden’s proposed reform of the global intangible low-income tax (GILTI) addresses that problem.

Given that the corporate tax base now consists mostly of rents and that share ownership is skewed toward the wealthy, a rate hike would have been both efficient and progressive. Despite its lower headline tax rate, the book minimum tax may be more likely to undermine investment.