The Health and Economic Recovery Omnibus Emergency Solutions Act, HEROES Act, would substantially increase the earned income tax credit (EITC) for workers without children at home. Not only would this benefit these workers, often called “childless,” but Urban Institute research finds that such a change would target benefits to workers in many of the industries hit hardest by COVID-19, such as retail and hospitality.

In a recent analysis of how the EITC works during a recession, my colleague Donald Marron and I analyze options that would increase the size of the credit and expand eligibility. The HEROES Act does both for childless workers. The credit would phase in and phase out at twice its current rate and would phase in over a longer income range, boosting the maximum credit from $538 to $1,487. The HEROES Act also would expand the age ranges for eligible claimants of the childless EITC, decreasing the minimum age from 25 to 19 and increasing the maximum age from 64 to 67. Full-time students without children would still need to be 25 to claim the EITC. The credit would also phase out at higher incomes (figure 1). 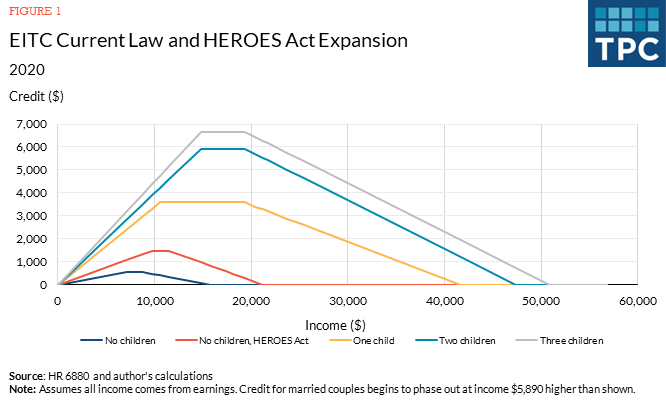 Together, these changes would provide a one-time fiscal stimulus when the credit would be paid. Benefits would be very targeted to low-income workers. The Tax Policy Center estimates that three-quarters of benefits from these HEROES Act changes to the EITC would go to people in the bottom 20 percent of the income distribution.

Moreover, these changes would help people in industries that are being hurt the most by the pandemic (table 1). My earlier work with Laura Wheaton and Kevin Werner shows how workers in each state would be affected (summarized for the United States below). 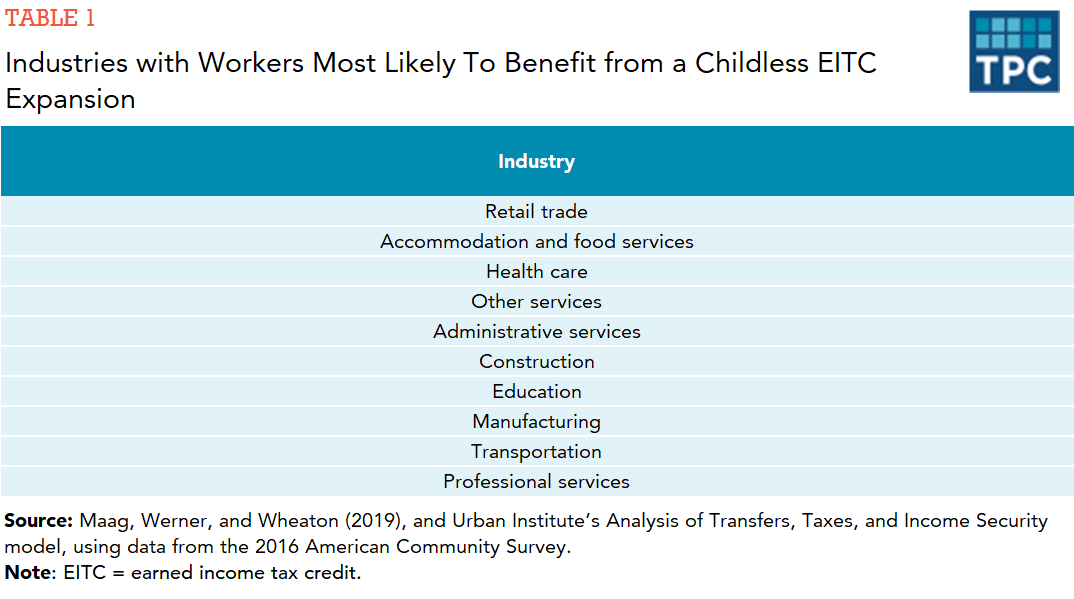 One shortcoming of the EITC as an anti-recession tool is that some people will see their credit shrink if their earnings drop. That’s the opposite of what should happen in a recession, and Congress could address this shortcoming by accelerating the credit phase-in or eliminating it entirely.

The HEROES Act takes a different approach to provide a temporary fix: It would allow people to claim their EITC for 2020 based on either their 2019 or 2020 income, whichever yields the greater credit. A similar approach has been used before to address natural disasters. This change would apply to all EITC claimants, not just childless workers.

Both these approaches could help stabilize an economy in recession by making sure a declining EITC doesn’t magnify a taxpayer’s wage losses.

A permanent expansion of the EITC for childless workers would provide more consistent economic assistance and make it easier for policymakers to deliver special payments in future recessions (much as the initial round of CARES Act rebates is doing this spring).

Several EITC expansions with at least some of these characteristics have been proposed, including the Working Families Tax Relief Act, the Cost-of-Living Refund, and the related LIFT (Livable Incomes for Families Today) the Middle Class Act. We analyze each of these proposals here.

The HEROES Act would be a good way to improve how the EITC functions during a recession, and the Act also would provide an important boost to childless workers.