I love college sports. I really do – especially basketball. (Go Wildcats!) But I also love President Obama’s FY16 budget proposal to cut federal subsidies for premium seats at college sporting events. Federal subsidies ought to provide national benefits and there’s no evidence that boosting attendance in high-priced courtside or skybox seats does that.

Let’s start with my beloved Wildcats. The University of Kentucky’s #1 ranked men’s basketball team may be the only undefeated team left in major men’s college hoops. But it’s far from the only college or university to exploit a well-known gimmick in the tax code.

Typically, whenever you make a tax deductible contribution to your favorite nonprofit or charity, you must subtract the value of any good or service you receive in return, like a coffee mug or t-shirt. Contributions in exchange for priority seating or the exclusive right to buy a ticket at college sporting events used to work the same way – until 1988 when Congress enacted a law allowing sports fans to deduct 80 percent of such contributions.

Now you might think that colleges and universities are doing nothing wrong by charging higher prices to super fans who want premium seats. And you would be right. Economists call this price discrimination and it makes a lot of sense for, say, airlines to sell first class seats at a premium.

The difference is that airlines are for-profit firms. When it comes to public or private, non-profit schools and universities, federal taxpayers are also on the hook, to the tune of $2.5 billion over 10 years according to the U.S. Treasury Department.

And benefits of the deduction are clearly upside down. Bloomberg reports that Duke charges $7,000 annually for priority seating, which creates a deduction worth $2,200 for a taxpayer in the top 39.6 percent bracket. Someone in the 10 percent bracket—if they could conceivably afford the surcharge and itemized their deductions– would get only $560. (If the taxpayer lives in North Carolina, she can also reduce her state income tax.)

College and university presidents argue that sports provide societal benefits – by attracting more and better students, or building leadership skills. But research casts doubt on these claims. And, while a winning record may boost donations to a particular school, there’s no evidence that successful athletic programs boost overall contributions to higher education.

Rather, the athletically rich schools get richer and the poor get poorer. In 2005, Division 1A athletic programs drew 82 percent of their total revenue from contributions (for tickets and other purposes) plus commercial activities (including media rights as well as ticket sales). For all other Division 1 schools, the comparable figure was 28 to 29 percent. 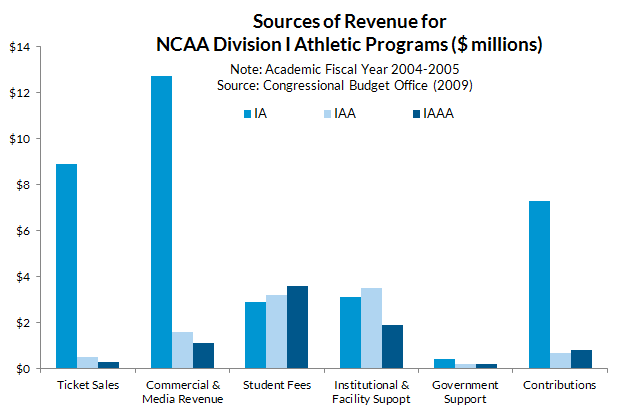 I guess I just wrote myself out of ever getting free tickets.

Full disclosure: I worked on tax and budget issues while serving as a senior economist with the Council of Economic Advisers from September 2013 to August 2014.