The US federal tax system is highly progressive, primarily because individual income tax rates rise sharply with income and refundable tax credits lead to negative income taxes for households with low income. Updated estimates from the Tax Policy Center project that effective federal tax rates this year will range from 3.5 percent for households in the lowest-income quintile (or fifth) to 33.0 percent for those in the top 1 percent. 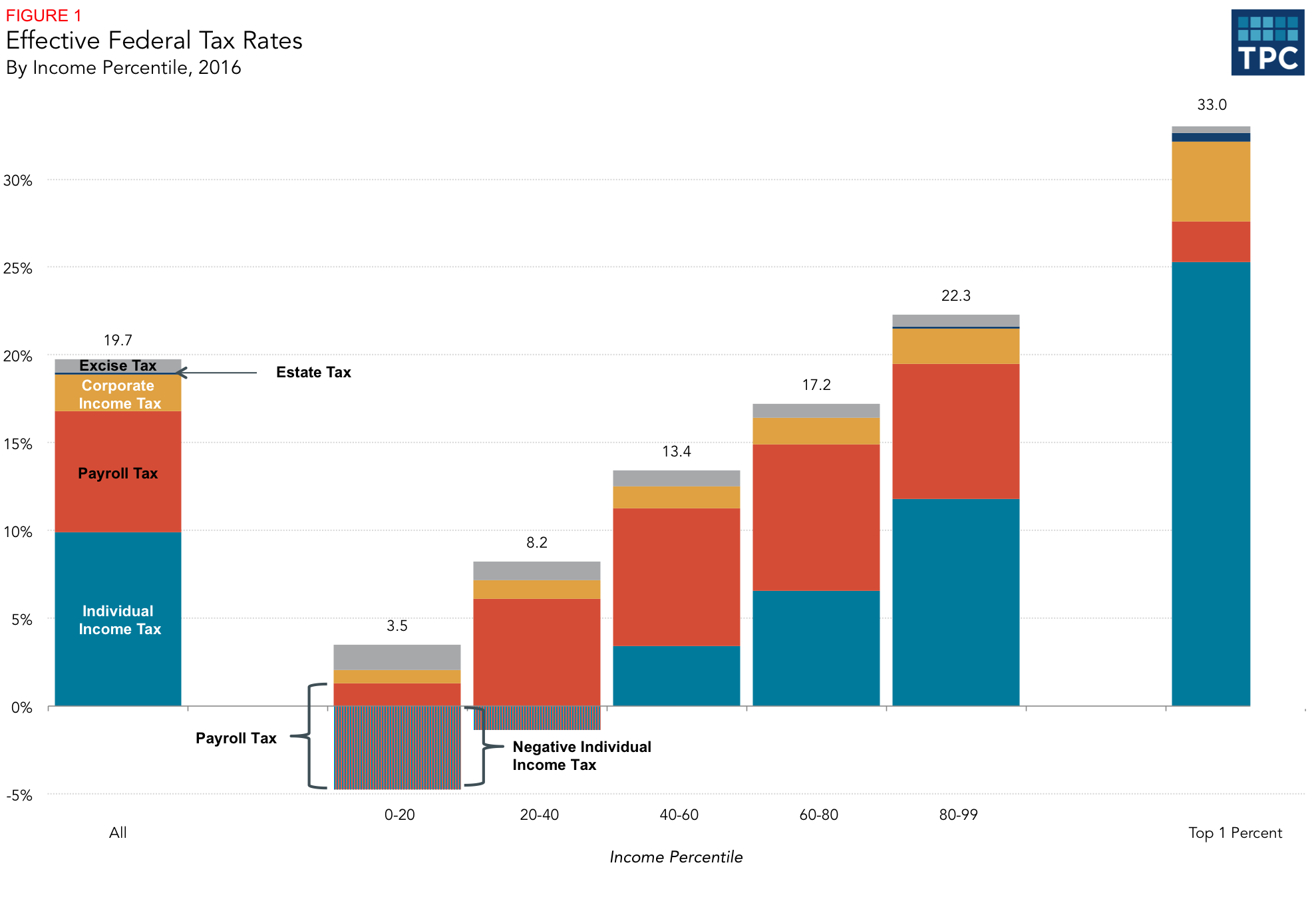 The individual income tax boosts progressivity the most with effective rates rising from -4.8 percent for the lowest quintile to 25.3 percent for the top 1 percent. Low-income households benefit from refundable tax credits that not only wipe out any positive tax liability but often result in net payments from government. Families with children particularly benefit from the child and earned income tax credits and the American Opportunity credit for higher education. Meanwhile high-income households face higher bracket rates, lose some of their itemized deductions, exemptions, and other tax benefits to phaseouts, and get hit by the Affordable Care Act’s net investment income tax. That combination results in an 11.8 percent effective individual income tax rate for those in the 80th-99th percentiles and more than double that for the top 1 percent.

Payroll taxes that support Social Security and Medicare rise from 6.1 percent of income in the lowest quintile to 8.3 percent in the fourth quintile but fall to 2.3 percent for the top 1 percent because the Social Security tax stops when income exceeds a cap—$118,500 this year. Rich folks do pay a 0.9 percent additional Medicare tax on earnings over $200,000 ($250,000 for couples filing jointly) but that comes nowhere close to matching the 6.2 percent tax they and their employers each get out of paying on income over the cap.

The corporate income tax boosts overall progressivity because it falls most heavily on the rich. The Tax Policy Center allocates a fifth of the tax to workers but the remainder falls on the owners of capital, who are disproportionately at the top of the income distribution. The top 1 percent pays an effective rate of 4.5 percent, nearly triple the 1.6 percent average paid by everyone else. Because the tax collects only about a tenth of federal revenue, however, its own progressivity has relatively little effect on the overall progressivity of federal taxes.

Similarly, estate and gift taxes are highly progressive—the estate portion falls entirely on the largest one-in-800 estates—but their tiny contribution to total revenue means they have little overall impact on the distribution of taxes.

Finally, excise taxes hit the poor much harder than the rich: because they spend more of their income, people in the bottom quintile pay, on average, 2.5 times a large a share of their income that the top quintile pays and more than 3.5 times the share paid by the top 1 percent. Again, however, the tax brings in relatively little revenue (about 3 percent of the total) so it affects overall progressivity only a little.

Denise Monsen, dressed as the Statue of Liberty, stands on a Pembroke Pines, Fla. street corner on the final day of the U.S. Income Tax filing deadline, Wednesday, April 15, 2015. Monsen has worked for the Liberty Tax Service for three years and will return to the landscape business tomorrow. (AP Photo/J Pat Carter)