Though the Senate made dozens of changes to the Tax Cuts and Jobs Act (TCJA) before passing the measure early Saturday morning, the bill’s overall effect on households changed little, according to a new analysis by the Tax Policy Center.  Similar to the version approved by the Senate Finance Committee, the final Senate bill would cut taxes by an average of about $1,200 in 2019, with most of the benefits going to the highest income households. By 2027, after nearly all of the bill’s individual income tax provision would expire, the average tax cut would shrink to less than $300 and the tax benefit would be even more highly skewed to the highest-income households.

The final Senate bill, much like the House version of the TCJA, is built around a major tax cut for corporations and a tax reduction for many pass-through businesses such as partnerships.  For individuals, it increases the standard deduction and the child credit, repeals personal exemptions, and modestly adjusts income tax rates. Unlike the House bill, it retains the alternative minimum tax. But the net effect of all those changes is relatively small, especially for low- and middle-income households. 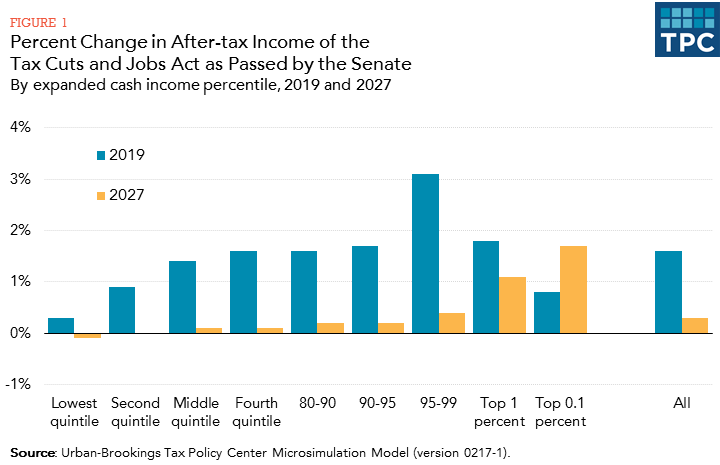 As a result, more than 60 percent of the benefits of the Senate’s TCJA would go to the highest-income 1 percent of households  (who be making $900,000+ in 2027) while nearly half of all households would be paying more in taxes than they would under current law. Low- and middle-income households would pay roughly the same amount of tax as under today’s code, while the top 1 percent would pay an average of about $27,000 less, and see their after-tax incomes rise by 1.1 percent. The top 0.1 percent, who will be making about $5 million or more, would pay an average of $182,000 less, or 1.7 percent of after-tax income, under the Senate bill.

While the House and Senate negotiators will have to work out dozens of differences between the two bills, the way they affect the average tax bills of people in different income groups is very similar. The real issue is how they treat different households whose income is the same but whose circumstance may be very different.