In testimony yesterday before a joint hearing of two House subcommittees, I urged Congress to modernize the nation’s social welfare programs to focus on early childhood, quality teachers, more effective work subsidies, and improved neighborhoods. One way lawmakers can shift their gaze is by considering the effects of combined marginal tax rates that often rise steeply as people increase their income and lose their eligibility for benefits.

While some talk about how we live  in an age of austerity, we are in fact  in a period of extraordinary opportunity. On a per-household basis, our income is higher than before the Great Recession and 60 percent higher than when Ronald Reagan was elected President in 1980.

A forward-looking social welfare budget should not   be defined by the needs of a society from decades past.  Two examples of how our priorities have shifted:   Republicans and Democrats didn’t always agree on the merits of Aid to Families with Dependent Children (AFDC) or the Earned Income Tax Credit, yet they agreed on the need to shift from welfare to wage subsidies.  Ditto for moving from public housing toward housing vouchers.

I sense that both the American public and its elected representatives are united in wanting to create a 21st century social welfare budget.  That budget, I believe, should and will place greater focus on opportunity, mobility, work, and investment in human, real, and financial capital.

However, for the most part, our focus has been elsewhere.  As I show in my recent book Dead Men Ruling, we live at a time when our elected officials are trapped by the promises of their predecessors.  New agendas mean reneging on past promises.  Even modest economic growth provides new opportunities, but the nation operates on  a budget constrained by choices made by dead and retired elected officials who continue to rule.

For instance, the  Congressional Budget Office and others project  government will  increase spending and tax subsidies by more than  $1 trillion annually by 2025, yet they already absorb more than all future additional revenues—the traditional source of flexibility in budget making.

I am concerned about the potential negative effects of these programs on work, wealth accumulation, and marriage of combined marginal tax rate imposed mainly on lower-income households.  To see how multiple programs combine to reduce the reward to work and marriage, look at this chart. 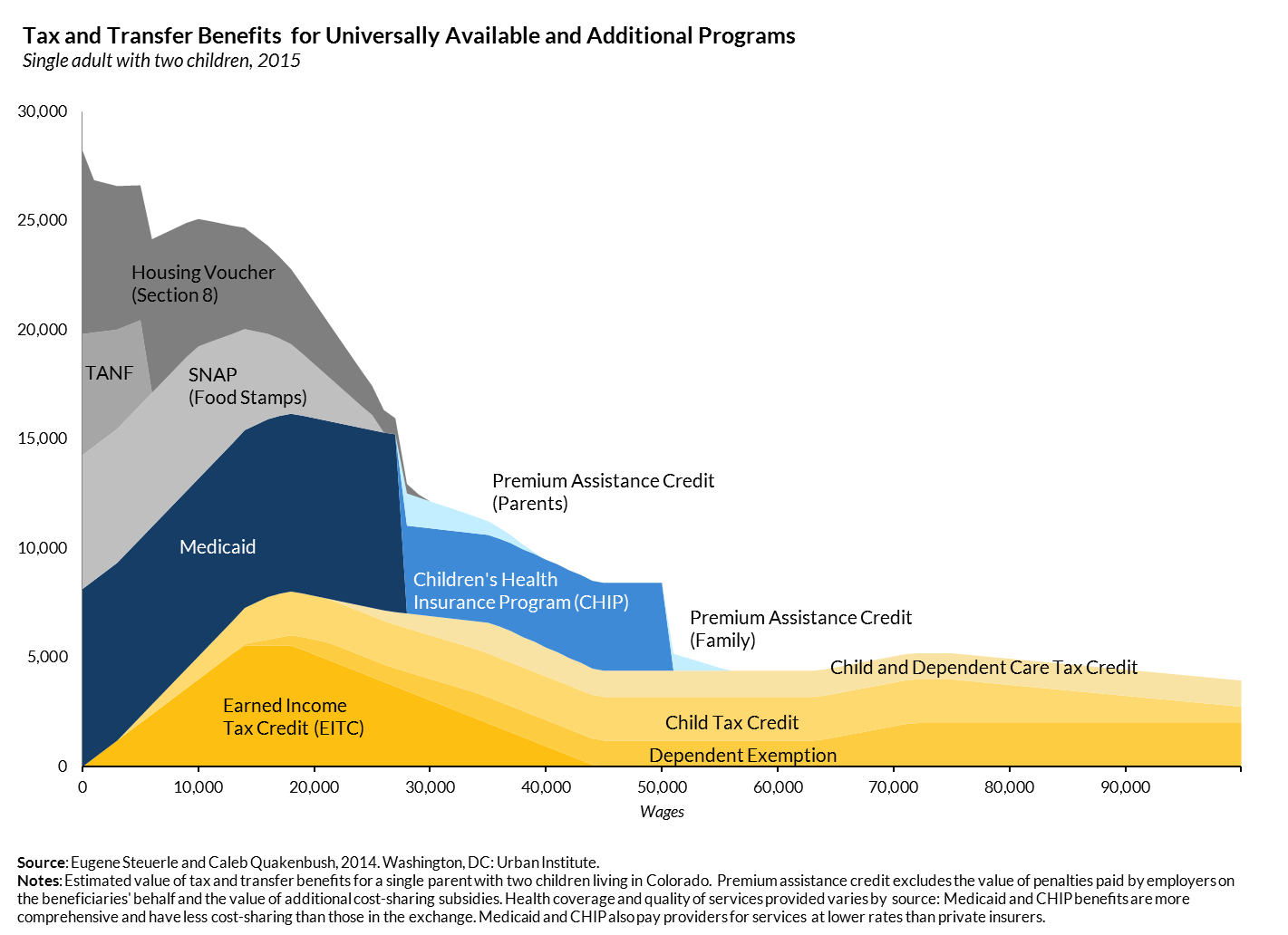 For households with children, combined marginal tax rates from direct taxes and the phasing out of benefits from universally available programs like EITC, SNAP, and government-subsidized health insurance average about 60 percent as they move from about $15,000 to $55,000 of income.  This is what happens when a head of household moves toward full-time work, takes a second job, or marries another worker.

Beneficiaries of additional housing and welfare support face marginal rates that average closer to 75 percent. Add out of pocket costs for transportation, consumption taxes, and child care, and the gains from work fall even more. Sometimes there are no gains at all.

While there is widespread disagreement on the size of these disincentive effects on work and marriage, there is little doubt that they exist. One solution: Focus future resources on increasing opportunity for young households. Make combined tax rates more explicit and make work a stronger requirement for receiving some benefits.