Michigan, out of ideas, might ask poor to pick up transportation tab

Michigan desperately needs more money for transportation. Republican Gov. Rick Snyder called the state’s roads and bridges "rotten" in his State of the State speech. Snyder and the legislature passed a gas tax hike (Michigan's rate is among the lowest in the country) late last year but needed voters to approve a ballot amendment (Proposal 1) for it to become law. On May 1, Michigan voters overwhelmingly rejected Proposal 1.

Defeated at the polls and still in need of transportation dollars, the Michigan House found an easy out: taxing the poor. On June 10 they passed a transportation bill that barely raises fuel taxes but eliminates the state’s earned income tax credit (EITC).

Gas taxes are regressive but the House bill doubles down on the problem by getting road money only from poor residents by ending the EITC, which targets benefits at working families near the poverty level. In 2013, 780,500 Michigan taxpayers claimed the state’s EITC. The average beneficiary had $17,725 in income and claimed a $140 credit (Michigan has one of the lowest state EITCs). Over four years, the House bill takes $484 million from these low-income families but asks all Michigan residents (including poor families) to contribute only $315 million in new fuel taxes. There are no other tax hikes in the package. 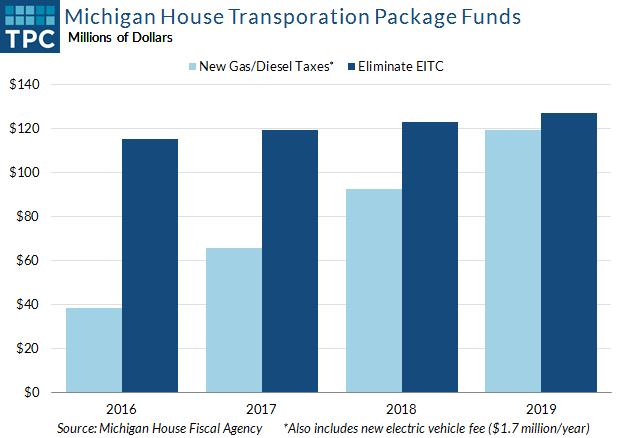 The Michigan EITC was created by a coalition of Republicans and Democrats in 2006 and the legislature now trying to kill it voted to expand it just last year. So why was eliminating the EITC used to fund a transportation bill? The answer is both complex (Michigan's tax laws) and simple (political expediency).

The original attempt at road financing, Proposal 1, was not just a gas tax hike. The package also would have exempted gas from the sales tax (to mitigate the new tax burden at the pump), raised the general sales tax rate by 1 percent to replace revenue from the exemption, and expanded the EITC to assist poor residents with the tax hikes. Michigan's constitution requires voter-approved amendments for sales tax increases, so the entire package was sent to voters—and they killed the whole thing.

The House bill avoids another referendum by transferring income tax revenue from the general fund to the transportation fund rather than raising new income tax revenue. But that requires ending some credits, and the House picked the EITC over more costly and politically sensitive income tax credits for seniors or homeowners.

Ending the EITC still does not provide enough funds for $3.4 billion transportation bill (over four years). Michigan's House Fiscal Agency warns that without tax increases Michigan would have to make Medicaid cuts to pay for the income tax transfers—again, shifting the transportation tab to the state’s poorest residents.

With the Senate still debating its own bill, a better course for Michigan is a clean gas tax hike. Admittedly, voters rejected a gas tax increase as part of Proposal 1, so make it a clean hike with no attachments—just a higher gas tax for more transportation funding. Six states have already made the same deal this year. Increasing Michigan's gas tax while keeping the general sales tax on gas means a higher tax burden but it's a shared burden that pays for shared roads and bridges. The tax increase would also maintain the dedicated source of transportation funds rather than shifting money around (and causing future budget headaches). Finally, raising the gas tax does not require a voter-approved amendment.

At the very least the Michigan House should be honest with Michigan residents. Ending the EITC and transferring revenue is not a tax-free way to improve transportation infrastructure. It’s squeezing your poorest residents for money.