Avoiding Biden’s Proposed Capital Gains Tax Hikes Won’t Be So Easy. Or Will It?

President Biden’s American Families Plan would make two big changes in the tax treatment of investment income such as long-term capital gains and dividends. Some critics say the change will raise little revenue because sophisticated wealthy investors will find ways to avoid the new tax. But while many wealthy investors may dodge the tax increase, the bulk of their gains may not.

Among all households, only the highest-income 0.3 percent would be subject to the new top tax rate. Of households with capital gains, a larger share have incomes above the $1 million threshold, but it’s still small: In 2018 less than 3 percent had an adjusted gross income (AGI) greater than $1 million.

This rate increase would give those households a strong incentive to keep their overall income below the $1 million threshold. If the new 43.4 percent rate applies to all gains, even if the AGI is only a dollar above $1 million, the incentive is very, very strong. And we know that high-income households respond to incentives.

In recent research, Joint Committee on Taxation staff economist Tim Dowd and I show that taxpayers with incomes greater than $1 million time their realizations to reduce their taxes. This figure shows how taxpayers in different income groups responded in 2012 to the drop in tax rates once assets are held for at least one year before they are sold. As soon as the rate fell, realizations sharply increased, especially for those taxpayers with at least $1 million in AGI. 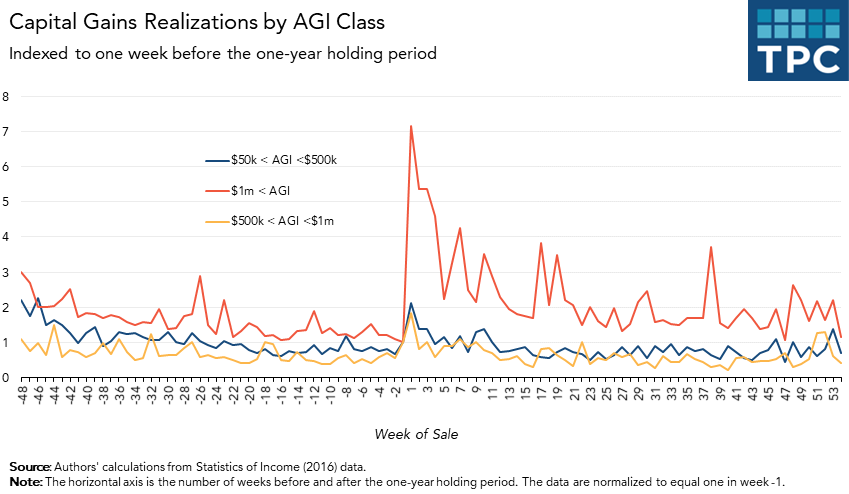 It would be relatively easy for many high-income households stay below the $1 million income threshold because they are not that far above it: In 2018 about 40 percent had incomes between $1 million and $1.5 million.

Further, a Tax Foundation report by Robert Carroll found that most households with incomes above $1 million in a given year had incomes that fluctuated over time and only occasionally reached that level. About one third were there just because they realized a large amount of capital gains. Households like that could stay under the threshold by realizing their gains over two or more years.

Many investors have unrealized gains so large that even spreading them over a few years won’t keep them below the $1 million threshold, or they have incomes above $1 million for reasons other than capital gains.

Current law does allow them to turn to the time-honored strategy of not realizing their gains and passing them tax-free to their heirs. In the past, that technique was so successful that it was possible a sharp increase in capital gains rates could raise little or no money for the federal government.

But, the second piece of the Biden plan anticipates this. It would tax at death unrealized capital gains that exceed $1 million. In other words, assets passed to heirs would be treated as though they’ve been sold, and gains in excess of $1 million would be taxed at 43.4 percent rate. This removes much of the benefit from delaying realizations. In a sense, taxing all unrealized gains above $1 million at death lowers the current $11.7 million estate tax exemption. One way or another, more estates would be taxed.

Still, only a very small share of estates would owe any taxes. Using the 2019 Survey of Consumer Finances, I calculated that only about 3 percent of households had unrealized capital gains of $1 million or more. And since many of these households will undoubtedly sell assets to support their retirement, an even smaller share will have unrealized gains of $1 million or more after the head of household has passed away.

For the super-rich, smart advisors and attorneys will look for ways their clients can avoid the new capital gains taxes as they have looked for ways to reduce estate taxes. But carefully writing the new law will help to limit the effectiveness of these strategies, so the details are going to matter. A lot.

Ultimately, if this new approach is successful, many wealthy taxpayers will probably escape paying higher taxes, but most of their gains probably will not.