IRS - What It Does and How to Reform It

This year, Congress will consider what may be the biggest tax bill in decades. This is one of a series of briefs the Tax Policy Center has prepared to help people follow the debate. Each focuses on a key tax policy issue that Congress and the Trump Administration may address.

The Internal Revenue Service (IRS) in the Treasury Department administers the federal tax laws enacted by Congress. The IRS Commissioner is appointed by the president for a term of five years and must be confirmed by the Senate. All other IRS employees, with the exception of the chief counsel, are career civil servants.

More than 40 percent of the agency’s $11.4 billion budget in 2015 went to enforcement activities (figure 1). About 85 percent of the enforcement budget was for examinations of taxpayer returns (popularly known as “audits”) and collection activities. The remainder was spent on criminal investigations and regulatory activities including monitoring tax-exempt organizations and qualified retirement plans. 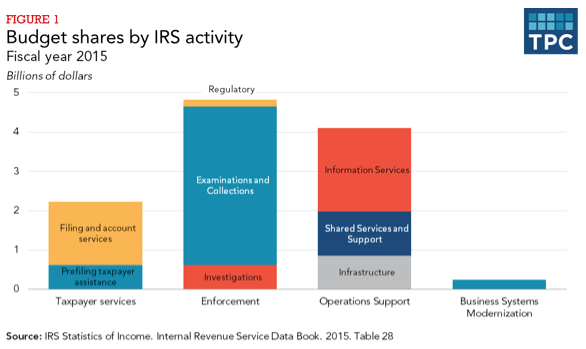 A little over a third of the budget funded operations support, and another 20 percent supported taxpayer services, including pre-filing taxpayer assistance and education, and filing and account services. Finally, another 2 percent went to business systems modernization for upgrading of information technology services. 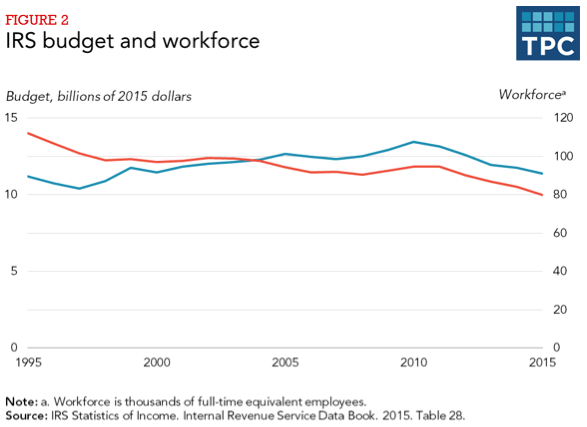 Some technological changes have aided enforcement and reduced costs of administering the tax system. Widespread electronic filing means the IRS needs fewer employees to process returns. Computerized document matching of information returns has made it easier for the IRS to detect certain errors and easier for taxpayers to compute their taxable income.

Overall, however, the reduction in IRS resources has occurred at the same time as the agency’s workload has grown. With the taxpayer population increasing, the agency must process more returns, administer more deposits and refunds, and expend more resources to keep taxpayers compliant. As the tax law has become more complex, it is more difficult for the IRS to verify the accuracy of returns.
Changes in the economy and society have created other challenges for tax enforcement and compliance. The globalization of corporate activity has expanded the potential for complex tax avoidance transactions, some of which may cross the line between legal avoidance and evasion. The increase in the share of business income taxed through partnerships and other pass-through entities requires the IRS to expend more resources checking the tax filings of business owners and the accuracy of the business income they report. Changes in family structure have made it harder to determine whether taxpayers are entitled to tax benefits based on household living arrangements, family relationships, and support tests.

A major source of increased workload has been the ongoing expansion of the IRS’s role as social program administrator. The IRS today manages a wide range of benefits designed to assist low-income families and families with children, including the earned income tax credit, the child credit, the child and dependent care credit, the low-income housing credit, and tax subsidies for higher education.

Over the years, some members of Congress have voiced concerns about high error rates in claims of refundable credits, such as the earned income tax credit. Complex eligibility rules make these programs a major source of taxpayer error. The agency also has had to address significant problems with identify theft and refund fraud.

The IRS has also suffered from politically-motivated attacks that have burdened staff and weakened the morale of agency employees. In part, these attacks reflect public unhappiness with the tax code itself, which the IRS did not create but is responsible for enforcing.

Another major change in recent years is the growing role of a vast private sector infrastructure that helps administer the tax system, including paid preparers, tax software firms, professional associations, and voluntary tax preparation services for low-income taxpayers. Today, over 90 percent of individual income tax payers use either paid preparers or software to prepare and file their returns. The growth of these services has substantially reduced costs and, for the most part, improved the accuracy of tax preparation. However, they have also made it easier for Congress to make the tax code more complicated.

The IRS is a complex and unwieldy bureaucracy that cannot be easily transformed into a modern 21st century high-tech organization. Several measures, however, could improve tax administration. Congress could enact legislation to simplify the tax law, based on suggestions from the National Taxpayer Advocate and a number of reform commissions. Congress could restore adequate funding, reversing the sharp budget cuts of recent years. Additional enforcement resources would more than pay for themselves in increased revenue collections.

Improved government-wide rules allowing more flexibility in personnel management could help restore a workforce that has eroded in recent years as baby boomers have retired and rigid rules have hampered the government’s ability to hire, promote, and retain ambitious and talented people and remove non-performers. The agency also needs to improve information technology, which would be facilitated by exempting top IT personnel from strict pay ceilings.