In 2021, Congress enacted sweeping legislation that temporarily cut child poverty nearly in half. A key feature was the expanded child tax credit (CTC), which lifted 5.3 million people out of poverty including 2.9 million children. Since the credit returned to its pre-2021 rules, child poverty bounced back up, and families struggled again to make ends meet.

Democrats failed to include the more generous benefits in the 2022 Inflation Reduction Act. Now, advocates are pressing Congress to include restoration of the enhanced CTC in any tax bill that comes up during a post-election session. They want to include a return to three key features of the 2021 expanded CTC: full refundability, higher credit amounts, and a monthly payment option.

Besides reducing poverty, those monthly payments of the CTC from July to December also helped smooth income during 2021. Multiple surveys showed subsequent drops in food insecurity and decreased reliance on credit cards and high-risk financial services.

But, a new analysis shows these benefits of the enhanced CTC were short-lived. By July 2022, six months after the monthly payments expired, 60 percent of parents with incomes below $75,000 who had previously received the monthly CTC reported now having difficulty meeting regular expenses.

In 2021, Congress increased the maximum CTC from up to $2,000 per child under 17 to up to $3,000 for those ages 6 through 17 and $3,600 for each child under age 6. Nine in ten families that received the CTC took the monthly payments. Importantly, for the first time, most very low-income children received the maximum benefit, thanks to the provision that allowed for full refundability. 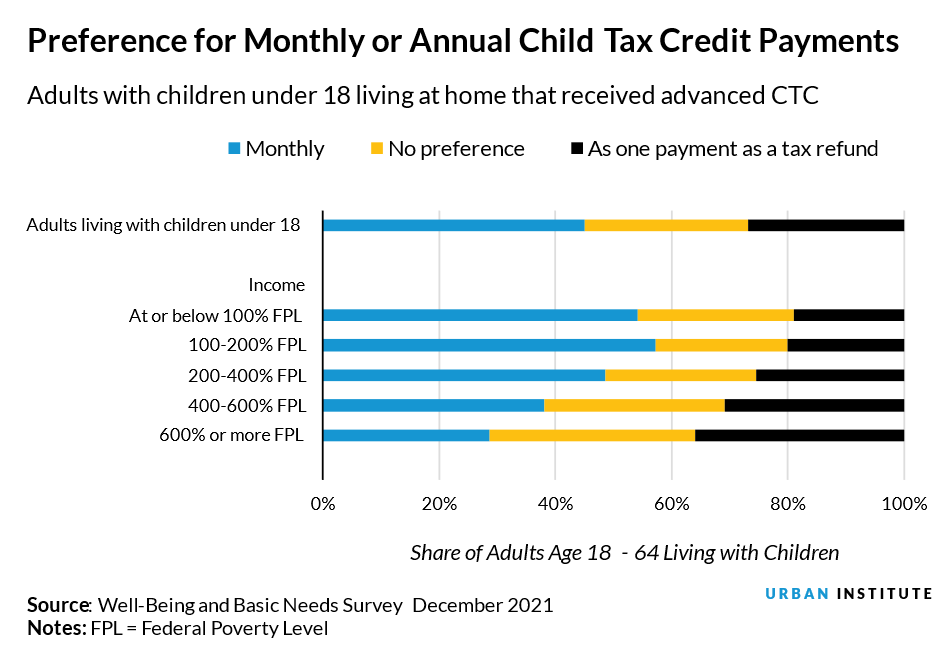 Parents reported they most commonly used the CTC payments to buy food, followed by purchasing clothing and paying for utilities. Policymakers should be proud of that result. Food insecurity is a stubborn problem that harms children. And it was a particular problem during the pandemic.  It’s correlated with reduced cognitive development and worse health, among other negative effects.

Increasing credits for the very lowest income families and delivering the payments monthly both helped reduce food insecurity. And data from the Urban Institute’s Well-Being and Basic Needs Survey showed a majority of lower income parents liked the monthly option (see figure). A majority of low- and moderate-income Hispanic and Black parents reported in another survey that the monthly payments made them feel like the government cared about their family’s health and well-being.

With mounting inflation and new evidence that parents are struggling without the monthly benefits, Congress could preserve some of the benefits of the 2021 CTC by restoring full refundability, higher credit amounts, and delivering the credit monthly. Doing so would keep child poverty at historic lows and give parents the option to receive regular payments to meet ongoing needs.