Who Would Benefit From A Tax Cut on Partnerships And Other Pass-Throughs?

Cutting tax rates on pass-through businesses to 15 percent appears to be a core element of President Trump’s tax agenda. However, new estimates from the Tax Policy Center show that such a proposal could add as much as $2 trillion to the debt over the next 10 years, while distributing nearly all the benefits to the highest income households.

While pass-throughs such as partnerships and sole proprietorships are often described as small businesses and their owners characterized as middle-class, TPC found that low- and middle-income households would receive only a small fraction of the benefits of tax cut on pass-throughs.

TPC looked at several illustrative variations of a tax rate cut on pass-throughs. First, it analyzed a 15 percent rate applied to a broad definition of pass-through income (all net income including both active and passive income and all profits). That example is similar to the idea President Trump proposed during the campaign, though his plan differed in some key respects and left out important details.

Then, TPC looked at the effects of applying the 15 percent rate to a narrower definition of income, loosely based on the one used by former House Ways & Means Committee chair Dave Camp in his 2014 tax reform plan. It includes all profits from the active income of S corporations and 30 percent of active income from other pass-throughs such as partnerships and sole proprietorships.

Next, TPC analyzed the effects of a 25 percent rate, the rate used in last June’s House Republican leadership plan. Once again, it looked at both the broad and narrow definitions of income. Finally, it looked at what would happen with and without rules to limit the ability of taxpayers to recharacterize their relatively high-tax wages as profits, which would enjoy the lower pass-through rates.

A couple of other key assumptions: TPC worked from the House GOP leadership’s proposed tax rates on ordinary income—12-25-33 percent--and assumed repeal of the Alternative Minimum Tax. It treated the pass-through rate like a cap. Thus, at the 15 percent pass-through rate, people in the 12 percent tax bracket would still pay 12 percent on their business income. Finally, the modelers assumed there would be only one level of tax on pass-throughs, as there is today, not a second tax on distributions to their owners. 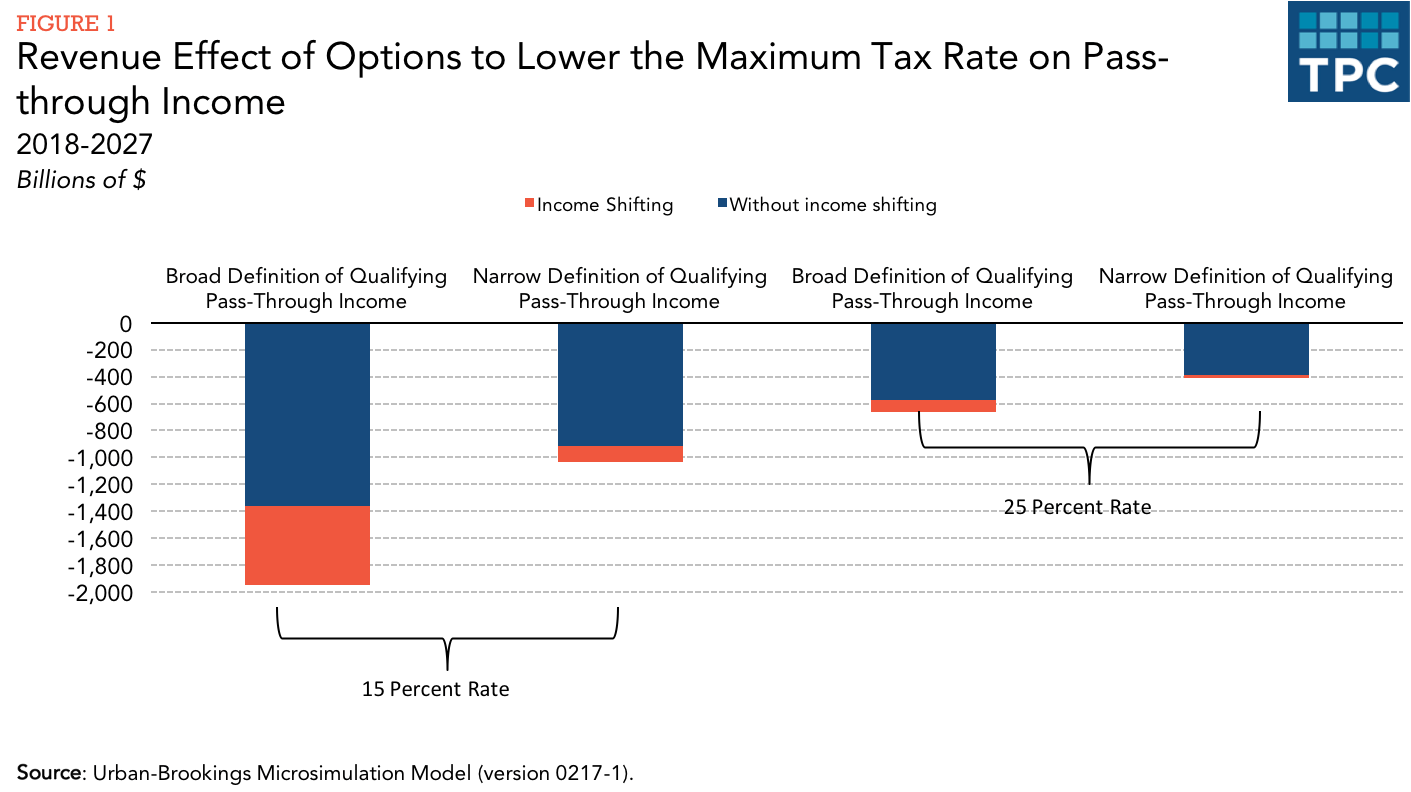 With the broad income definition, three-quarters of the benefit would go to highest-income one percent of households, who make $700,000 or more. They’d get an average tax cut of about $76,000, or 4.8 percent of their after-tax income

By contrast, fewer than five percent of middle-income households would get a tax cut, averaging $370. 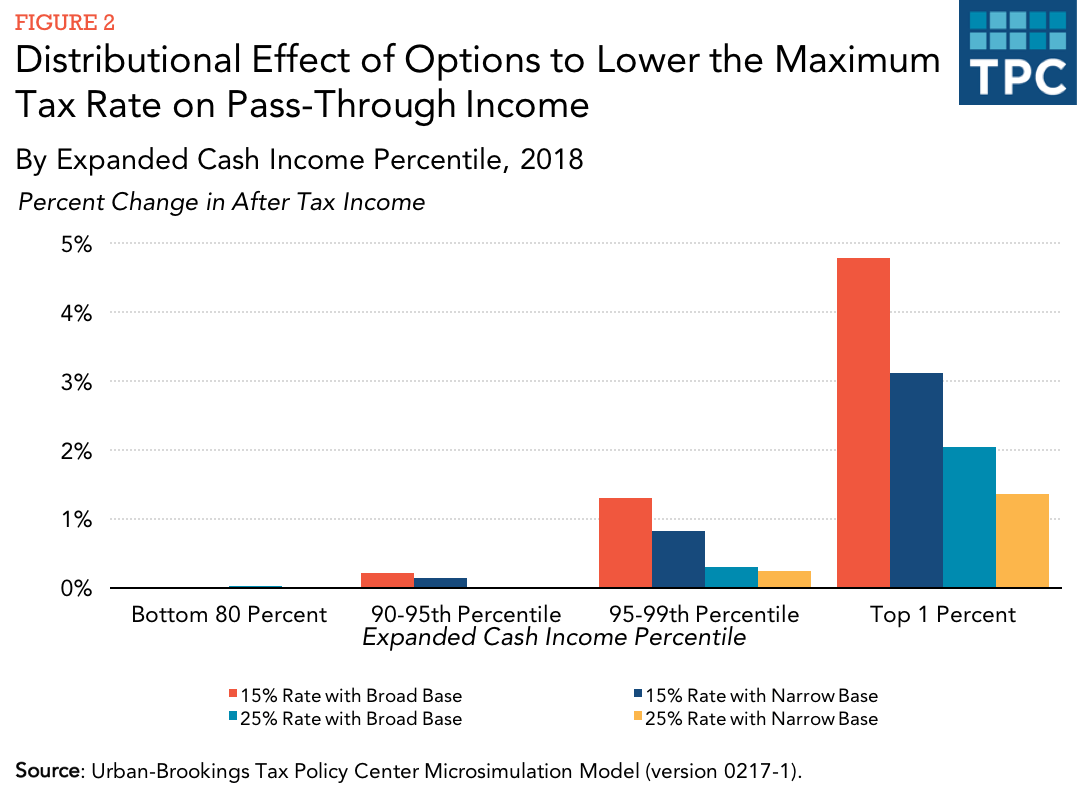 There are a couple of reasons why the benefits are so skewed to upper-income households. First, nearly two-thirds of those with pass-through income are already in the 15 percent bracket or below. Thus, they wouldn’t benefit at all from cutting the pass-through rate to 15 percent. They are already there.

Second, while most pass-through filers are low- or middle-income people, most pass-through income is made by a relative handful of business owners. They may be doctors, lawyers, partners in investment firms, or even owners of large non-publicly traded businesses. TPC estimates that this year, nearly 90 percent of pass-through income will go to the top 20 percent of households and half to the top one percent.  And the benefits of the rate cuts follow the money.

What if Congress set the pass-through rate at 25 percent on that broad income base instead of 15 percent? It would give no benefit to those in the House GOP’s 12 percent or 25 percent brackets, but would cut taxes on those pass-through owners who’d otherwise pay at the 33 percent rate. Thus, the higher rate would shrink the overall size of the tax cut and benefit fewer people, but skew the benefits even more to the highest earners.

TPC estimates that a 25 percent rate on a broad income base would reduce revenue by between roughly $570 billion and $665 billion over 10 years, depending on the amount of income shifting that occurs. If the 25 percent rate is applied to the narrow income base, the revenue loss would be roughly $400 billion.

If the 25 percent rate is applied to the broad base, about 3.8 percent of households would get a tax cut, averaging about $7,300. But nearly 90 percent of the benefits would go to those in the top 1 percent. Their average tax cut of $32,500 would be less than half of what they’d get under the 15 percent rate.

While we don’t know any details of President Trump’s plan to cut taxes on pass-throughs, we do know this: A special tax rate of 15 percent on pass-through businesses could lose as much as $2 trillion in revenue over 10 years, and nearly all the benefit would go to the highest-income households.

In this Tuesday, May 6, 2014, file photo, a vehicle moves past a sign outside Fiat Chrysler Automobiles world headquarters in Auburn Hills, Mich. (AP Photo/Carlos Osorio, File)