Which presidents spend the most? You might be surprised. 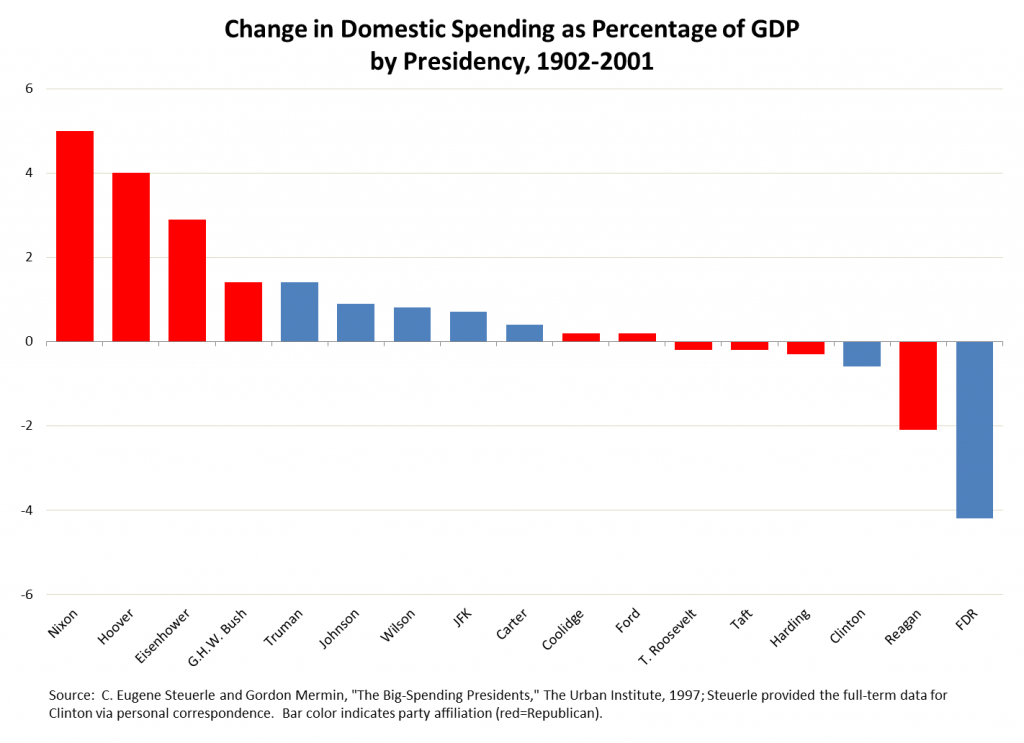 Part of the election debate is about who can be trusted to tame the debt.  Both candidates promise to be fiscally responsible and both provide maddeningly little detail on exactly how they would accomplish that.  They argue, with some reason, that election season is not the time to get into the hard choices that the nation must confront.

There is historical evidence on the spending proclivities of the two parties, and it might surprise you. My former Urban Institute and Tax Policy Center colleague Gene Steuerle has put together a fascinating time series of spending change by presidency, measured as a share of GDP.  The chart above shows the data for domestic spending–that is, excluding defense and interest on the debt. Through the Clinton years, the top four presidents are Richard Nixon, Herbert Hoover, Dwight Eisenhower, and George H.W. Bush–all Republicans.

The most fiscally responsible president by this metric is a surprise: Franklin Delano Roosevelt.  Here is Gene’s explanation:

[T]he liberal New Dealer, Franklin D. Roosevelt, is at the bottom of the list. Domestic spending actually fell by 3.6 percentage points of GDP during his tenure. How can this be? The massive World War II defense build-up crowded out domestic spending. … Perhaps more importantly, FDR’s New Deal programs were primarily short-run or counter-cyclical in nature, and focused on unemployment compensation and jobs. Much of the spending was not intended to be permanent [and disappeared when the economy recovered from the Great Depression] … Non-cyclical programs, such as retirement and health, remained quite small. Even at the end of the Truman administration, domestic spending was 1.6 percentage points lower than it had been when FDR took office two decades earlier. Finally, much of the increase in domestic spending in response to the Depression occurred prior to Roosevelt’s presidency, under Hoover.

Gene also gave me data for George W. Bush and Barack Obama, whose spending records are complicated by the response to the Great Recession.  From beginning to end of President Bush’s term, spending increased by 5.6 percent of GDP. which would give him the all-time lead if included in the chart.  But even if we stopped the clock at the end of fiscal year 2007, before the recession hit, he increased domestic spending by 0.7 percent of GDP.

Through FY2011, President Obama actually cut domestic spending slightly from the very high levels at the end of the Bush administration, and spending has been cut further since then.  Given the slowness of economic recovery, that was probably a mistake, but it certainly suggests that the image some paint of the President as a fiscal profligate is not entirely deserved. 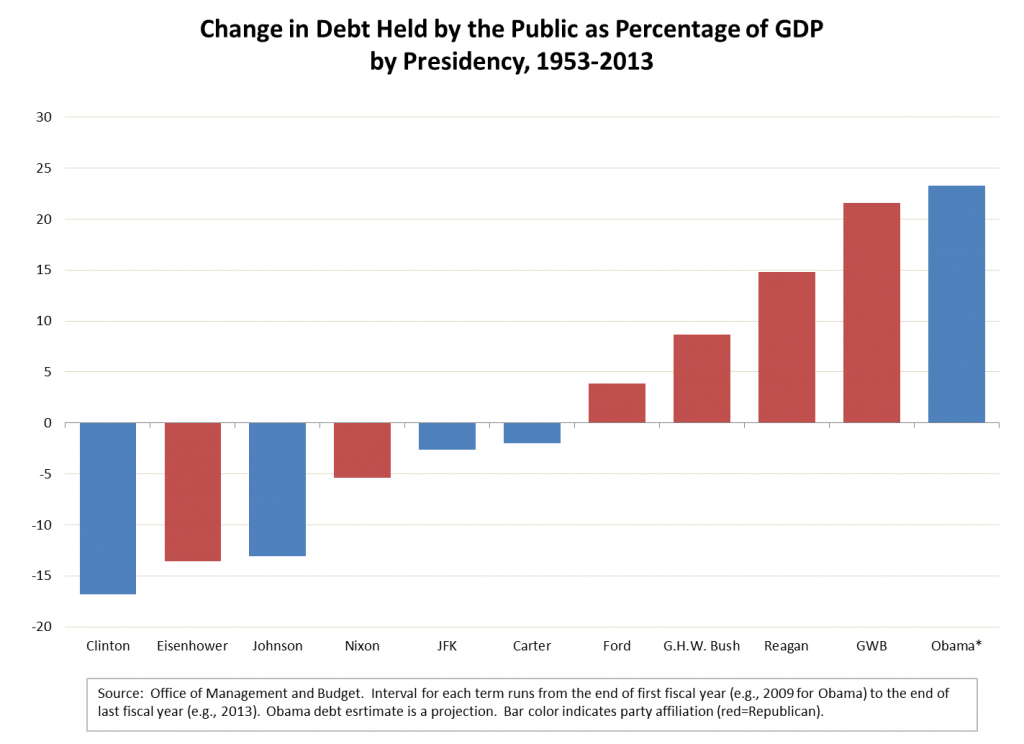 Of course, the effect on the debt depends also on defense, tax revenues, and interest. The chart above shows the debt record of presidents since Eisenhower.  (I exclude FDR, who borrowed heavily to finance World War II, and Truman, who benefited from an enormous peace dividend, because they are both outliers by a wide margin.)  Four of the five biggest borrowers were Republicans.  Ronald Reagan more than made up for his domestic spending cuts with large tax cuts, a defense build-up, and large interest payments on the debt (because interest rates were very high).  President Obama wins biggest debtor honors, by a small margin over his predecessor, because of the combination of large outlays to fight the recession and tax revenues at the lowest level since the Truman Administration.

Of course, presidents don't have full control over spending or deficits.  The economy obviously plays a big role, and actual legislation come from Congress, not the White House.  Nonetheless, the data suggest that, rhetoric notwithstanding, it may be hard to predict who will be a big spender and who will be a fiscal hawk.