Rick Perry is reportedly going to announce his tax reform plan, a so-called flat tax. There are, as far as I know, no details about the rate or exemption level of the tax or whether it will allow deductions for things like charitable contributions or mortgage interest.  So I can’t comment on the specific proposal, but I can try to dispel some misconceptions about the flat tax.

What is the flat tax? The flat tax is a VAT, not so different from the taxes popular around the world. Under one variant of VAT, called a “subtraction-method VAT,” businesses deduct the cost of inputs from gross receipts and pay tax on the difference—the value added. It is basically a sales tax where the tax is collected in stages from each producer on the supply chain rather than all at once from retailers (as in the retail sales taxes that are common in the US). A flat tax adds one more wrinkle:  businesses are allowed a deduction for wages paid, but the employees pay the “flat tax” on their wages directly. If that’s all that happened, the tax burden would be identical to the VAT (assuming the same level of compliance), but the flat tax also allows an exemption for every worker.  Wages are only taxed above that exemption level, typically set at around the poverty level, so that wages up to the poverty threshold are exempt from tax. 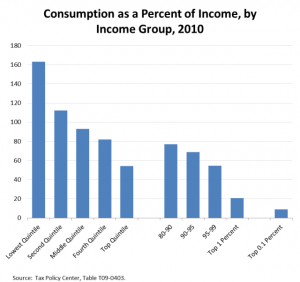 How would a flat tax affect low- and middle-income households? A flat tax would be much more regressive than the current income tax. For one thing, it’s unlikely to include the refundable tax credits (like the EITC and child credit) that augment the earnings of low earners. It’s not impossible to add refundable credits, but I’ve never seen them in a flat tax proposal. As a result, poor people will pay a larger share of their income than they do at present. Middle-income people will also pay more.

Moreover, spending falls as a share of income as income rises. Low-income people spend all their income or more.  High-income people spend only a tiny fraction.  (See chart.) A VAT or flat tax inevitably exempts most of the income of high-income people from tax. If it is going to raise the same amount of revenue as the current system, it must raise somebody else’s taxes.  That would be low- and middle-income people.

I am implicitly assuming that a VAT or flat tax would translate into higher prices--i.e., consumers would bear the brunt. Eric Toder, Jim Nunns, and Joe Rosenberg of the TPC argue that the burden should instead be allocated to labor and capital. I think the right answer lies in between, but however you slice it, the tax would be pretty regressive.

Of course, Rick Perry has expressed “dismay” at the low tax burdens on lower-income people. The flat tax is a perfect way to fix that.

Other countries have national VATs. Why would this be a big deal? VATs in Europe and the rest of the world supplement national income and payroll taxes. Often the flat tax is proposed as a complete replacement. Nobody has done that to my knowledge.

Huh? Flat taxes are widespread in Eastern Europe and Russia. Yes, so-called “flat taxes” are common on Eastern Europe and Russia, but they’re flat rate income taxes. They include capital income, such as interest, dividends, rents, and royalties in the base as well as wage income. Because high-income taxpayers receive most of the capital income, this makes those flat taxes more progressive than the flat tax periodically proposed in the US. (For example, it was the centerpiece of Steve Forbes’s presidential bid. Forbes just endorsed Perry.)

Wouldn’t a flat tax be super simple? A really comprehensive flat tax would be simpler than our current system because there would be no deductions or credits, and only the one exemption.  But our income tax would also be much, much simpler under those circumstances.  It’s true that calculating tax when there’s only one rate is simpler than calculating tax when there are multiple rates, but most people look up their tax in a table or use software or a paid preparer so the value of this simplification is also pretty negligible.  Since capital income (interest, dividends, etc.) would be exempt from tax, that would simplify reporting and recordkeeping for most taxpayers.  Overall, a flat tax would be somewhat simpler than a similarly comprehensive income tax. But the same pressures that make the current tax system riddled with deductions and credits would apply to the flat tax. It is not clear that it could stay pristine.

Could the flat tax be made more progressive? Yes. There’s a variant of the flat tax, called the X-tax, which has a progressive rate schedule and can be much more progressive than a single-rate tax. This tax was invented by the late Princeton economist David Bradford, who favored moving to a consumption tax base but worried about the regressivity of a flat tax or VAT. In theory, at least, it would be possible to match the progressivity of the current income tax by including a refundable tax credit like the EITC and steeply progressive tax rates. However, top tax rates would have to be very very high. (See the chart above.)

If you’re interested in a more positive take on the flat tax, look at the Flat Tax page on the Hoover Institution website. It includes an update of Hall and Rabushka’s book available in pdf format.

An earlier version of this post was on my Forbes blog, The Impertinent Economist.