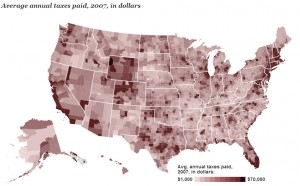 The US Income Tax Burden, County by County

Income taxes comprise a substantial fraction of the country's revenue stream. In recent years, around 45 percent of federal revenue was derived from income taxes, with federal income tax revenue amounting to about 7 percent of GDP. Income tax burdens vary for a host of reasons, including family demographic characteristics, level and composition of income, and deductions and tax benefits claimed. Since these characteristics vary by geographic location, it is natural to see variation in income tax burdens across localities.

Several caveats to the data are worth noting. One, the data only include those families who filed income tax returns. Thus, families who did not file returns are not counted in the average tax burdens. Two, in 2007 many low- and middle-income families could receive a stimulus-based rebate, but only if they filed an income tax form. This induced some families who would not have filled income taxes to submit a tax return in order to receive the rebate. Lastly, to protect the confidentiality of taxpayers, the Statistics of Income division at the Internal Revenue Service has omitted information from some counties; data on these counties is not publicly available. 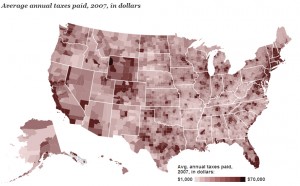