The Trump Administration claims its budget would sharply reduce the deficit by 2030 and eliminate it altogether by 2035, thanks in part to substantial new tax revenues driven by persistently strong economic growth. But under more realistic economic assumptions, federal revenues over the next decade would fall more than $3 trillion short of President Trump’s forecast. If the economy grows at the even-slower pace projected by the Congressional Budget Office (CBO), revenues would come in nearly $4 trillion lower from 2021-2030.

In the budget he proposed this week, Trump projected his fiscal plan would reduce the federal deficit from about $1 trillion to $260 billion by 2030. But Trump’s fiscal forecast is based largely on his administration’s projection of 2.9 percent real (inflation-adjusted) annual economic growth over the next decade, an assumption roughly 50 percent higher than the roughly 2 percent consensus of private and other government forecasters.

My TPC colleague Ben Page re-estimated the administration’s revenue forecast using 2 percent real growth in Gross Domestic Product rather than Trump’s 2.9 percent. And the results are striking. In 2030, Treasury would collect about $5.785 trillion in revenues, assuming 2 percent economic growth. In that year alone, that’s nearly $600 billion less revenue than the Office of Management and Budget (OMB) projects. The cumulative revenue shortfall would top $3 trillion over the 10-year budget window. 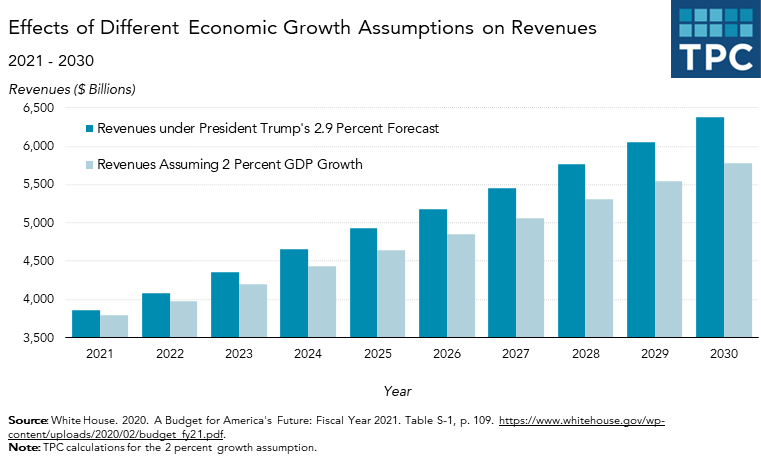 Ben calculated the change in revenues only. Slower growth would also have important effects on spending. For example, lower-than-expected revenue means more borrowing and significantly higher interest payments on the national debt. Safety net spending for programs such as Food Stamps (SNAP) or Medicaid would increase faster than the White House projects if the economy grows more slowly (even with Trump’s proposed cuts in these programs).

At the same time, spending for Social Security benefits would be somewhat lower than OMB forecasts since overall wage income would grow more slowly in a weaker economy.

Still, big revenue shortfalls likely would undermine the president’s hoped-for deficit reduction. OMB projects a 2030 deficit of 0.7 percent of GDP. The Committee for a Responsible Federal Budget estimates a 2030 deficit of 3.7 percent of GDP, assuming CBO’s economic forecast. That’s down from this year’s 4.9 percent, but far from the president’s goal.

The lesson, of course, is that assumptions matter—a lot. Using optimistic economic assumptions to make future budgets look better is nothing new. After all, President Reagan’s famous Rosy Scenario will be celebrating her 40th birthday next year. And Republicans accused President Obama of overly-optimistic projections as well. But the gap between Trump’s forecast and CBO’s is much greater than usual and exceeds even Reagan’s.

In 1981, Reagan’s OMB predicted the economy would grow at a 4.2 percent pace in 1982. CBO thought it would grow by 2.5 percent. It turned out that both were far off-target: the economy contracted in 1982 by nearly 2 percent.

We won’t know for many years who is closer to right this time: Trump or nearly all independent economists. But given the slow growth in the US labor force (the Labor Department projects growth of only 0.5 percent through 2028) and few reasons to expect a new burst of productivity, it is hard to see how the economy can grow by nearly 3 percent year-after-year with no interruption--for a decade.