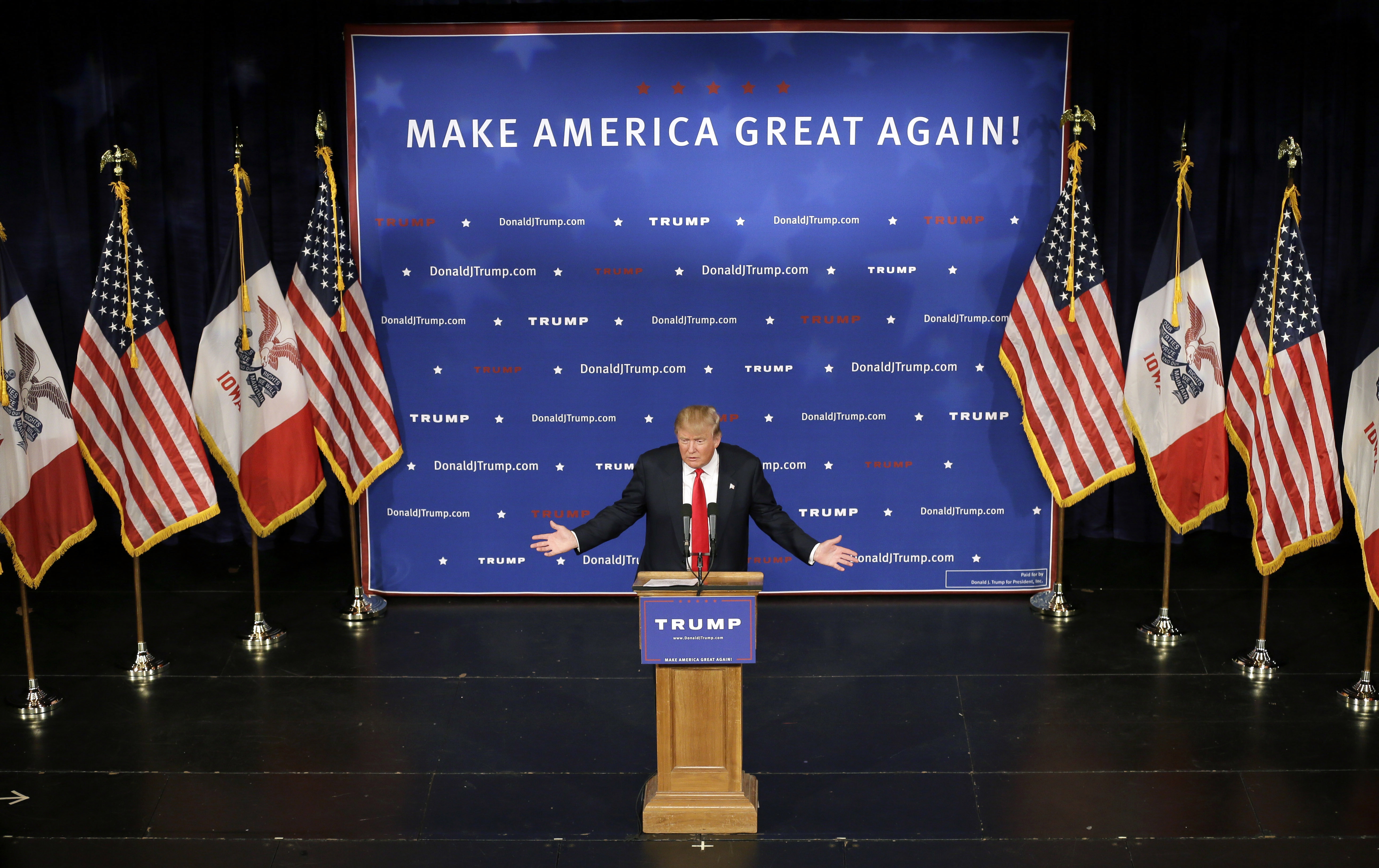 Trump Would Slash Taxes for the Top 0.1 Percent By An Average of $1.3 Million, Add Nearly $10 Trillion to the Debt

Donald Trump’s tax plan would add $9.5 trillion to the national debt from 2016 to 2026 and another $15 trillion in the following decade (before added interest), according to a new analysis by the Tax Policy Center. Nearly all households would get a tax cut under the plan, averaging about $5,100 in 2017. However, the benefits would be overwhelmingly skewed to the highest-income taxpayers, with those in the top 0.1 percent (who make $3.7 million or more) getting an average tax cut of more than $1.3 million.

Trump has said he’d pay higher taxes under this plan. Because the GOP presidential hopeful has not released his income tax returns, we don’t know how the proposal would affect him personally. However, it would boost after-tax incomes for those in his income class by nearly 20 percent.

By contrast, the lowest-income households would receive a tax cut of about $130, about one percent of their after-tax income, and middle income households would get an average tax cut of $2,700, or about five percent of their after-tax income. Overall, one-third of the benefits of Trump’s tax cuts would go to those in the top 1 percent (who make $737,000 or more), according to TPC. 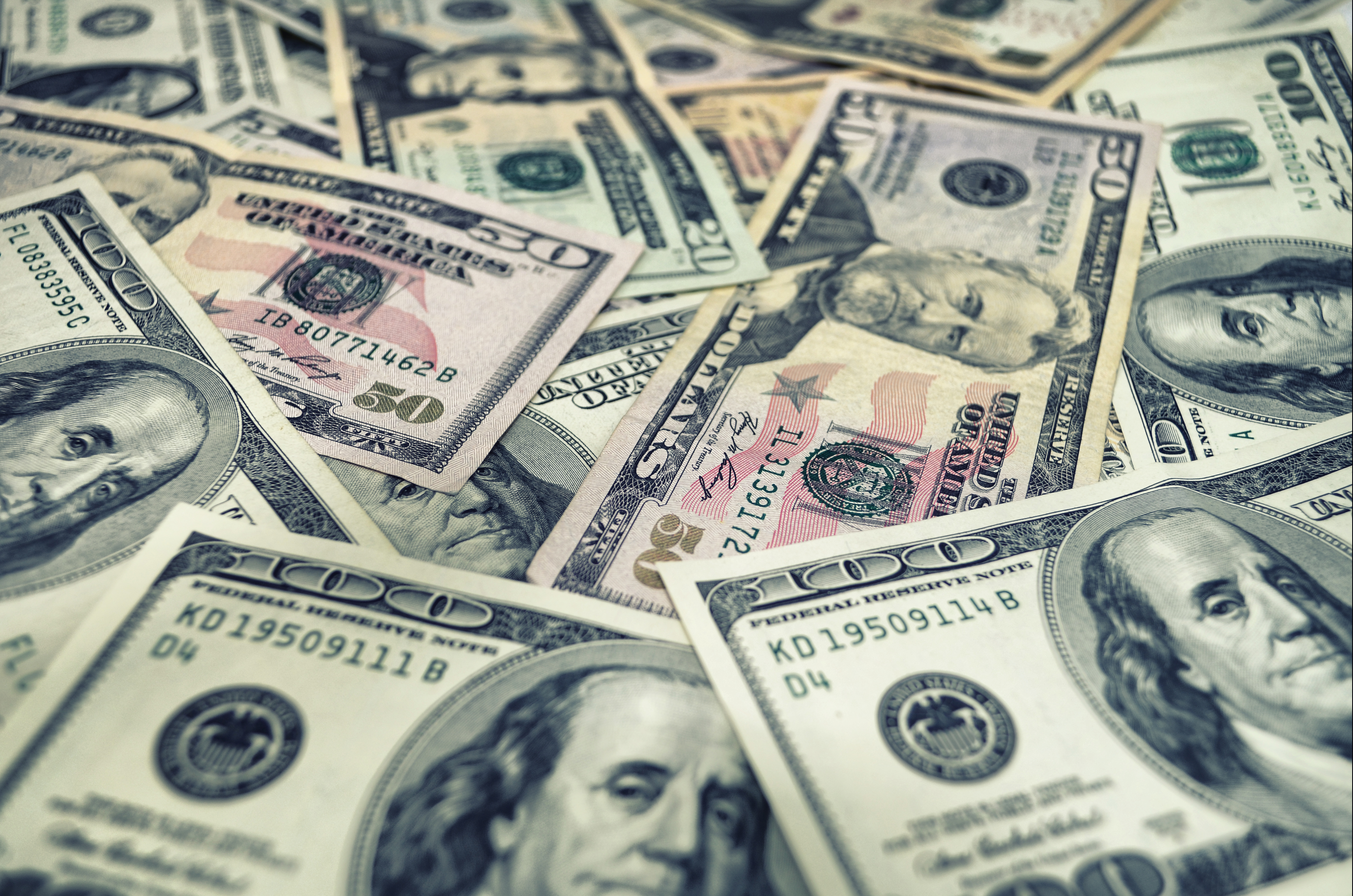 When he introduced his plan, Trump promised it would raise the same amount of money as the current tax code. He’s also said he would “insist” on a balanced budget. However, TPC found that Trump’s plan would raise the federal deficit and national debt by amounts that far exceed any tax cut in history.

In 2017, it would add $545 billion to the deficit and more than double the projected annual budget shortfall. Over the next decade, his tax plan would add more than $9.5 trillion to the national debt, excluding added interest costs. In 2025 alone, it would increase the annual deficit by $1.1 trillion. To prevent his plan from adding to the deficit that year, Congress would need to cut all projected non-interest spending by one-fifth. 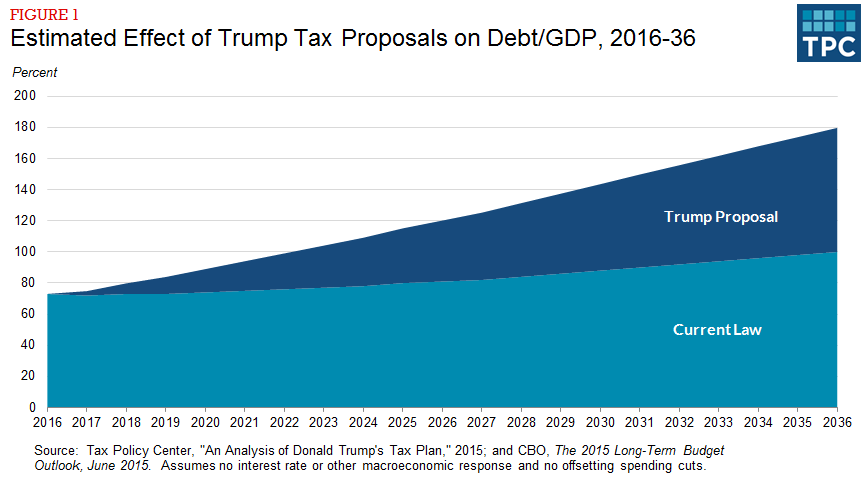 To meet this goal by cutting only discretionary programs, Congress would have to eliminate 80 percent of all defense and non-entitlement domestic spending. Alternatively, it could offset a tax cut of this magnitude by cutting Medicare and Social Security by 40 percent.

TPC’s analysis assumes that people and firms change behavior in response to tax changes, but does not attempt to calculate macroeconomic effects (dynamic scoring). Trump claims his tax cuts would lead to a substantial increase in the economy, and thus pay for themselves.

His plan includes provisions aimed at reducing the cost of capital and increasing after-tax returns to savers. These measures could boost the overall economy by increasing savings and investment. However, unless Trump’s enormous tax cuts are somehow offset with very large spending reductions, they’d substantially increase the national debt and drive up interest rates, thus neutralizing their economic benefits. So far, Trump has not described what spending he’d cut to pay for his tax plan.

Trump would collapse the current seven individual tax rates (with a top rate of 39.6 percent) to three brackets, 25-20-10. He’d repeal the Alternative Minimum Tax and the estate tax. He’d maintain the current personal exemption, but nearly quadruple the standard deduction from today’s $12,600 to $50,000  for married couples and from $6,300 to $25,000 for singles. Investors would pay a 20 percent rate on capital gains, in contrast to today’s top rate of 23.8 percent (including the Affordable Care Act’s 3.8 percent surtax).

Trump also said he’d cap the value of itemized deductions, though he did not say how.

Trump would cut the tax rate on business income to 15 percent. Importantly, this rate would apply to all businesses, including both C corporations and pass-through firms such as partnerships, sole proprietorships, and S corporations.

He’d repeal the corporate AMT and eliminate most business tax preferences. U.S.-based multinational corporations would be taxed on foreign profits in the year they are earned, and lose the ability to defer tax on that income. Firms would be subject to a 10 percent tax (payable over 10 years) on existing unrepatriated foreign earnings.

Trump’s plan would result in major changes in the way people and firms file returns. For example, TPC estimates that nearly 90 percent of those who currently itemize would take the new standard deduction. At the same time, without strict rules to stop them, many high-income individuals would likely restructure their compensation from wages (which Trump would tax at a top rate of 25 percent) to business income (which he’d tax at 15 percent).

While Trump would eliminate the ability of hedge fund operators to categorize their income as “carried interest,” these investment managers would likely pay less tax on their compensation than they do today, since they’d be able to pay at a 15 percent rate, rather than the current 23.8 percent capital gains rate.

Trump did not specify many details of his plan. TPC asked his staff to clarify key specifics, but received no response. As a result, TPC made its own assumptions about important details (for a list of questions TPC asked the Trump campaign and the assumptions it made, click here). In most cases, TPC’s assumptions limited the revenue loss of his plan.

Even without knowing those precise details, the basic story is clear: Trump’s plan promises massive tax cuts that are heavily skewed to the highest-income households. And it would blow a hole of historic proportions in the national debt.

The Tax Policy Center provides independent, non-partisan analysis of the tax proposals of candidates for public office. We describe our approach here.