While testing TPC’s cool election tax calculator, I was surprised to see that some high-income singles could pay more income taxes under Donald Trump’s plan than under Hillary Clinton’s. In general, Trump would cut taxes dramatically while Clinton would raise taxes for those with very high incomes while targeting middle-income tax cuts to families with young children.  But the single, childless person with $129,000 or $420,000 in income—the top 1 or 0.1 percent , respectively, for singles—would pay a couple hundred bucks more under Trump’s plan than under Clinton’s or under current law.

There are two reasons.  First, Trump’s 33 percent top rate kicks in at a fairly low income level for singles—$127,500 in 2017 for someone with itemized deductions equal to 10 percent of AGI. Some people in Trump’s 33 percent bracket are in the 28 percent bracket today..  Second, Trump eliminates personal exemptions—worth $4,100 for a single tax filer in 2017.  He’d raise the standard deduction significantly—from $6,400 to $15,150 for singles—but our hypothetical taxpayers would itemize deductions.

In addition, while Clinton would boost capital gains tax rates markedly on very high-income filers, some people would face higher gains tax rates under Trump’s plan. The 20-percent long-term capital gains rate takes effect with the top 33 percent rate, which kicks in at lower income than under current law or under Clinton’s plan. 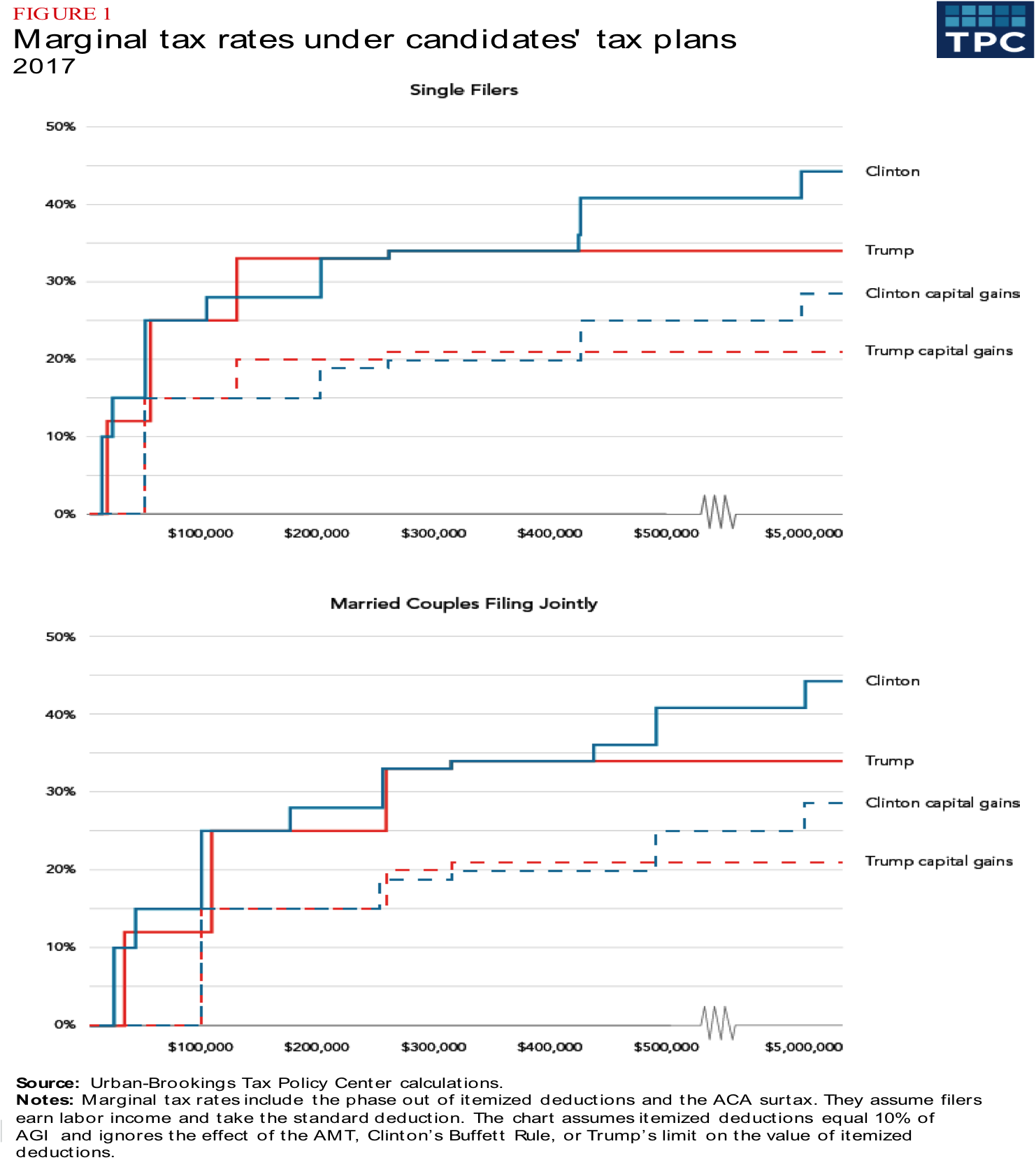 Take a look at these two charts. They show effective marginal tax rates on ordinary income and long-term capital gains for singles and for married couples with no children. They assume that itemized deductions are 10 percent of AGI for those who don’t take the standard deduction. The chart includes not only the statutory rates, but also the effects of the itemized deduction phaseout for high-income filers (Pease), the Affordable Care Act surtaxes, and Clinton’s 4 percent surtax on income over $5 million.  It doesn’t reflect the effect of the AMT (which Trump would repeal), Clinton’s Buffett Rule, or Trump’s cap on itemized deductions.

Clinton is in blue and Trump is red.  You can see that while taxes under Clinton are often higher than under Trump, there are ranges of income where Trump’s tax rates are higher.

There are lots of other complexities that are reflected in the calculator. Try it, both for the pre-packaged scenarios and for ones you design yourself.  It will help you understand the key features affecting individuals in each proposal.

But you better do it quick.  In a week, one of these plans is going to be irrelevant!