The earned income tax credit (EITC) is a highly effective policy for fighting poverty that has garnered widespread praise from both Democrats and Republicans. In recent years, policymakers and advocates have proposed new ideas to expand and reform both the federal EITC and its state-level counterparts.

Given the interest and investment in the EITC, the Tax Policy Center has created a new EITC Interactive Database that makes it easy to access information about the EITC and to tailor that data for specific geographic and political communities. The database replaces a version previously maintained by the Brookings Institution.

The interactive tool provides key aggregated tax return data for EITC recipients and other low-income households including the number and characteristics of filers and the aggregate size of their benefits. Users can search the database by state, ZIP code, city, county, metropolitan area, state legislative district, and congressional district. 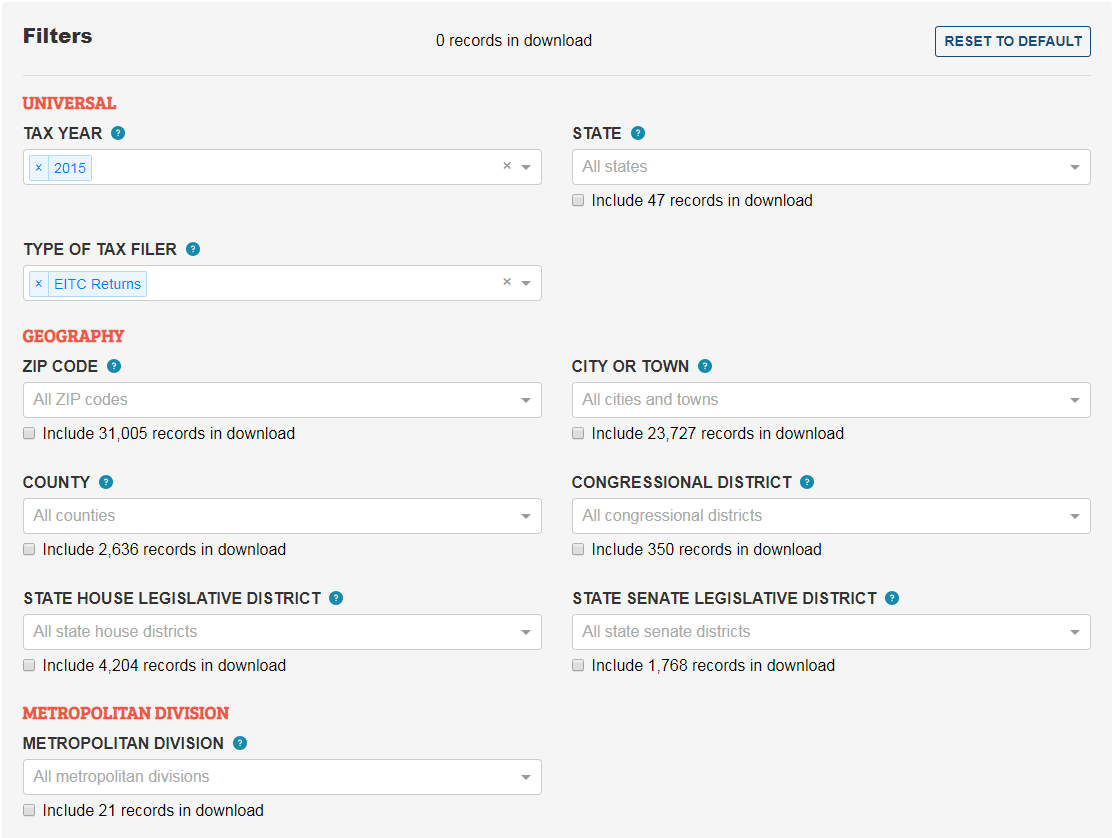 The data come from the Internal Revenue Service's Stakeholder Partnerships, Education and Communication (IRS-SPEC) Return Information Database, compiled by the IRS Wage and Investment Division’s Research Unit. The IRS-SPEC data are organized by ZIP code and limited to tax returns with adjusted gross income under $60,000. The Tax Policy Center distributes the data across the other geographies using a program developed by the Missouri Census Data Center (for more on the methodology, please see the tool’s About page).

Here’s how it works: Say you’re interested in how many households claimed the EITC and the total amount of benefits paid in Atlanta, Georgia. By clicking through the drop-down menus, you can find that data for various geographic and political communities (and with it calculate the average benefit for each). You can preview your data on the page and then download it to a CSV file. 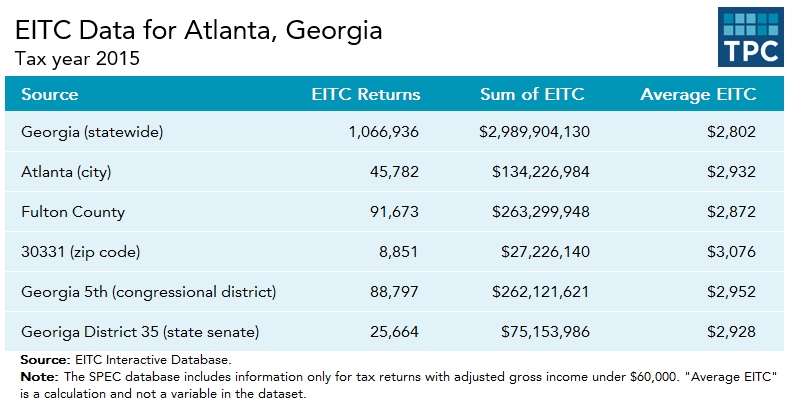 Your search will also produce data for numerous other variables relevant for anyone interested in filers claiming the EITC. For example, among filers in Fulton County claiming the EITC (total, 91,673): 88,880 returns received a tax refund; 1,874 returns were prepared at a volunteer organization site; 56,462 returns had a head of household filing status; 6,171 returns received education credits; and 3,490 returns included taxable pension income. The About page details the full list of variables in the database.

The default search is returns claiming an EITC but you can also search for eight other types of tax filers, such as adults older than age 60 (33,592 returns in Fulton County) and returns prepared at a Volunteer Income Tax Assistance site (4,716 returns in Fulton County). All filing types come from the same dataset and thus are limited to returns with an AGI under $60,000.

The tool also lets you download information about the characteristics of the EITC-eligible population from an Urban Institute analysis of survey data.

The wealth of information from the EITC Interactive Database should be useful to policymakers, advocates, researchers, journalists, and anyone curious about this important tax credit.