A Plan To Radically Expand the Earned Income Tax Credit

Lawmakers of both parties have been talking about restructuring the refundable tax credits, such as the earned income tax credit and the child tax credit, that benefit low- and moderate-income households. But two Democratic lawmakers are leading the way to fundamentally restructure the EITC, shifting it from a program primarily aimed at helping low-income working families with children to a wage subsidy for even middle-income workers.

Representative Ro Khanna (D-CA) and Senator Sherrod Brown would radically increase the EITC for low- and middle-income workers with the Grow American Income  Now (GAIN) Act. Their idea: Use an expanded credit to make up for slow wage growth experienced by workers over the last generation. The Tax Policy Center estimates the  proposal would add $1.4 trillion to the EITC’s cost over the 10-year budget window from FY2017 – FY2026.

Today’s EITC provides almost $70 billion in benefits annually, with 97 percent going to workers with children at home. The GAIN Act would roughly double benefits for those households while increasing benefits as much as six-fold for workers without children living at home (“childless workers” in tax parlance).  Maximum benefits would jump from just over $500 to $3,000 – almost on par with what workers with one child can receive today (see figure). 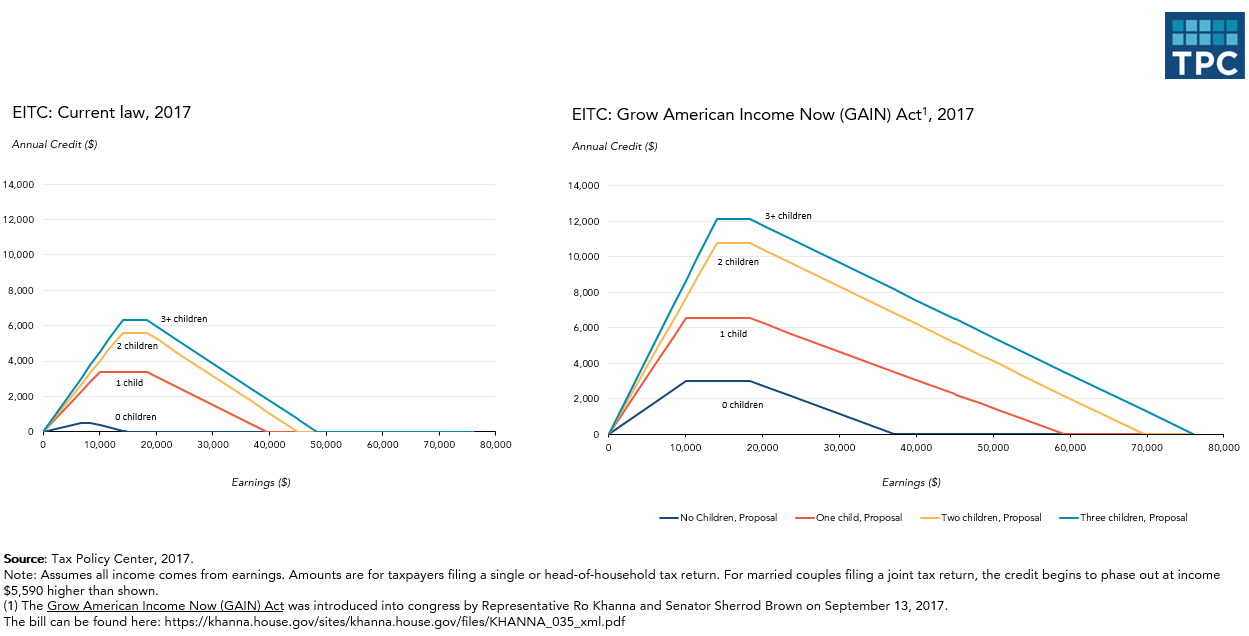 Perhaps even more important, childless workers would be eligible for the credit until their income reaches just over $37,100 ($42,700 if married). That’s more than twice as high as today’s EITC and approaches the phase-out level for workers with one child (almost $40,000). It would exceed the $35,000 median income level for non-family households.

With this change, childless workers would no longer be the lone group of taxpayers taxed into poverty, rather than lifted out of poverty with tax credits.

The childless credit would also be available to workers as young as 21, down from today’s 25. There is currently no minimum age for workers with children.

The Tax Policy Center analyzed this proposal and several variations. For example, by keeping the eligibility age of 25 level for the childless EITC, the proposal would cost about $100 billion less over 10 years.

The proposal is much more expansive than recent proposals by former President Obama and House Speaker Paul Ryan (R-WI). However, both parties have put the idea of reforming the EITC on the table.

For now, at a cost $1.4 trillion, Khanna’s and Brown’s plan is little more than wishful thinking. But it could become a catalyst for a larger push to increase the EITC – a tax program that provides substantial benefits to low- and middle-income workers.