TPC Updates Its Analysis: Biden Would Raise Taxes by $2.1 Trillion, Nearly All On Business and High-Income Households

Democratic presidential candidate Joe Biden’s current campaign plan would raise taxes by $2.41 trillion over the next decade, about 0.98 percent of Gross Domestic Product (GDP), according to an updated analysis by the Tax Policy Center. The burden of nearly all those tax increases would fall on high-income households. In 2022, on average, all but the highest-income 20 percent would get a tax cut under Biden’s plan, while the top 1 percent—those making about $790,000 or more—would see substantial reductions in their after-tax incomes. 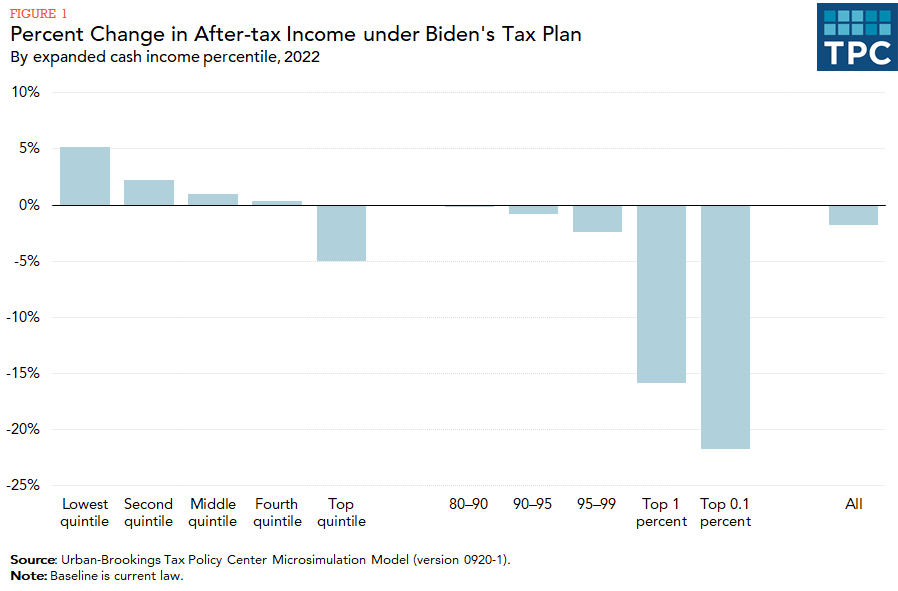 Averages can be misleading

Keep in mind that the average tax change for a given income group—especially those low- and moderate-income households benefiting from his tax cuts—can be misleading. Because many of Biden’s proposed tax breaks are available only to those in specific circumstances—families with children, first-time homebuyers and the like—some households would benefit significantly more than others.

For example, the lowest-income households would receive an average tax cut of about $750 under Biden’s plan. But households in that income group with children would see their average 2022 after-tax incomes increase by substantially more thanks to increases in the Child Tax Credit (CTC) and Child and Dependent Care Tax Credit (CDCTC).

The story is essentially the same if you exclude Biden’s corporate tax changes and look only at his individual income tax, payroll tax, and estate tax proposals. However, specific effects would be somewhat different. For instance, the average tax increase would fall to about $600. Middle-income households would get an average tax cut of roughly $1,000, and the top one percent would see their average tax burden rise by about $220,000.

Overall, Biden would make more than 50 tax changes for households and businesses.

He’d repeal tax cuts from the 2017 Tax Cuts and Jobs Act (TCJA) for taxpayers with incomes above $400,000. He’d also limit the value of itemized deductions to 28 percent for those making more than $400,000 and impose Social Security payroll taxes on earnings over $400,000. He’d tax capital gains and dividends at the same rate as ordinary income for those with incomes above $1 million, tax unrealized capital gains at death, and raise estate taxes.

For low- and middle-income households, he’d increase and make fully refundable the CTC (for 2022 only) and the CDCTC (permanently). He’d create new tax credits for first-time home buyers, family caregivers, and low-income renters, and replace the deduction for retirement saving with a refundable tax credit.

Biden has added several proposals in recent months that were not in TPC’s March analysis. They include:

TPC also assumed that Biden generally would limit his proposed tax increases to households making $400,000 or more, tracking a promise he has made repeatedly during the campaign.

These changes would significantly reduce the size of Biden’s net tax increase and provide generous new benefits for low- and moderate-income households and domestic manufacturers.

But the basic story remains the same: A President Biden would substantially raise taxes on high-income households and businesses to help fund an ambitious domestic spending agenda.

This blog has been updated to reflect revisions in TPC's analysis of the foreign minimum tax provisions of Biden's tax plan.