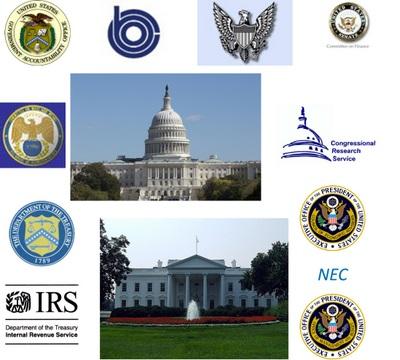 I’m preparing a presentation on our tax system for a group of visiting foreign tax officials and they wanted to know how responsibilities are divided within the federal government.  Seems like a fair question.

In other countries, the process is often quite streamlined:  a Ministry of Finance, which makes the political decisions, a Treasury Department, which houses the professional staff for the ministry, and an Inland Revenue Service, which administers the tax system and is sometimes actively involved in policy formation.

The US process is a tad more decentralized (by which I mean, insane).

Because it’s so easy to get images off the internet, I decided to illustrate the federal process with a mélange of logos/images for the agencies and committees involved.  (See above.)  I filled a page and had only scratched the surface.

In Congress, the House Ways and Means Committee originates tax legislation and holds hearings on various tax related subjects as well as a markup in which a bill may be read (typically the members waive this step) and amendments are considered.

Other Congressional committees also like to get in on the action.  The House and Senate Budget Committees set the overall parameters for tax and spending in the rare years when they pass a budget resolution.  They also like to hold hearings on taxes.

I’ve also been invited to testify on tax issues before the Small Business and Appropriations Committees. Probably other committees get in on the fun, but they haven’t called me.

The Congress has various agencies that work on taxes.  The nonpartisan Joint Committee on Taxation is the designated expert adviser on all things tax.  It prepares pamphlets with background information before major hearings and its chief of staff will often testify and participate in markups.  The JCT estimates the revenue effect of all tax proposals and it prepares an annual compendium of tax expenditures.

The nonpartisan Congressional Budget Office is responsible for estimating current and future tax receipts, which serves as the baseline for JCT’s estimates.  Its staff writes reports on various tax issues, often in collaboration with JCT, which calculates any revenue estimates.  Every two years, it puts out a list of “budget options”—a sampling of options to reduce the deficit or improve the functioning of the government.

But several other nonpartisan Congressional agencies also write about and research tax issues, including the Government Accountability Office and the Library of Congress’s Congressional Research Service.

And then there are partisan outfits, including the Democratic and Republican staffs of the Joint Economic Committee and partisan “study groups” that put out documents in support of their party’s positions.

There is a similar panoply of agents in the Administration.  The lead policy analysis office is the Office of Tax Policy at the Treasury, which provides the executive branch’s revenue estimates, revenue baseline, and tax expenditure estimates, but also advises on development of policy and writes tax regulations with the IRS.

The IRS is, of course, also responsible for administering the tax system, which often involves policy inferences when legislative language is unclear (not uncommon).  The IRS compiles tax datasets that are used by Treasury and the JCT (as well as a sanitized version available to researchers outside government) and publishes statistical tables and analyses.

The Office of Management and Budget coordinates estimates for purposes of producing the budget and also publishes its own list of tax expenditures (which it gets from the Treasury).  OMB also serves a policy coordination function, often convening meetings to bring together officials from various agencies who are interested in tax legislation.  (Almost everyone in the Administration is interested in tax legislation because they see it as one channel to advance their priorities.  (See my recent rant on tax expenditures.))

Various offices in the White House float ideas about tax policy, including the Domestic Policy Council and the Council on Environment Quality.  The National Economic Council is supposed to serve as the coordinator among all of those tax policy wannabees.  (You’ll recall that OMB also plays a coordination role and it’s interesting to see what happens when the competing coordinators cross signals.  The NEC, whose director sits in the West Wing, usually wins those turf battles.)

And the President’s Council of Economic Advisers also plays a role, whose importance waxes and wanes depending on the Administration and the relative strength of the CEA chair, NEC chair, and Treasury secretary. By all accounts, CEA played a very strong role in the Bush Administration when a former Treasury tax official, Glenn Hubbard, was at the helm.

But wait, there’s more!  There are thousands of subnational taxing authorities, including state and local governments, school, water, and transit taxing districts, and other taxing entities that I can’t remember right now.  Other countries also have regional and local tax authorities, so maybe we do not stand out so much in that category.  But the Tax Foundation complains that “There are nearly 8,000 sales taxing jurisdictions, each with their own bases and rates…”

Is it any wonder that our tax system is somewhat incoherent?