The Trump Administration continues to tout the idea that, thanks to the Tax Cuts and Jobs Act (TCJA), Americans will be able to fill out their individual income tax returns on a post card—or what the president calls “a single, little beautiful sheet of paper." I can’t speak to its beauty, but the tax year 2018 Form 1040 won’t make it on a single page.

The 2017 IRS Form 1040, the basic document most taxpayers use to file, includes 98 lines and boxes for calculating tax payments. For 2018, the TCJA is likely to eliminate a grand total of five (or maybe six) of those lines. And the new law will likely require at least one new one.

That would make for a really big postcard (or really tiny type).

Then there are the additional worksheets and schedules, some of which will get more complex. Owners of pass-through businesses, for instance, will have to do multiple new calculations in exchange for a chance to deduct 20 percent of their business income. Millions more households will have to file a Schedule 8812 that will allow them to take the expanded Child Tax Credit. These may be sweet new tax breaks, but they’ll mean more work, not less.

Treasury Secretary Steven Mnuchin notes that many more filers will take the standard deduction. And he is right. The Tax Policy Center estimates that about 27 million fewer taxpayers will itemize under the new law. But that won’t get them a postcard.

Taking the standard deduction means taxpayers won’t have to file a Schedule A, though many still will have to fill one out to learn whether they should itemize or not. But because 19 million filers will continue to itemize, line 40 on the 1040 isn’t going anywhere.

To see what is likely to happen to the 1040, here is an annotated version. 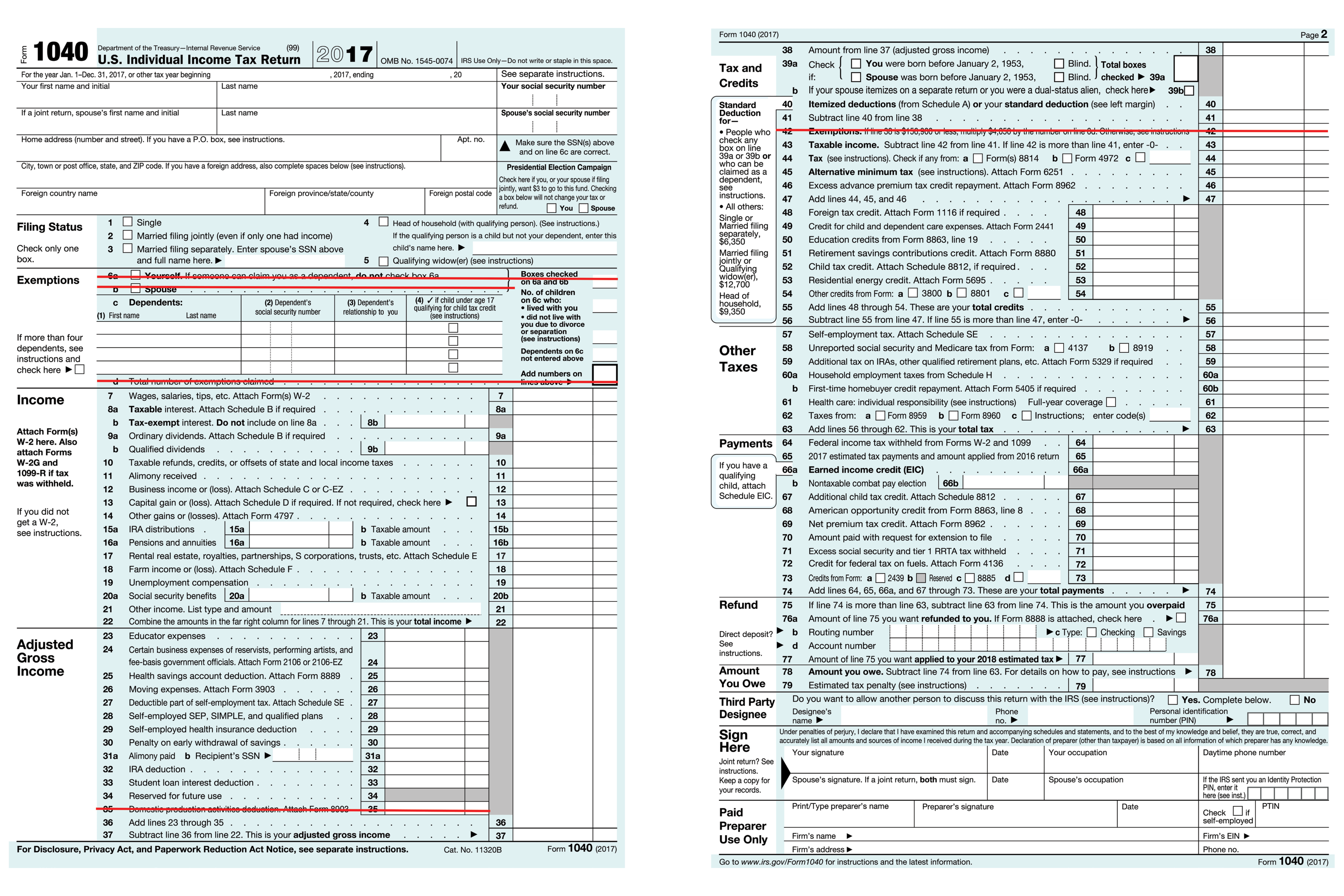 Lines 6a, 6b, 6d, and 42 will go away since they show the personal exemptions that the TCJA repealed. Line 35, which taxpayers used to report the now-repealed domestic production activities deduction, will also disappear.

However, one of those lines probably will be recycled to report the special deduction for income from pass-through businesses such as sole proprietorships and partnerships.

And that’s about it.

One reason: Because the TCJA failed to eliminate many tax preferences, their lines on the 1040 live.

For example, the TCJA changes the tax treatment of alimony, which takes two lines on today’s 1040. But the change won’t take effect until 2019. Besides, since alimony payments under current divorce decrees will be treated the same way as under the old law, the lines will have to stay.

Similar story with moving expense deduction. Most people will lose it, but military households keep it. Thus, the line stays in the ranks.

Then there is the Alternative Minimum Tax. The TCJA has reduced the number of taxpayers subject to the tax from about 5 million to only about 200,000. But millions of others still will have to figure whether they owe it or not. The IRS may eliminate the AMT line on the 1040, but people will have to report their alternative tax amount somewhere.

About the postcard: The IRS already has one. Form 1040 EZ is just 14 lines long and about 24 million filers used it in 2015, according to the IRS. But to qualify, your taxable income must be $100,000 or less, you can’t have any investment income except for $1,500 or less in interest, and you can’t claim any dependents. As a result, you can’t use the EZ if you want to claim the Child Tax Credit or—if you have children—the Earned Income Tax Credit.

Finally, there is the Form 1040 A, sometimes called the short form. About 40 million filers used one in 2015. And it may get more takers in tax year 2018 thanks to the new law. But you still can’t use it if you make more than $100,000, have business income, or take certain credits. Besides, it is still two pages long.

Of course, we really won’t know what any of the new forms will look like until the IRS completes its redesign almost a year from now. And, of course, this whole discussion is kind of silly since more than 85 percent of taxpayers file electronically.

But one thing is certain—except for the EZ, the 1040 will be more than one page long and won’t fit on a postcard. You get to decide whether it is beautiful.