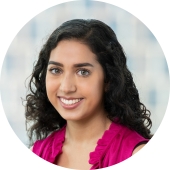 The TCJA’s Cap On Mortgage Interest Deductions Tells Us That Taxes Matter, Up To A Point

When Congress passed the Tax Cuts and Jobs Act in December of 2017, it made a number of changes to the individual income tax (almost all of which sunset after 2025).  One of these changes lowered the value of mortgages on which homebuyers could deduct interest from taxable income from $1 million to $750,000.  Which raised a question: Would the tax change encourage homebuyers in 2018 to shrink the size of their mortgages from $1 million to the still fully-deductible $750,000?

The answer turns out to be…complicated.  And it suggests that while the revised tax law may have changed the behavior of some homebuyers, the effects may have been limited by other, non-tax factors.

We plotted mortgages completed in 2017 and 2018 and found that for 2017, the number of high-dollar mortgages (defined as those over $700,000) taken out had noticeable spikes at several dollar amounts ($750,000; $800,000; $900,000; and $1 million).  The largest of these spikes was at $1 million. For 2018, the overall pattern was similar, with a large spike in mortgages taken out at $1 million, but the largest spike was for mortgages of $750,000.  So, it appears that tax incentives do matter to people taking out mortgages. But we also found a fairly large number of million dollar mortgages taken out in 2018, even though interest on those loans was no longer fully deductible. Taxes matter, but so may other factors, such as the inertia of lenders or other features of the home-buying process. 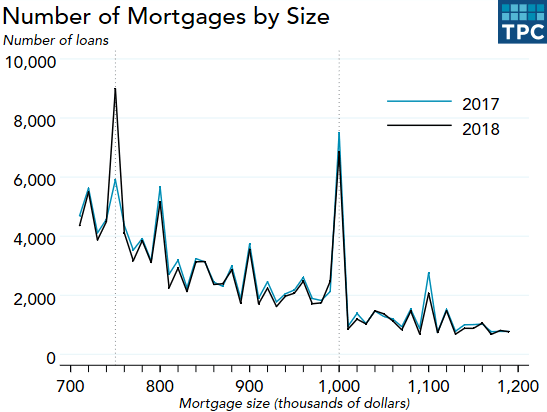 We weren’t surprised to see the sharp spike in the number of 2017 mortgage loans at exactly $1 million; the deduction of mortgage interest had been limited to $1 million mortgages since 1986.  While it is possible to take out a larger loan and just deduct interest on the first million dollars, filing taxes is easier if a person takes out a $1 million loan and a subordinate loan for the rest.

Why do people continue to take out $1 million loans? Perhaps it’s just because it’s a round number.  More likely, lenders are used to approving $1 million loans for high-end buyers and continued to do so even after the law changed. We don’t know whether the borrowers understood that interest on a quarter of their loan —$250,000—would no longer be deductible. Perhaps they are looking forward to deducting the additional interest in 2025, when the law sunsets.

It’s clear that the TCJA had an effect on the behavior of mortgage borrowers. But we may have to wait for a few more years to know whether the TCJA’s lower deduction cap on mortgage interest will overcome the lingering effects of the prior law and lender habits.