The conference agreement on the Tax Cuts and Jobs Act would reduce taxes by about $1,600 on average in 2018, with the biggest benefit going to households making between $308,000 and $733,000, according to a new analysis by the Tax Policy Center.  Middle-income taxpayers would pay about $900 less than under current law, about 1.6 percent of after-tax income, while the lowest income households would get an even more modest tax cut compared to current law.

While the details of the TCJA have changed throughout the congressional debate, the basic story of the bill has remained the same since it was first introduced in early November. Most households would get a tax cut at first, with the biggest benefits going to those with the highest incomes. After 2025, when   nearly all of the bill’s individual income tax provisions are due to expire, only high-income people would get a meaningful tax cut. 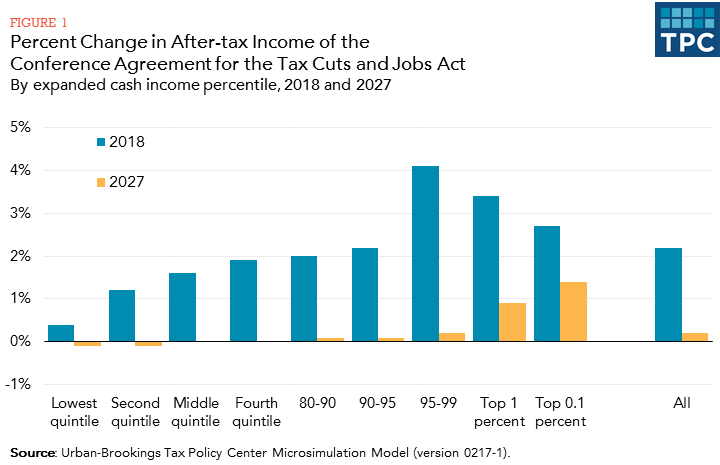 By 2027, after nearly all of the bill’s individual income tax provisions are due to expire, the average tax cut would fall to about $160. Except for those in the top one percent (who would be making $900,000 or more) households in each income group would be paying roughly the same amount of tax on average as under current law. And more than half would pay more in taxes than if the law had never changed.

The TCJA includes several major changes that would primarily affect low- and moderate-income households. It would reduce individual income tax rates, increase the standard deduction, and expand the child tax credit. However, it would also end the personal exemption, a trade-off that could raise taxes for low-income families with a large number of children. It would also change the way the tax code is adjusted for inflation, a revision that would slowly increase taxes on all households.

High-income households would benefit primarily from five tax changes—lower income tax rates on ordinary income, a more generous Alternative Minimum Tax, the bill’s 20 percent deduction for income from pass-through businesses such as partnerships, the corporate income tax rate cuts, and the roughly doubling of the estate tax exemption to $22 million for couples.

What would these average tax cuts mean for American households? For middle-income people, an extra $900 would pay for about seven months of gas. By contrast, those in the top one percent could pick up a nice Mercedes C Class Coupe with their $50,000+ average tax cut.