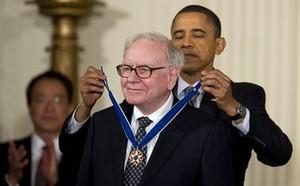 I'm trying a new thing in the blog--imagining a debate between a smart conservative and liberal economist on a contentious tax policy issue. Here liberal economist Keynes and conservative economist Hayek debate the Buffett Rule--President Obama's proposal that millionaires pay tax rates at least as high as middle-income people.  Let me know whether you think this works.

Keynes: I don’t think the country music legend and the billionaire philanthropist are related.  But that’s not important.  How could you object to the Buffett Rule?  It’s the common sense idea put forward by President Obama that millionaires and billionaires shouldn’t pay a lower rate of tax than middle-income working people.  It’s obscene that Warren Buffett pays less tax on his capital gains than his assistant Carrie pays on her hard-earned salary.

Hayek: That wouldn’t bother me even if it were true, but it’s not. Warren Buffett’s capital gains are heavily taxed.

Keynes: Not true.  He pays a top rate of 15% on his gains.  His assistant (who’s pretty well paid) probably faces a 25% or higher income tax rate plus another 15% in payroll taxes (including the employer’s part, which, as economists, we know she ultimately pays).

Hayek: Interesting that you understand economic incidence when we’re talking about the payroll tax, but what about the corporate income tax, which Warren’s company Berkshire Hathaway pays in spades?  Who do you think pays that?

Keynes: Yesterday when we were arguing about the corporate income tax, you claimed that workers like Carrie paid the tax.

Hayek: And you argued that the corporate tax was paid by shareholders like Warren.  Congratulations.  You won.  Warren, who owns 30% of Berkshire Hathaway, pays a huge amount of corporate income tax.  And since that income has already been taxed once at the company level, the right tax rate on capital gains is not 15%.  It’s zero.  Otherwise, it’s an unfair and inefficient double tax.

Keynes: You’re so lucky to be completely unconstrained by any notion of consistency.  But suppose you’re right.  It’s definitely not unfair to tax Warren’s capital gains.  He knew the tax would be there when he made the investment.  Nobody held a gun to his head.  So he’s earning a high enough rate of return to compensate for the tax.

Keynes: Not really.  Lots of Berkshire Hathaway stock is owned by pensions funds, 401(k) plans, foreigners, and nonprofits—all of whom are unaffected by the capital gains tax.  The capital gains tax doesn’t affect BH’s supply of capital.

Hayek: Thanks for clarifying, Mr. Consistency.

Keynes: And it’s also patently untrue that the corporate income tax would justify a zero tax rate on capital gains.  Although Berkshire Hathaway might pay a lot of income tax, many corporations avoid all or most of their tax bill.  In 2010, GE—one of the richest companies in the world—paid no income tax.  Individual level taxes on capital gains and dividends are the only taxes their shareholders face.  If we stopped taxing gains and dividends, which I assume you’d also abolish…

Hayek: (interrupting) He’s slow, but maybe he’s finally getting it…

Keynes: If we abolished shareholder taxes, we’d just make corporations into even bigger tax shelters than they already are.  I’d be perfectly happy with taxing corporations as we do partnerships and sole proprietors (i.e., allocating income to shareholders where it would be subject to full individual income tax rates).  But double taxation is a dumb argument for cutting or eliminating capital gains tax rates.  Especially when you consider that nearly half of capital gains are on assets other than corporate stock.

Hayek: I agree that integration would be a good idea¸ but you and I both know that’s not going to happen.  In the real world, low tax rates on capital gains are a good compromise.  And Warren Buffett should stick to country music.

Note:  Joel Slemrod and I first tried imagining a debate between smart economists here.  We called our protagonists Adam and Nick, but my wife Missie pointed out that somebody named Adam apparently gives late night sex advice on cable TV.  So I decided to resurrect two of the most famous economic partisans of all time, John Maynard Keynes and Friedrich Hayek.  This isn't very original since John Papola and Russ Roberts have produced brilliant rap videos in which the two icons face off on macroeconomics.   I'm afraid my dialogues are destined to remain static.

Howard Gleckman posted a critique of the Senate's proposal to implement the Buffett Rule here.

This was originally posted on The Impertinent Economist blog.