Tax Expenditures Remain A Significant Share of The Economy

Despite years of widespread discussion among lawmakers about the need to broaden the federal income tax base, tax expenditures have remained remarkably stable as a share of the economy and will likely continue to do so, according to a new study by the Tax Policy Center.

After declining from 9 percent to 6 percent of Gross Domestic Product (GDP) following passage of the Tax Reform Act of 1986, tax expenditures gradually increased over the next two decades, reaching 7.4 percent of GDP in 2010. The 2017 Tax Cuts and Jobs Act (TCJA) reduced the share in 2018-25, but it will rebound to its historical levels if TCJA’s individual tax cuts expire as scheduled in 2025. (Figure below) 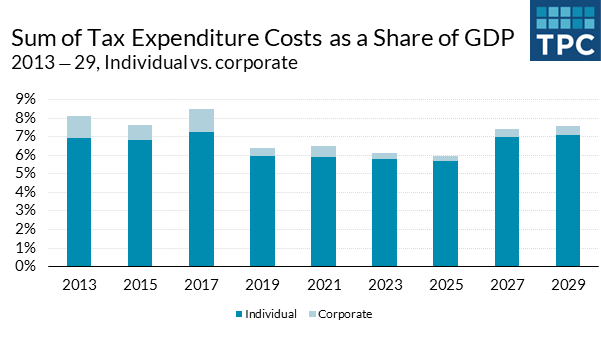 Tax expenditures are provisions of the federal income tax that allow special exclusions, exemptions, or deductions from taxable income or provide special credits, preferential tax rates, or deferral of tax liability. They are intended to promote economic and social policy objectives and provide assistance to selected groups of taxpayers.

The vast majority of tax expenditures benefit households rather than firms. And most substitute for programs that could be designed as direct spending instead of tax breaks.

Tax expenditures represent a significant share of federal support for homeownership, health insurance coverage for working families, retirement security, and financial support for low-income families with children. They also promote selected forms of saving and investment. In fiscal year 2019, they added up to 6.6 percent of GDP and reduced federal income and corporate tax receipts by about 42 percent. If the individual provisions of the TCJA expire at the end of 2025, tax expenditures will rise to 7.6 percent of GDP by fiscal year 2029.

Our analysis does not include President Biden’s campaign proposals, the temporary increases in the child tax credit and the earned income credit in the American Rescue Plan, or the tax changes in his recent proposals for financing infrastructure. If Congress enacts these changes, it may substantially alter projected tax expenditures for the next decade.

But the net effect of Biden’s proposals on the sum of tax expenditures is uncertain. Some will reduce tax expenditures directly by ending preferences for the foreign-source income of multinational corporations, raising tax rates on capital gains, ending step-up basis for capital gains of individuals, and imposing new caps on itemized deductions.

Other Biden proposals – new and expanded tax credits for renewable energy, domestic manufacturing, rental housing, first-time home purchases, and other activities – would add to tax expenditures. And his proposed increases in corporate and individual income tax rates would increase the revenue loss from existing tax expenditures that remain in the law.

It remains to be seen how Biden’s tax agenda will change the total cost of tax expenditures. But history suggests they are here to stay.