A Tax Credit to Give Middle-Class Workers a Raise

When the middle class was suffering from the ravages of the Great Depression, demagogues of the right and left blamed easy scapegoats and offered populist solutions.  They didn’t prevail because a Democrat, Franklin Delano Roosevelt, promised his sweeping “New Deal,” a series of dramatic policies aimed at addressing workers’ anxieties.  He pushed many of his ideas through Congress and was reelected three times.

It is time that Democrats relearn this lesson and think again about the value of big ideas. Here’s one: A 100 percent refundable tax credit on the first $14,000 of wages funded by a dedicated Value-Added Tax (VAT).

Its FDR-era model: Social Security.  That program combined a brand new tax—the payroll tax—with a revolutionary new entitlement program that would eliminate poverty for senior citizens who had worked all their lives.  Social Security is wildly popular. People support the regressive payroll tax because they like what it pays for and because it’s automatically withdrawn from their paychecks, unlike the reviled income tax that requires an obvious and painful annual reckoning.

A telling chart illustrates the economic anxieties of many middle-class workers, who have not gotten a raise in years.  It is true that wages don’t include the value of increasingly expensive health insurance, which most full-time employees get at work. But that doesn’t help cash-strapped workers buy groceries, pay their rent, or send their kids to college. 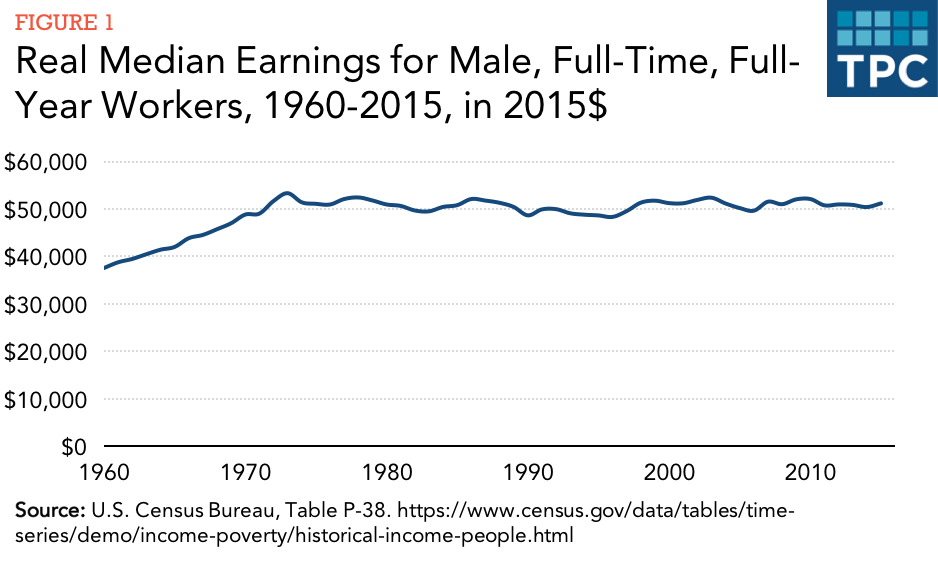 There are many reasons why economic growth has left so many behind. Trade and immigration—the bogeymen of populists—are a tiny part of the story.  But the big culprit, most economists believe, is technology.  While automation helps skilled workers, machines often do a better job than low-skilled labor and at lower cost. The cheap competition depresses wages and creates job insecurity. The coal industry typifies the problem: between 1980 and 2015, employment dropped more than 60 percent, even though US coal production rose 8 percent.

The owners of capital, meanwhile, do just fine.  Automated factories will be even more productive and profitable than human-powered start-ups.  Absent intervention, inequality will continue to rise and worker anxiety will grow.

Enlightened policy should aim to make work pay and help workers adapt. Better education and training will help. But a permanent solution would create a mechanism to automatically translate economic growth into higher wages.

My proposal, inspired by Social Security, would dedicate a new tax to boost stagnating wages.  A broad-based VAT would be dedicated to finance a 100 percent refundable tax credit on the first $14,000 of every worker’s earnings. (We haven’t scored this proposal yet, but rough calculations suggest that the budget-neutral VAT rate would be in the ballpark of 15 percent.)  The cap on the credit would be indexed to a rolling average of Gross Domestic Product—that is, economic growth would automatically increase the subsidy, allowing workers to share the gains.  The credit would be advanced to most employees in their paychecks, and, like other earnings, would be subject to income and payroll taxes.  Phasing the credit and the VAT in over five years would help minimize disruptions.

Every worker would get an immediate raise, more than offsetting the VAT for all but high-income people.  The credit would boost payroll tax revenues, which would provide a boost to Social Security and Medicare’s finances. The VAT would promote saving and investment and since the revenue would be strictly earmarked to finance the new program, it would not spur additional spending—a concern among some conservatives.

This may be too ambitious for today’s mainstream Democrats, who are terrified of proposing a new tax. Instead, party leaders have proposed a “Better Deal” plan: tax credits for job training, pressure on drug companies to lower prices, and tougher anti-trust enforcement. These may be safe and “poll-tested” but they won’t fix the problem of inequality that Democrats profess to worry about. And the last presidential election suggests that small, safe, incremental options don’t work well enough in the poll that matters most.

If Democrats are not interested, perhaps Republicans might be. Yes, the wage credit is redistributive. But it encourages work, and it is a simpler and more comprehensive spur to labor force participation among childless adults than expanding the EITC—an idea that has bipartisan support.  It is also a market-based way to help middle-class workers deal with the new economy without creating a new unfunded government spending program. And it may help capitalism survive the 21st century, just as the New Deal helped it get through the Great Depression.