States Enjoyed Another Stellar Quarter Of Revenue Growth; But The Longer-Term Fiscal Outlook Is Cloudy

States closed their fiscal 2018 books at the end of June on a positive note. But they shouldn’t bank on the good times lasting forever. In fact, they have more reason for caution than optimism going forward.

According to the Tax Policy Center’s State and Local Finance Initiative’s latest “State Tax and Economic Review” quarterly report, states collected slightly over $1 trillion in tax revenues in fiscal year 2018, a gain of 7.8 percent over 2017. But the revenue growth was uneven among the states and across revenue sources. Much of the growth came from individual income taxes that have grown by double-digit percentages for three consecutive quarters. While a less significant revenue source, corporate tax revenues were strong during the period as well. 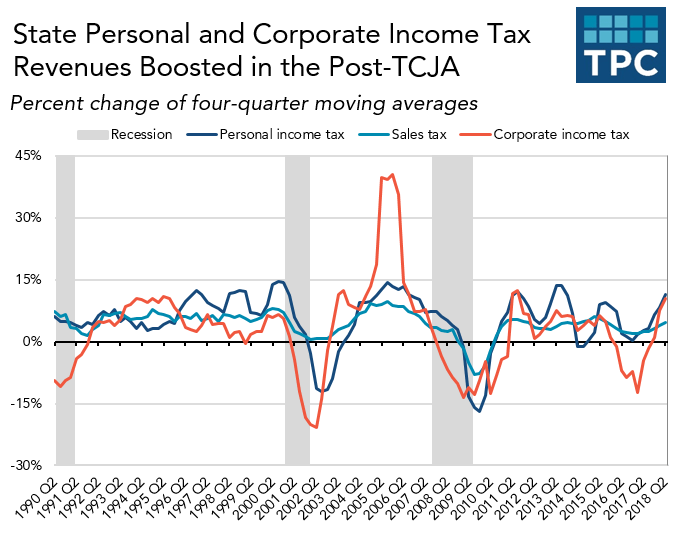 But that revenue growth comes with a warning: Much of it may have resulted from the timing of tax payments in response to the debate and eventual congressional approval of the Tax Cuts and Jobs Act (TCJA). As a result, those revenue increases may be unsustainable.

Individual income tax revenues have been volatile for many years. Nearly two decades ago, my former colleague Donald Boyd had rightfully warned that “income tax is dangerously volatile,” which posits risks for states’ longer-term fiscal outlook. The reasons: Income tax revenue often depends on the performance of financial markets and the tax planning decisions of high-income taxpayers.

First, let’s look at the financial market performance. The markets saw great gains throughout 2017 and the first eight months of 2018. While equities have weakened since September, their strong performance throughout 2017 likely contributed to the growth of personal income tax revenues.

Second, we can use past experience to hypothesize about the planning decisions of high-income taxpayers. For example, it is likely that their expectation of a major tax cut in calendar year 2017 encouraged some investors to delay capital gains realizations from tax year 2016 into 2017. Once Congress passed the TCJA in December 2017, some high-income taxpayers likely accelerated asset sales they otherwise may have made in 2018. That way, they could still fully deduct from taxable income their state and local taxes imposed on these sales before the deduction was capped by the TCJA.  In addition, some taxpayers also accelerated payments of other state and local taxes, such as property taxes and estimated income taxes, into calendar year 2017.

We still don’t have complete data to estimate the magnitude of income shifting from tax year 2018 into 2017, but we can draw some early conclusions from 2016 tax return data. While the markets enjoyed a strong year in 2016, capital gains tax revenues fell sharply. According to IRS data, the number of taxpayers reporting capital gains declined by 1.0% in tax year 2016 compared to 2015, and the amount of capital gains taxes declined by 10% or nearly $71 billion. Declines of this magnitude indicate that income shifting into 2017 likely did happen.

The TCJA likely affected other tax revenues as well.

Unlike personal and corporate income tax collections, sales tax revenues grew modestly and relatively consistently in the recent quarters. It is likely that sales tax revenues may continue to grow at that pace or even experience a moderate boost  as a result of the Supreme Court’s June ruling in the Wayfair case, which gave states the authority to require out-of-state retailers to collect sales taxes. Twenty states already are requiring sales tax collections by online and other remote sellers. An additional nine states will require collections in the coming months. Other states including California and New York likely will follow suit soon.

As a result of this post-TCJA uncertainty, especially as it applies to the individual income tax, state officials would be wise to view recent revenue increases as a one-time windfall and anticipate slower revenue growth in the medium term.