Much of the recent revenue growth came from increases in personal income tax revenues in late 2017 and the first half of 2018, but those revenues fell sharply in December 2018 and January 2019, according to preliminary data collected by the Tax Policy Center. The declines are mostly attributable to the impact of the 2017 Tax Cuts and Jobs Act (TCJA) that led to a one-time spike in income tax collections last year and the sharp fall at the end of 2018. In addition, the wild swings in the stock market over the past four months cast uncertainty over some state budgets.

State tax collections grew 1.5 percent in the first seven months of state fiscal year 2019 (July 1, 2018 through June 30, 2019) compared with the same period in fiscal year 2018. Growth varied substantially by revenue source and by state. Personal income tax revenues fell by 3.7 percent, but sales tax collections rose by 5.7 percent. State corporate income tax revenues skyrocketed by 20.2 percent in the first seven months of fiscal 2019, but these revenues make up a small percent of most state budgets.

There were large variations across the states, particularly when looking at the fiscal 2019 year-to-date trends in income tax revenues, with some states reporting growth while others reporting substantial declines. Declines were most pronounced in states that rely heavily on high-income taxpayers, such as California and New York. Revenues also fell sharply in Connecticut, Massachusetts, and New Jersey where many officials blamed TCJA’s cap on the state and local tax (SALT) deduction. New York Governor Andrew Cuomo called the provision an “economic civil war” against blue states.

States expected income tax revenue to fall but underestimated the magnitude of the decline.  California and New York, home to nearly 30 percent of the nation’s millionaire taxpayers, figured wealthy taxpayers would shift income to take advantage of the uncapped SALT deduction in 2017. But the amount of income shifting into 2017 and the subsequent size of the revenue decline in December 2018 was unanticipated by state officials and alarming to them. 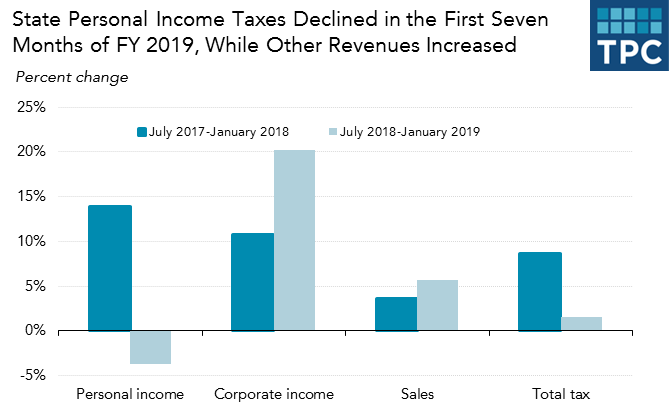 While TCJA-related timing was partially responsible for lower-than-expected individual income tax revenues, big swings in financial markets may have also played a role. The stock market was strong throughout the first eight months of 2018, but equities weakened substantially late in the year and early in 2019. Looking ahead, signs are increasing that the nation’s economic growth rate may be slowing.

Most governors already have proposed their FY 2020 budgets, relying on revenue forecasts that were prepared before the December fall of personal income tax revenues. At this point, state revenue forecasters are hoping that April income tax return data show a rebound in estimated and final tax payments.

Overall, fiscal 2019 revenues are below forecasts in most states. Although the near-term economic outlook remains positive, state revenue forecasters should be cautious for the remainder of state fiscal year 2019 and for fiscal year 2020.