State forecasters expect revenue growth to remain sluggish through fiscal year (FY) 2016 according to an Urban Institute analysis of agency reports. In FY17, states project revenue growth will return to its average post-2000 rate but remain significantly below its long term average. 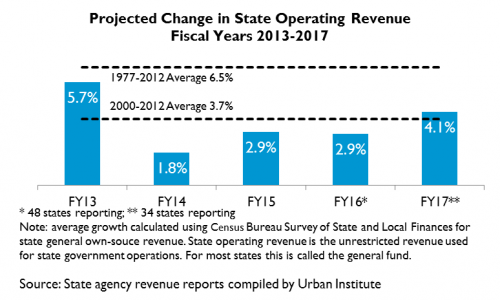 These state estimates are not adjusted for inflation. Using CBO’s forecast of the consumer price index, inflation-adjusted state revenue growth will be 1. 7 percent in FY 15 and 1.2 percent in FY16 compared to the long term real growth rate of 2.5 percent.

Energy states (Alaska, North Dakota, New Mexico, Louisiana, Texas, and Wyoming) are a special case, given the recent plunge in oil prices. These states project only half the revenue growth of non-energy states in 2015 but will pick back up in 2016. 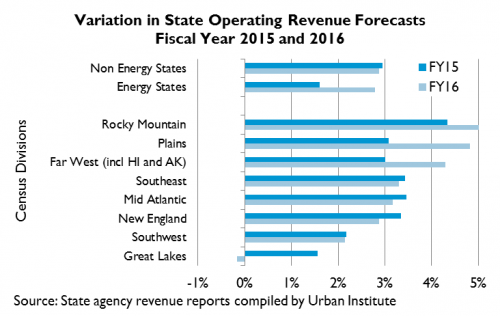 Revenue growth in the Great Lakes region will be subdued because of the expiration of Illinois’ temporary income taxes. On January 1, 2015, Illinois’ personal income tax rate fell from 5 percent to 3.75 percent and the corporate rate dropped from 7 percent to 5.25 percent. As a result, Illinois expects revenue to fall by $1.8 billion, or 6 percent, in fiscal year 2015 and $3.4 billion, or 11 percent, in 2016. Without Illinois, the Great Lakes region revenue growth would be 3.5 percent in 2015 and 3.6 percent in 2016

Texas accounts for over half of the revenue in the Southwest region. The sharp decline in energy equipment and services is driving a tepid outlook for Texas sales tax revenue, which accounts for 55 percent of the state's general fund revenue, slowing the growth for the whole region.

Almost all state legislatures have begun debating their FY 16 budgets. The estimates reviewed here provide little support for bold initiatives and together with other evidence on spending may suggest that many states will have trouble even meeting current needs.