This week, Colorado became the 14th state to either require or allow some pass-through businesses such as partnerships to pay state income taxes at the entity level rather than on their personal income tax returns.

Why does this matter? It’s an increasingly popular way for states to give some residents relief from the 2017 Tax Cuts and Jobs Act’s (TCJA) $10,000 cap on the state and local tax (SALT) deduction without lowering state tax revenue by a dime. 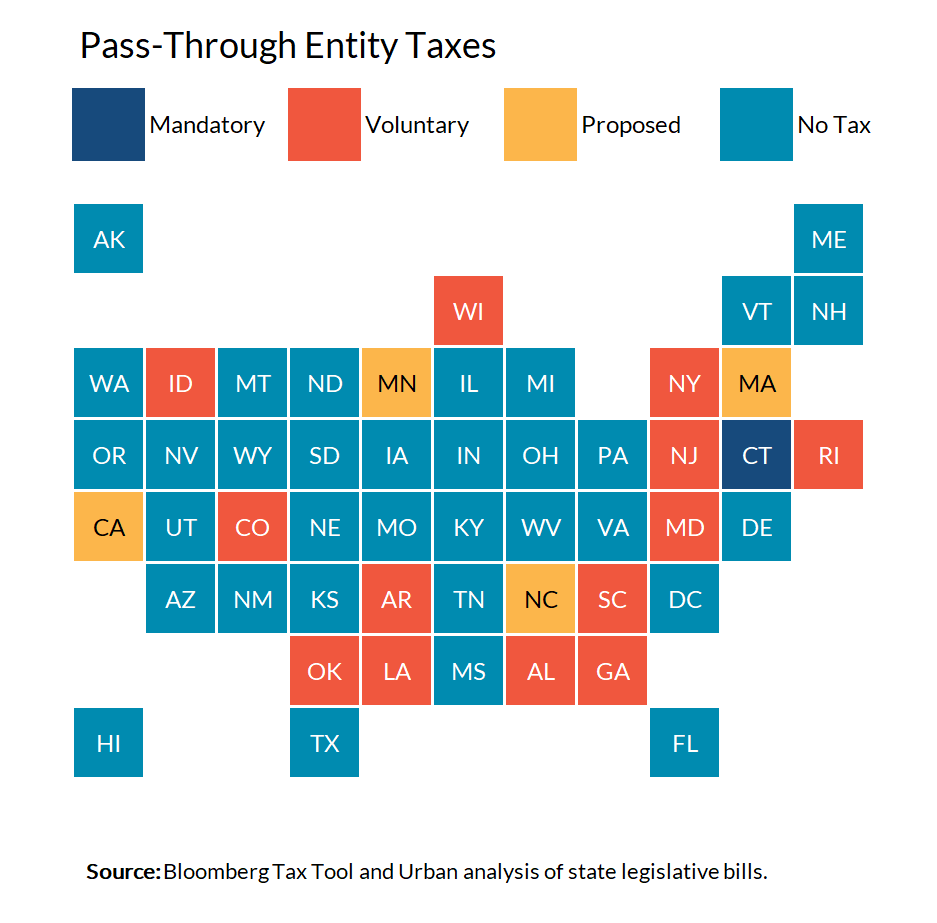 As soon as the SALT cap became law, states started to look for workarounds. The US Treasury Department disallowed others, but not this one.

The key is that the SALT cap applies only to personal income taxes, not taxes paid by businesses. Thus, business owners can deduct state income taxes without limitation if the taxes are paid at the business level.

Remember that there are different types of businesses—C corporations, and pass-through businesses such as sole proprietorships, partnerships, and S corporations. What separates them is not their size but what type of business tax they pay.

But here is the innovation: If income tax is paid by the pass-through business at the entity-level rather than on the owner’s individual state income tax return, the SALT cap is lifted for that income. That’s why many states are changing the traditional business tax equation and introducing a pass-through entity (PTE) tax.

In states such as New Jersey, business owners get a credit for their share of the tax. In states such as Louisiana, the owners’ state taxable income is reduced by the income included on the pass-through’s return.

Here’s how it works in New York: Any partnership or S-corporation may pay the tax on New York state income. The tax is imposed on the share of profits to individual (not corporate) investors. And it has a graduated rate depending on income. Once a business elects to pay the tax for a given year, the choice is irrevocable. Business owners then claim a credit against their New York individual income tax based on their share of PTE taxes. New York also allows credit for New York residents who might have PTE credits from other states.

These levies have passed muster with Treasury and IRS. Notice 2020-75 explains that the IRS will treat PTE-type taxes as imposed on the partnership or S corporation, thus as specified income tax payments that are exempt from the SALT limit. The guidance makes no distinction between Connecticut’s mandatory PTE tax or the voluntary levies in 13 other states.

The guidance applies only to specified income tax payments. Business owners still are subject to the SALT deduction limit for state property taxes or state income taxes on their wages. An eligible business must have at least two owners. Thus, sole proprietorships are ineligible.

Crucial to the states: This model is costless to them. While these new entity-level taxes can save business owners substantial federal taxes, the states still collect the same amount of income tax on these business earnings. Only federal tax liability declines.

But is this good policy? Since corporations already can deduct income taxes against their receipts, it could be seen as equalizing treatment of the SALT deduction across different types of businesses.

But PTE taxes create inequities based on type of income. For example, because these states now favor pass-through income over wages, a partner in a law firm can be effectively exempt from the SALT cap while an executive assistant or associate in the same firm remains subject to the deduction limitation. A doctor who is an employee of a corporation is barred from fully deducting state and local income taxes while a partner in a medical practice making the same income is exempt from the federal cap for these taxes.

Because the rules differ across states, businesses need to consider where partners live and where business income is generated. For example, non-resident partners might not benefit from the credits in their home state. Like New York, some states of residence allow credits against the taxes these partners owe from other states. But that isn’t always the case.

Keep in mind that these PTE taxes may be just a temporary fix. Congress may consider changes to the SALT cap in coming legislation. And the cap, along with all other individual tax changes in the TCJA, is scheduled to expire at the end of 2025.

Still, the entity-level tax work-around is likely to become increasingly popular among states. While it makes state taxes more complicated, it helps residents reduce federal taxes at no cost to the states themselves. What a deal.