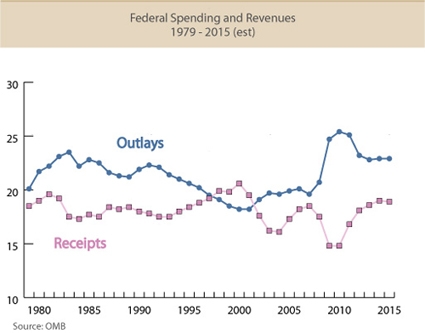 Starving the Beast or Free Lunch?

Senator John Kyl’s (R-AZ) recent insistance that tax cuts should “never” be offset with tax increases got me thinking about the governing philosophy behind this argument. In part, it is based on the idea that tax cuts are always good for the economy while tax increases are always bad. I’ll leave that one for another day, and instead focus on a second premise: The best way to cut government spending is to cut revenues.

This idea, colloquially known since the days of Ronald Reagan as “starve the beast,” seems at first glance to make perfect sense. After all, if you want to stop someone from spending, take away their checkbook. It worked great. Until the invention of credit cards.

Unfortunately, those who bought this theory never counted on a Congress whose insatiable desire to spend was encouraged, not curbed, by tax cuts. It hardly mattered whether Democrats or Republicans were in charge. In fact, for much of the past 30 years it turned out that Republicans were more enthusiastic about spending than Democrats. And delinking spending from taxes made all those new programs appear free, thus encouraging more of them.

Bill Niskanen, president of the libertarian Cato Institute and former economic adviser to President Reagan, figured this out years ago. Bill concluded that if 20 percent of spending is financed by deficits, people will perceive that government programs cost only 80 percent of their real price. And, not surprisingly, they will be more popular at the perceived discount than at their full cost.

In congressional testimony on July 14, Tax Policy Center’s Len Burman took this criticism another step. He argued that Niskanen understated the effect of deficits on spending. Len said, “The message during the last decade seems to have been not that spending and taxes cuts were available at a discount, but that they were free….Citizens could be forgiven for forgetting that there is any connection between spending and taxes.” 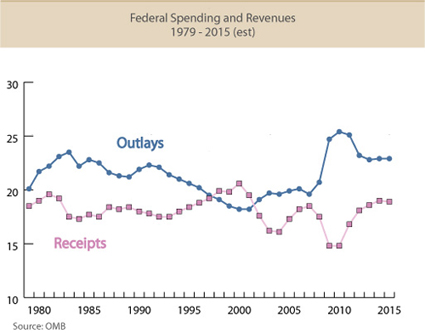 As you can see from the chart, there is absolutely no evidence that tax cuts have constrained spending over the past three decades.  In the early 1980s, taxes fell but spending rose. The same thing happened for much of the decade 2001-2010. In fact, the only consistent decline in spending was during the Clinton Administration, a time when tax revenues were rising, not falling.

Of course, this pattern was driven by more than just government policy. Recessions slowed revenues. Robust expansions increased them. But policy mattered. During the Reagan Administration, Congress cut taxes but increased military spending. During the George W. Bush Administration, Congress passed a massive tax cut, but fought two wars and vastly expanded Medicare (75 percent of the Medicare drug benefit is funded by general revenues, not premiums). And during the Obama Administration, Congress again cut taxes while spending tens of billions bailing out banks and auto companies (an initiative begun under Bush) and hundreds of billions trying to stimulate a sagging economy.

Whatever you think of the merits of these spending initiatives, the public was never forced to consider the consequences of paying for them. Would we have fought the Iraq War if it was accompanied by a tax hike? Would we have created the Medicare drug benefit if we had to pay for it?  We’ll never know because Washington never bothered to ask the question. Instead, it spent more even as it cut taxes. No beast was starving. Instead, we were gorging on a free lunch.

Starve the beast has received a real-world 30-year test. As economic theory, it deserves a place on the ash heap of history. If Senator Kyl wants to cut spending, he’s not going to get there by cutting taxes. He’s just going to have to, well, cut spending.