Senator Kamala Harris (D-CA) is proposing to raise the incomes of working families through a new tax proposal called the “LIFT (Livable Incomes for Families Today) the Middle Class Act”.  This new refundable tax credit would match up to $3,000 of earnings for single people and $6,000 for married couples (see figure) who are at least 18 years old. Students who receive Pell grants would qualify and, unlike other credits designed to reward work – including the earned income tax credit (EITC) – this new tax credit would deliver substantial benefits to workers without children at home.  Importantly, recipients could choose to take the credit monthly, and not wait until tax filing season – a schedule that could help stabilize incomes throughout the year. This new tax credit would be in addition to any EITC the family qualifies for. 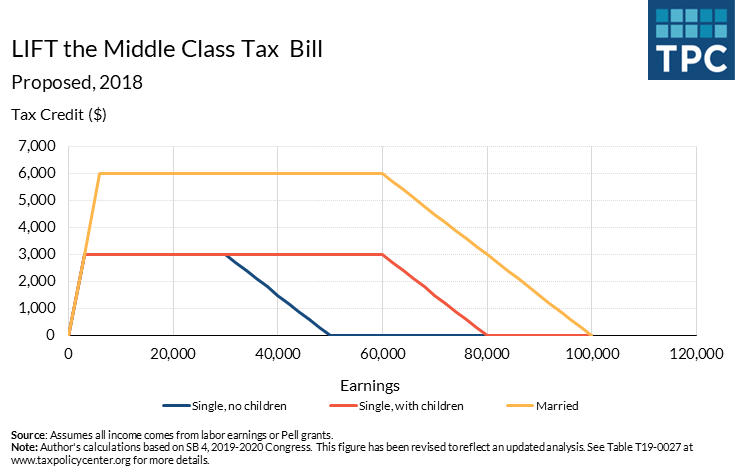 Creating a tax credit that is the same for workers with and without children at home would be a step toward equalizing tax benefits between custodial and noncustodial parents.

Subsidizing work – without tangling it up with the presence of children – could also make the credit both easier to administer and to claim. Although the largest number of EITC errors are attributed to income misreporting errors, identifying which tax unit should claim a child is the largest source of erroneous payments. Under this new credit, there is no need for claimants to wade through sometimes complicated qualifying child rules to determine eligibility – and parents living apart can both benefit. It’s a lot easier for the IRS to verify how much you earned than who you lived with.

Finally, delivering the tax credit on a monthly basis would make it easier for people with irregular incomes to stabilize their finances. A recent demonstration project in Chicago suggested that recipients favored a monthly credit and those who received funds throughout the year borrowed less and experienced less financial stress. Because many credit recipients would receive the new credit and their existing EITC, the benefits could be even more pronounced. On the downside, like all credits that phase out, the proposed tax credit would increase the marginal tax rates faced by taxpayers in the phase-out ranges, a potential work disincentive.  Prior research on the EITC suggests this effect would be modest and mostly apply to secondary earners in married couples.

That plan would, no doubt, be expensive. Harris suggests paying for it with a fee on some financial institutions and by repealing the parts of the Tax Cuts and Jobs Act that do not provide tax relief to families with incomes less than $100,000