The Tax Policy Center estimates that repealing these three ACA provisions will reduce the average tax burden by $350 in 2029.  The average tax cut grows with income, increasing from $40 for the lowest-income households to over $1,000 for the highest-income 20 percent of households. Relative to income, the biggest beneficiaries are households with incomes in the middle and fourth quintiles, those making between $58,000 and $182,000. Their after-tax income will rise by .4 percent, or $330 for the middle quintile and $590 for fourth quintile, compared to .2 percent for the bottom 20 percent and .3 percent for the top quintile. 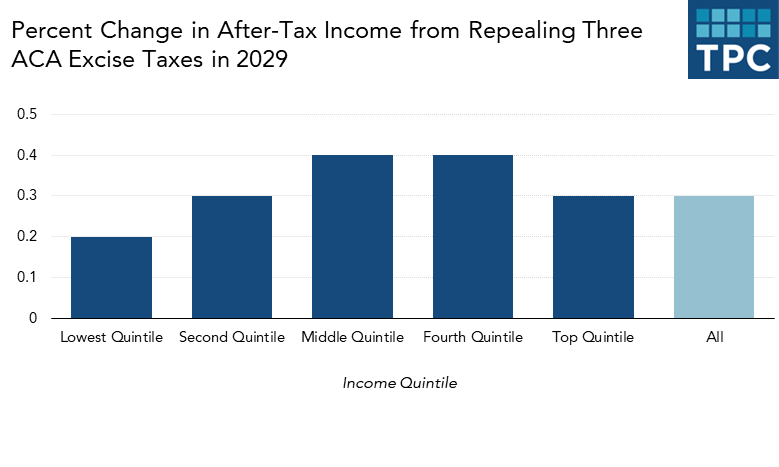 The Joint Committee on Taxation (JCT) projects repealing these three excise taxes will cost the government $373 billion over the next ten years.

The legislation, the Further Consolidated Appropriations Act of 2020, also extended various expiring tax provisions and made some modest changes to the tax treatment of retirement plans. TPC has not done distributional analyses of those provisions.

Starting in 2022, the Cadillac tax would have equaled 40 percent of the value of employer-provided health benefits exceeding certain thresholds, projected to initially be about the 85th percentile of health benefits, or about $11,000 for individual coverage and $30,000 for family coverage in 2022.  The tax would have effectively limited the expensive and poorly targeted tax subsidy for employer-provided health benefits as well as potentially reduced growth in health care costs. However, the Cadillac tax was unpopular with employers, corporate executives, and organized labor and Congress twice-delayed it, before finally repealing it.  JCT projects repealing the Cadillac tax will reduce government revenues by $197 billion over the next ten years.

The annual fee on health insurance providers and medical device tax were both intended to help finance the ACA’s health insurance coverage expansion and to recoup some of the benefits these industries would receive by having a larger population with health coverage.  There was opposition to these taxes from firms in the affected industries and, after coming into effect, Congress suspended the health insurer fee for 2017 and 2019 and suspended the medical device tax for 2016 through 2019.  JCT projects repealing these taxes will reduce government revenues by $151 billion over the next ten years.

Repealing the ACA excise taxes may be popular with industry representatives and possibly voters, but it represents a lost opportunity to better target tax subsidies for health care and to help control health care costs.