Rand Paul’s Tax Cut Isn't Quite What It Seems

Unlike those GOP presidential hopefuls who say their tax reforms would raise the same amount of money as the current tax code, even when their actual proposals would not, Senator Rand Paul isn’t being shy. He’s promising a great big fat tax cut (described in this Wall Street Journal  column). And more than that, he’s designing it in a way that would fundamentally restructure the federal government as we know it.

But Paul is probably underestimating the cost of his plan. He claims he’d cut taxes (and thus increase the debt) by $2 trillion over 10 years. But he’s using a very aggressive analysis that assumes powerful growth effects from the tax reductions. The Tax Foundation, which Paul cites in his column, projects the plan would add $1 trillion to the debt under its dynamic analysis but $3 trillion under a more traditional calculation.

Paul wants to replace the individual and corporate income tax, the payroll tax, the estate tax, and federal excise taxes with what he calls a flat 14.5 percent levy on all personal income and business activity.

But it isn’t quite that: His business levy is really a Value-Added Tax so wages would be taxed at both the individual and business level at a combined rate of about 27 percent. In effect, Paul would replace today's dedicated Social Security and Medicare payroll taxes with a new tax, but one that does not directly fund the big federal retirement programs.

On the individual side, Paul would keep deductions for mortgage interest and charitable giving, exempt from tax the first $50,000 of income for a family of four, and retain the Earned Income Tax Credit and child credit for low- and moderate-income working families. (The Tax Foundation assumes that Paul would also keep tax preferences for retirement savings and employer sponsored  health insurance). As a result, the effective tax rate for many households would be lower—and in many cases significantly lower—than 14.5 percent.

How does that compare to the current tax law? My Tax Policy Center colleagues have not modeled the latest Paul plan: They’d need more details than Paul has disclosed to do that. But we can use some back-of-the-envelope comparisons to give you a rough sense of how things would change.

The Tax Policy Center figures the average effective federal tax rate in 2014 was a bit more than 19 percent.  TPC included individual income taxes, estate taxes, payroll taxes, and corporate income taxes. That’s pretty close to the tax system Paul would dump. But note that TPC measures taxes as a share of expanded cash income while Paul's rate would be applied to AGI less those few deductions. 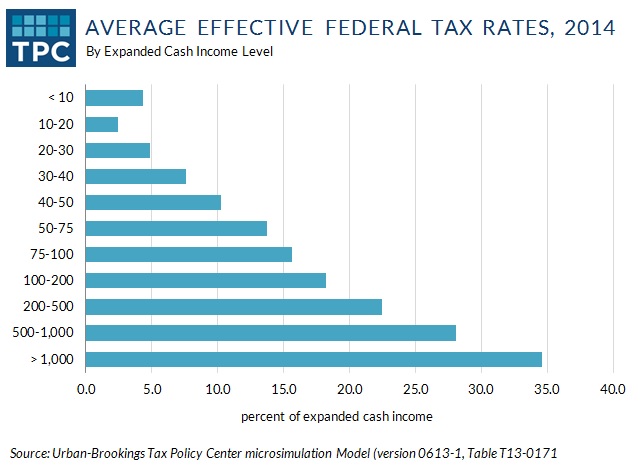 In the current system, the tax burden is quite progressive. In general, the more you make, the higher your effective tax rate.

What would Paul do for these different income groups?

For those at the top, the tax cut would be enormous. He starts with that 14.5 percent rate, which is nearly 60 percent less than their current average rate of 34.6 percent. But because taxpayers could retain deductions for mortgage interest and, especially, charitable giving, Paul’s effective rate for the many of the highest income households would be even lower.

People at the bottom would also pay much less than 14.5 percent. Because Paul would repeal the payroll tax, keep the EITC, and grant a generous income tax exemption, this group would pay an average effective federal rate of close to zero, or perhaps even below zero. In the last presidential election, Mitt Romney criticized low-income people who did not pay taxes. Paul would significantly increase their numbers.

Harder to figure what would happen to people in the middle, though the average change in their effective tax rate would likely be much less than those at the top and bottom.

Of course, tax cuts this big would put enormous fiscal pressure on all parts of government, from Meals on Wheels to the Pentagon. And by eliminating the payroll tax, Paul would end dedicated funding for Social Security and Medicare and fundamentally change the nature of those programs.

We may learn more about Paul’s idea as time goes on, but tax cuts of this magnitude would represent a sea change in how the federal government raises and spends money. An even bigger change, perhaps, than even Paul wants to acknowledge.